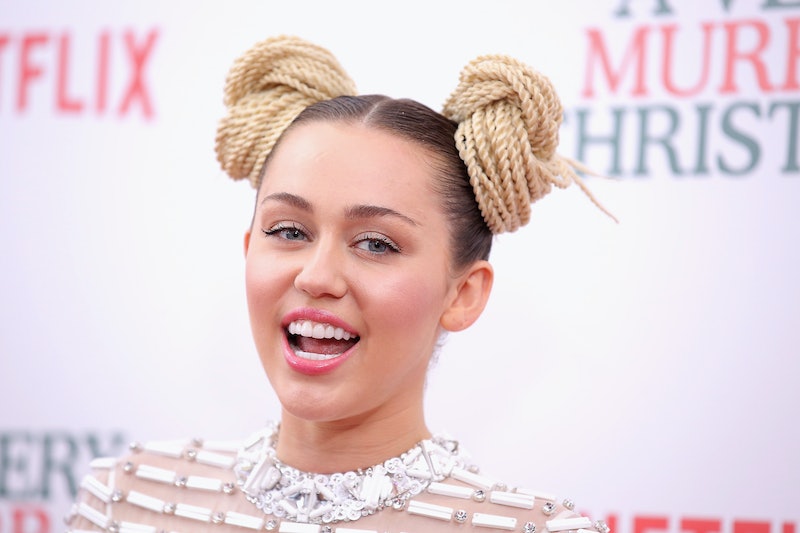 She's just being Miley... that's a line that we've become used to hearing (and using) from occasion to occasion, but this time, things might be a little different. Friday night, Miley Cyrus released the music video for "BB Talk," her new single off of her latest album Miley Cyrus & Her Dead Petz, and, given its inclusion of Cyrus dressed like a literal infant, it sure has people talking. But, we should be talking about a lot more than her expletives and her various baby costumes.

When I first saw that the "Wrecking Ball" singer had released a new video, before I even watched it, I assumed that it would controversial. And, upon first glance, I thought I was right — considering she's dressed up as and acting like an infant, the video looks like a metaphor for the "baby talking" and the childish/immature demeanor that Cyrus claims people project onto her in "BB Talk."

The "We Can't Stop" songstress spends the duration of the video lamenting about the annoying, "cute-sy bullsh*t" that some ladies might like in a relationship, but she would rather do without. She dances around in a baby crib, sucks a pacifier, and dances in a baby suit with some of her baby friends, just doing baby things. But if you watch the video for yourself, you'll see that there is a lot more to be said about the video than it seems:

Personally, I think Cyrus is talking about a lot more than a childish relationship and overuse of emojis while texting in this video. Upon closer examination, through literally dressing up as an infant in this video, Cyrus could be smartly hinting at the fact that the music industry has a way of often infantilizing today's pop stars — she's 100 percent right.

How so, you might ask? Let's get inside Cyrus' head so we can understand the message she's trying to bring across...

She could be talking about one of two things, but knowing Cyrus, she could be talking about both: One, putting her and other pop stars in situations where they are belittled and made to look like they lack intelligence; and two, the fact that in the music industry, female artists are applauded and commended for acting "innocent and helpless" to make themselves appear "cute." Neither are OK, and both open up room for conversation and a reality check.

I know that it's a tired saying, but celebrities are normal people. Nothing makes it OK for people to belittle pop stars by infantilizing them, taking away their sense of privacy, speaking to them in condescending ways when talking about their careers and personal lives, or putting them in situations that make them appear as if they aren't intelligent. This isn't a fair way to treat anyone, pop star or not. This could be a message Cyrus is trying to deliver with this video.

The same goes for over-exalting and obsessing over "cuteness" and "innocence" when it comes to female pop stars. Of course, there is nothing wrong with having that image — everyone is entitled to their own form of expression, as long as that expression is not offensive to any other individual or group of individuals. However, it's not OK to put this image on a pedestal, and then to tear these artists down when they try to "shed" that image, or to call women offensive names when they don't portray that image at all. Having gone from Hannah Montana to being herself, Cyrus is one female pop star who has experienced a lot of this over the course of her career — so it should come as no surprise that she is passionate about the topic.

This in mind, I'm fairly certain Cyrus' music video for "BB Talk" is talking about a lot more than just childish relationships. It opens up room for a lot of thought about what's going on in the music industry today, and about what needs to change. Snaps for Cyrus!