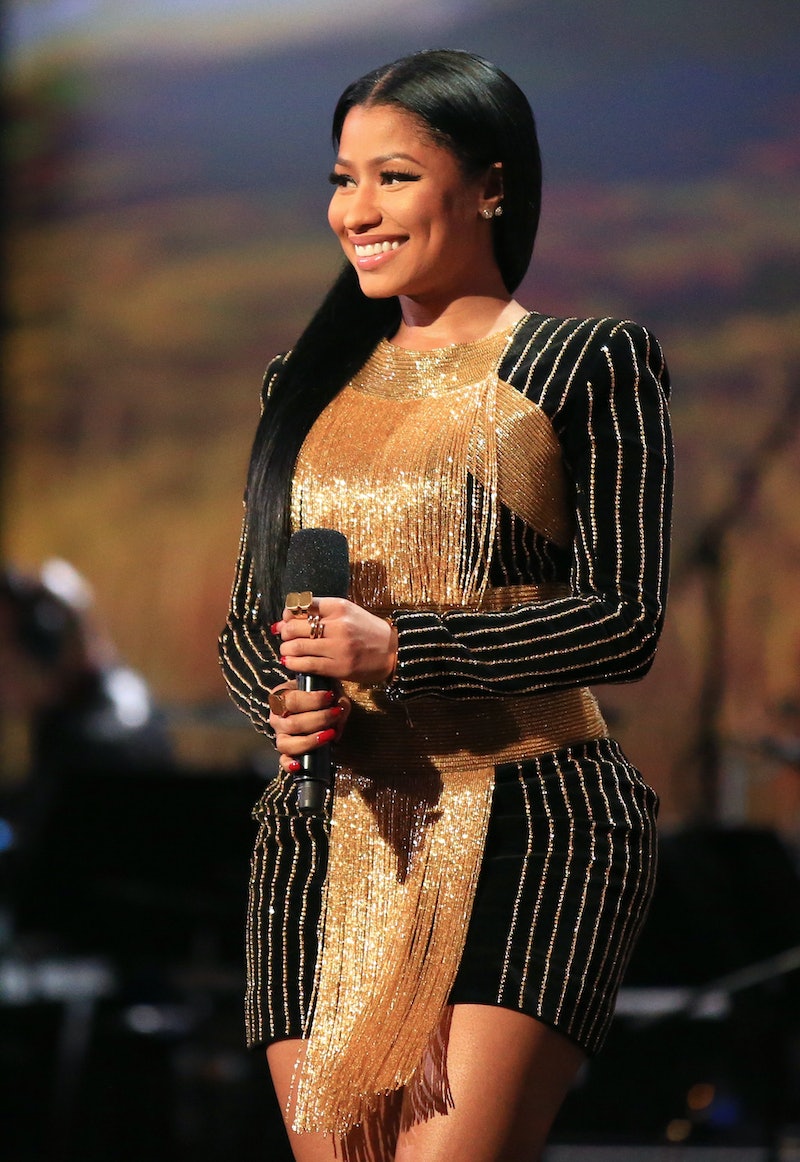 Once again, my Twitter feed has been made that little bit brighter by the queen of rap. On Dec. 11, Nicki Minaj tweeted a body positive speech against sexist retweets by entertainment news site Bossip. The conversation began innocently enough, with Bossip questioning the lack of female rappers getting mainstream visibility this day in age. And it's a valid question that probably could have led to a much more productive feminist debate.

Minaj caught sight of the inquiry, and began to tackle the sensitive issues of sexism and racism in the music industry. However, the entertainment news' Twitter account responded to Minaj's entry into the convo by retweeting a range of answers to the question it originally posed to its 248,000 followers, including one extraordinarily sexist and body shaming tweet, which credited Minaj's fame to her "buying an ass" in order to "blow up." When you consider Minaj's public outcry against MTV's Video Music Awards this year, and her ability to defend her POV, Bossip's decision to enter a social media feud of sorts with the musician seems more than a little unwise.

To follow, Minaj posted a series of tweets offering valid insights and critiques; not just on the body shaming she has to deal with as a female rapper, but on the sexism she encounters on the daily.

As she listed her achievements, she (alongside many of us) were left to question why Minaj doesn't arguably receive the same respect and recognition as her male colleagues.

Instead of backing down, Bossip proceeded to retweet more insults against Nicki Minaj, as well as adding its own commentary against the star. Rather than acknowledging Minaj's insights towards its original question — "where are all the female rappers?" — it continued to attack the musician instead, by agreeing with a tweet in which Minaj was shamed for loving "the race card more than her American Express."

But in true Minaj style, the rap star refused to back down; and when backed up by her ever-faithful fans, her words of wisdom sunk through even more. Her outspoken nature regarding social issues as well as her self belief and confidence are some of the reasons why I perceive Nicki Minaj as a body positive role model. She delivers food for thought that doesn't just benefit herself, but others who may read it. To the world, Minaj is able to offer detailed insight and hard-hitting facts about her identity as a black female artist in the music industry, backed up by her own accomplishments which, as she says, would have any male artist "hailed as a GREAT."

Once again, Minaj has proven herself a feminist icon and role model. And if you only think of her as her ass, please be prepared to feel the wrath of her immense wit and intelligence.

More like this
Most Comfortable Underwear For Big Butts
By Audrey Williams
42 Black Owned Fashion & Beauty Brands To Support Today & Always
By Mekita Rivas, Shea Simmons, Kui Mwai and Dominique Norman
Everything You Need To Know About The "Jellyfish Haircut" Trend
By Audrey Noble
Myra Magdalen Is TikTok’s Queen Of Chaotic Maximalist Fashion
By Sophia Moore
Get Even More From Bustle — Sign Up For The Newsletter