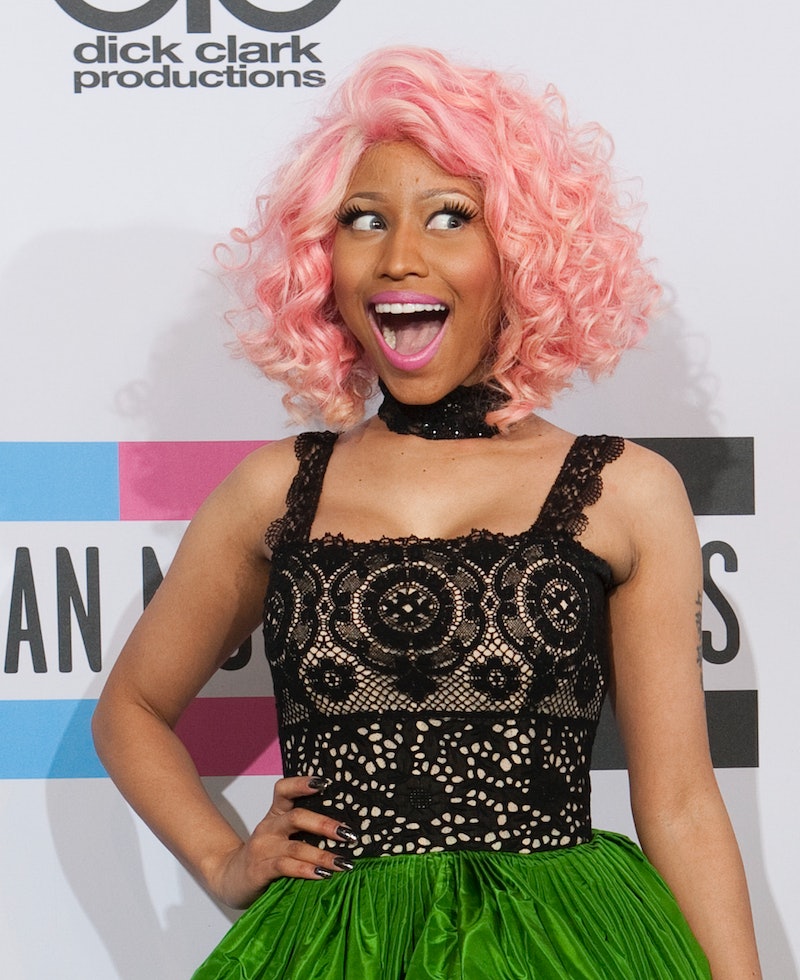 Nicki Minaj doesn’t seem like the automatic go-to for body positivity, especially after all the times Nicki caused controversy these past few months. But you’ve got to make mistakes to learn from them! The problem with causing controversy doesn’t just lie with causing it, but oftentimes in how people react when they find out they've done wrong. Nicki Minaj apologizes eloquently, however, which takes guts for anybody — especially a public figure.

Nicki uses her place in the public sphere to promote body positivity in the best ways. She doesn't just focus on one issue but a variety, and you can't attend one of her concerts without her telling you to stay in school. She used to radiate positivity through pink wigs and outrageous outfits, but now she's preaching to us through subversive music videos and detailed personal accounts. She holds nothing back; not just for her own benefit, but for anybody who bothers to look past the harajuku hype and butt BS that shrouds her career. Through caring about Nicki, and seeing Nicki care about her fans, her influence has done a lot for me.

Whenever I’m feeling kind of low about myself, I imagine what Nicki Minaj would say to me if she could hear me. Is this brealette too revealing Nicki? Nah, get those ladies out! You look great! I think my ass doesn’t look as cute in these jeans as I thought it did. Your ass always looks cute! In my heart of hearts, I know that if Nicki Minaj was your friend, she wouldn't just be your funniest, loudest mate, but the most supportive as well.

There’s a lot more to Nicki Minaj than, "F*ck them skinny bitches," and she’s shown how much she cares about supporting all kinds of women over and over again.

In this preview for "My Time Now," Nicki Minaj expertly takes apart the differences our society places between an authoritative female and an authoritative male. She lists all the things expected of her that are not expected from her male colleagues. All whilst expertly fixing her makeup and hair. Nicki gets it — she knows what’s expected from her as a woman versus what's expected of her male counterparts, and she’s arguing against it.

Nicki Minaj actively acknowledges that differences in gender go deeper than just "woman" and "man" with a casual tone that does not dismiss but rather reinforces the fluidity of gender.

In an interview with Peter Rosenberg, Nicki goes through her bitch vs. boss argument again:

But my personal highlight is when Nicki actively recognizes the less obvious differences within gender — she calls herself a "woman with a vagina" and acknowledges that there exist women without vaginas, without letting the host turn it into a joke. Not only that, but this kind of clarification isn’t just a one-off for a radio show, but seen again and again (including on her Twitter account).

3. Nicki says Drake's "obsessed with thick women" and he agrees

As always, let’s ignore that Chris Brown exists. "Only" was one of the most controversial songs of late, partially due to the Nazi imagery used in the lyric video (though later apologized for) but also due to the sexually explicit lyrics. On first listen, the lyrics can seem horribly sexist, but on closer inspection, that’s the point. Nicki is speaking out against the inherent sexualization of female artists and the assumption that her fame has been brought about due to sexual favors, and not due to her incredible talent.

4. Nicki Minaj doesn’t want your Anaconda, regardless of her buns

I personally feel the message of "Anaconda" was completely overshadowed by so many people who focused on the line "f*ck the skinny bitches" instead of the rest of the song and video. The sample of Sir Mixalot’s "Baby Got Back" is utilized artfully to argue against patriarchal standards of beauty: Your anaconda "don’t want none unless I got buns?" Well, what if these "buns" don’t want you? What if women are sexual for themselves and not for the enjoyment of men? That's the predominant question put out into the world as Nicki gives Drake the best lap dance ever witnessed just to cause him visible discomfort. Because what if — radically — women are able to exist for themselves and not for the enjoyment of men?

5. The importance of female friendships

A huge part of Nicki’s fame has come from her feuds with other female rappers, like Lil Kim or Iggy Azalea, so seeing her friendship with Beyoncé lights up my heart. From Beyoncé celebrating Minaj’s birthday and gifting her with her own personal, diamond "Flawless" necklace, the two demonstrate the importance of supporting other women instead of tearing them down. This alliance of two of my feminist heroes isn't an accident: Their love and uplifting nature towards women reflect beautifully off of each other. Their collaborations are full of support and their performances together have only ever shown love between these two favorites. The "Flawless" remix was even remixed again by the best faces of body positivity this year: Gabifresh, Tess Munster and Nadia Aboulhosn — another reminder of how fabulous and uplifting female friendships can be.