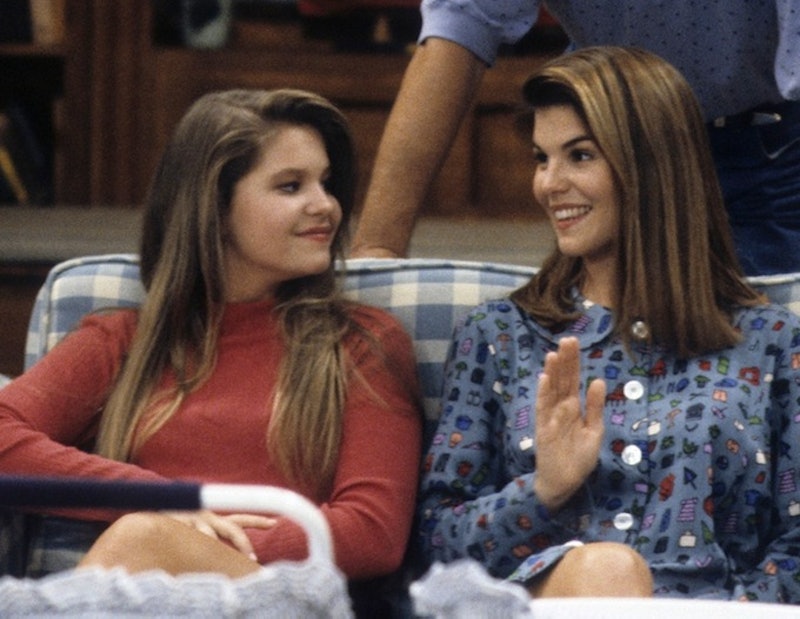 D.J. Tanner is all grown up on Fuller House, but as the first teaser trailer Fuller House shows, you're never too old to need your family. In the emotional trailer (seriously, grab the tissues), fans don't get to actually see the Tanners, but they do get a look at the iconic house, which has now been redecorated as D.J., now a pregnant mother of two boys, gets ready to move back in after losing her husband. The now widowed eldest daughter of Danny Tanner is attempting to do what he did nearly 30 years ago: start over with a little help from her family. She'll have her sister Stephanie, her best friend Kimmy Gibbler, and most of her family right there to help her deal with anything life throws her way. Of course, this is exactly like the original series when the Tanner family was always there for D.J. through every step of her growth and maturation.

Full House has always been a show that sends the message that your family will be there for you. When D.J. was younger, her family helped her deal with everything from body image to school bullies to annulling a marriage. Sure, the lessons were sometimes very dramatic, but Full House was always a sweet look at how much you need your family in times of duress. D.J. certainly had more than a few of those times during the eight seasons and 192 episodes of the original show.

1. That Time She Moved Out

There is a moment in pretty much every older sibling's life when they're forced to share a room with one of their younger siblings. For D.J., it seemed like the end of the world when her dad told her Stephanie was going to move in with her. Thus, she decided she was going to move out. She only got as far as the garage, but, eventually, Danny stepped in and asked D.J. what was really going on. As it turns out, she was upset about everything disappearing: first her mom dies, then her grandma moves out, and now she loses her room. But, as Danny tells her, this is the exact time that they need to stick together. It seems to be a message D.J. took to heart, since the two sisters will once again be sharing the same digs in Fuller House.

2. That Time She Thought She Was The "Ugly Duckling"

After her first boyfriend, Michael Montfort, dumps her for Kathy Santoni, our little Donna Jo is heartbroken. Danny, Joey, and Jesse try to help by telling her the story of "The Ugly Duckling," and, obviously, this doesn't go well. D.J. thinks she's the ugly duckling in this case until Becky comes to share her womanly wisdom. She makes it clear this boy blew it and asks D.J. to list all her good qualities, which includes "I'm nice to animals. I have great hair." And, of course, she tells the guys to never tell the story of "The Ugly Duckling" again — unless it's about some other kid.

3. That Time She Goes On A Crash Diet

D.J. wants to look like those models in her magazines so she decides to stop eating for three days and start exercising a lot. After she gets lightheaded on the elliptical and doesn't want to taste Joey's pasta sauce (her favorite), her family starts to get worried. This episode may be dramatic, but it deals with body image in a way that kids can truly relate to. Danny let D.J. know that it doesn't matter what she looks like in a bathing suit; it's what's inside that counts. That's a lesson I still carry to this day.

Little 10-year-old D.J. learns a lesson about gambling and honesty in this two-part episode that has the family staying in the fabulous Ali Baba Hotel and Casino. While Joey's watching the girls, he tries to teach them about gambling — as in how to stay quiet while he does it. While he goes away to get a bucket to hold all his earnings, D.J. decides to pull the lever, and, low and behold, she's a big winner. Joey wants to keep the money, but Danny is too honest to take it and instead teaches the girls that gambling and lying are both very bad.

5. That Time She Gets Teased By Some Mean Girls

D.J.'s first day of seventh grade is tough. Not only does she get called a "scrub" by some mean girls, she shows up wearing the same outfit as one of the lunch ladies. She ends up eating lunch in the phone booth all alone. This is another time when Becky steps in and saves the day, showing D.J. she can feel more confident about herself with a few makeup tricks. By the end, she's sitting with a bunch of her new friends from English, instead of making collect calls.

6. That Time She Marries A Greek Boy After Walking Around A Table

This is classic sitcom fare: the unexpected wedding. This time, it was D.J. unknowingly getting married to a young Greek boy named Silvio that's there with Jesse's relatives, all because she walks around a table. Apparently, this is a Greek custom that no one's ever heard of. While nowhere near as serious as some of the other moments on this list, this did force the family to come together to make sure D.J. got this thing annulled so she wouldn't remain an accidental underage bride.

Now that D.J. is an adult, her family will still be there for her, helping her deal with new challenges that come with being a single mom. That much is clear from the first trailer. Even though D.J. says she should have gotten movers, Becky's there to make it clear they would never let that happen: "You have us." There will be some major differences between Full House and Fuller House , but viewers can count on this family to be there for D.J. during the tough times, just as they always have been.