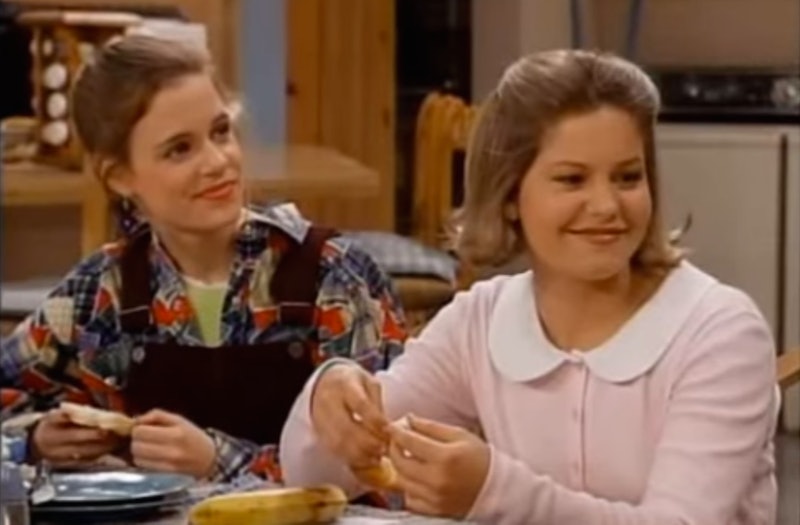 It's happening friends, it's actually happening! John Stamos confirmed on Jimmy Kimmel Live! that Netflix will produce the Full House sequel Fuller House (clever) for 13 episodes that will focus on DJ Tanner, Stephanie Tanner and DJ's best friend Kimmy Gibbler. Stamos will also produce and guest star. Now that we know for sure that this blessed series is coming our way in the not-so-distant future, what can we expect from it? We already know what questions we needed answered about DJ and Kimmy, what dream plots we'd like included and what guest stars we'd love to see to make the Full House reunion a raving success. But what about focusing on what makes the show different for a new age?

The series ended 20 years ago this May, and things are a lot different now. How will DJ, Kimmy and Stephanie navigate the new world, especially as adult women with careers, relationships and families of their own? According to Stamos, we know that DJ will definitely have her own family. She has three boys, she lives with Stephanie, and Kimmy is still her neighbor but now with a child of her own.

Now that we have new information about where their lives will be begin, there are so many things that need to be addressed. Particularly how have new technology and innovations from the last 20 years affected their lives?

1. DJ & Kimmy Have Kept In Touch Via Social Media & Now Live Next Door

It's likely that, after high school, the girls drifted apart a bit as they went off to college, or whatever Kimmy ended up doing. (Because she's a free spirit and could have gone backpacking in Budapest for all I know.) However, thanks to social media, there were still always able to stay in touch through liking and commenting on Instagram pics, Facebook messages, and sending tweets. Now that the women are almost 40 (!), they've settled down in their own ways, have reunited and are even living next door to one another just like the good ol' days. So basically they'll do what the real-life actresses do on a daily basis with each other.

If Kimmy is still single when Fuller House airs, it would be awesome to see her using the latest dating apps and websites to find love. Someone like Kimmy could probably do well on OKCupid, Tinder or even Match.com. Plus, watching her go on semi-blind dates would be hilarious — if only to see that strange lovable personality in date mode.

Perhaps an old Elvis impersonation he did, or his pre-wedding skydiving act, goes viral on the Internet. Everyone will have a comment to make about that video, and DJ and Stephanie won't hear the end of it. I'd love to see how the girls react to their uncle getting his 15 minutes of fame for a not-so-likely reason. That is if and only if Jesse didn't already become a famous rockstar and then hang up his guitar to build a music empire. Have mercy!

Look, she has three boys. One of them, or at least their girlfriends, is bound to love Taylor Swift. Plus, don't you think she'd be interested in doing a cameo? She seems like she'd be game for a bit of nostalgic fun.

5. DJ & Kimmy Learn About The Selfie & Overuse It

Again, these women are almost 40 now. They're likely overusing the selfie, just like many of us in the age ranges of high school and on.

6. DJ Gets Back In Touch With Old Flames Via Facebook

Now that we know DJ married someone with the last name Fuller, and the man sadly passed away, maybe she will reconnect with old flames like newly divorced Steve on Facebook. Maybe Steve then decides to be a friend and support DJ through the difficult time of dealing with the death of her husband while being pregnant. It might be too soon for them to start up a romance in Season 1. But, if Steve is willing to be there for her in the long run, perhaps we could see their romance re-blossom.

Remember when DJ was so worried about her body before a pool party that she stopped eating regularly and worked out so much at the gym that she almost passed out? What if DJ still has body issues from time to time like a normal human being, and made the self-conscious choice to photoshop a picture of herself on Instagram like many celebs even do every day?

Of course, Kimmy and Stephanie would come to her rescue by telling her to love her body for how beautiful it is. Considering how Full House liked to tackle a few serious subjects like this from time to time, this storyline could fit in perfectly on the new series.

8. DJ & Stephanie Donate Too Much To A Ridiculous Kickstarter Campaign & Regret It Instantly

Because Kickstarter and other crowd-funded sites are huge right now, and because DJ and Stephanie have made ridiculous mistakes in the past, this could totally happen. Remember when the two sisters made a down payment on a horse and tried to keep it from the family? Yup, just imagine that, but with Kickstarter and some nonsensical items they'd get for their donation. Let's face it, it would probably be something horse related.

She has experience in all kinds of insane matters. Would it be so crazy to think people would actually listen to her podcast? I don't think so. I think she could become a huge success.

Come on, Mary Kate & Ashley Olsen, all I'm asking for is an appearance on Skype or FaceTime! I know you don't act anymore, and being on Fuller House is unlikely, but surely this isn't asking too much.