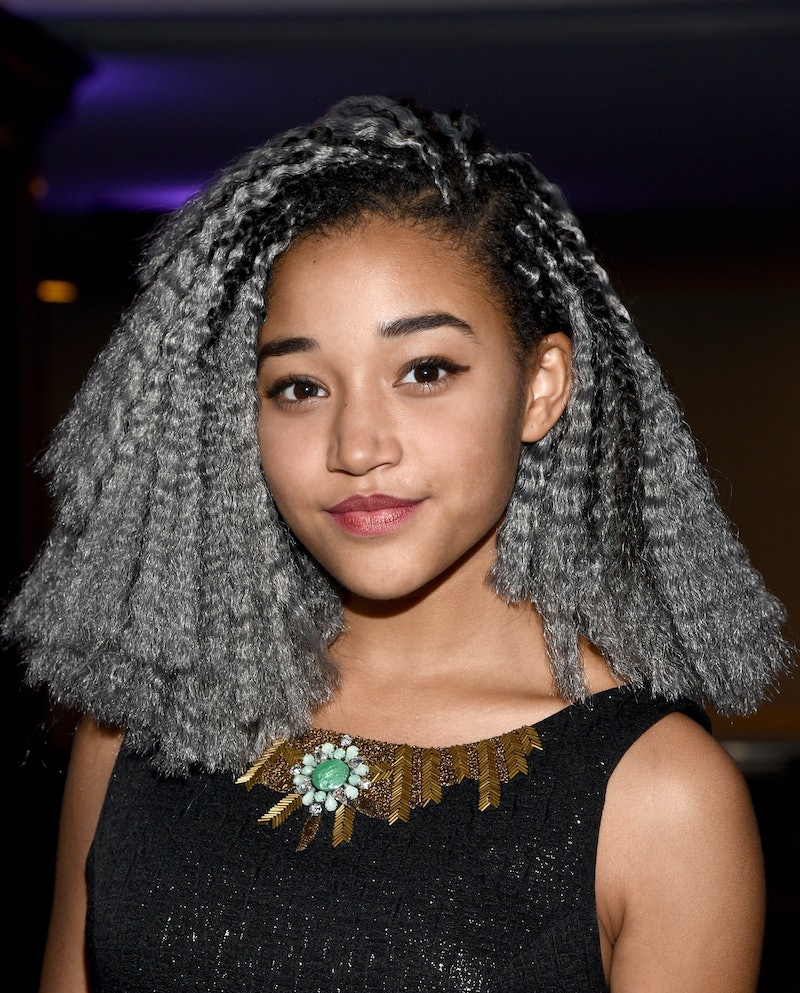 As someone who is so impressed by the cool teen revolution, I’m so happy that Amandla Stenberg and Rowan Blanchard were both named Feminist Celebrity Of The Year by the Ms. Foundation For Women. Winners were chosen by voters through an online poll, and Stenberg and Blanchard topped the list, the top 10 of which boasts some of the most formidable women around, including Supreme Court Justice Ruth Bader Ginsberg and media mogul Shonda Rhimes. But the win was well deserved for the two teens, so three cheers for such eloquent and just damn smart teenagers who are carving a new path for young women to discover feminism earlier.

Even since starring in the Hunger Games as Rue in 2012, 17-year-old Stenberg has been a bold, outspoken activist, focusing on issues of race, intersectional feminism, micro-aggressions, and cultural appropriation. Her nuanced understanding of such issues leaves me in awe. Not only is she knowledgeable, but she isn’t afraid to educate others, either.

Perhaps her most notorious achievement this year was when she made the video “Don’t Cash Crop On My Cornrows,” a blazing takedown of appropration of black culture. Earlier this year Dazed named her “the most incendiary voice of her generation,” for accomplishments not only like her fierce deconstruction of cultural appropriation, but also for releasing a comic about a mixed-race female superhero and joining and boosting the Art Hoe movement with fellow super-woke teen, Willow Smith.

It’s also impressive to see Blanchard sharing the top spot. The 14-year-old star of Girl Meets World, also has an impressive, surprising, and well-informed understanding of feminist issues. She has spoken out about sexism on the red carpet, addressed the issues with white feminism, and educated her fans and followers about why feminism needs to be intersectional. This year she also spoke at the UN Women conference giving a speech about gender equality.

Blanchard also contributed to the conversation about the gender pay gap in Hollywood in a straightforward way and it was amazing to watch her cut to the heart of the issue: that women in Hollywood were aware of the inequity but the very nature of the sexist industry made them feel pressured to bite their tongues, lest they gain a reputation of being "a crazy difficult feminist."

Obviously, both Stenberg and Blanchard are wise beyond their very few years. And they embrace their positions as activists and are already using their fame to usher a new generation of girls and young women into the world with a better understanding of its inequalities.

Stenberg and Blanchard beating out Bader Ginsberg, Rhimes, Margaret Cho, and Viola Davis, to name a few, proves that the Ms. Foundation is reaching younger women whose feminist celebrity heroes skew young. And if these amazing teenagers are reaching such a large audience, then they have really fulfilled the qualifications of the win. According to Ms. Foundation for Women President and CEO Teresa C. Younger, "The survey acknowledges celebrities who not only publicly identify as feminists, but work to change conversation around diversity, inclusiveness, and intersectionality.”

I can’t help but be jealous that these young, famous women are making themselves so available to their fans, and providing education and support through using their fame for activism. But I am also so grateful for these whip-smart and powerful young women — along with Blanchard and Stenberg, there’s of course Kiernan Shipka of Mad Men, Willow and Jaden Smith, Zendaya, and Rookie founder Tavi Gevinson, to name of few — who are proving that teenagers are intelligent and have the power to enact change.

Cool teens are here to stay. I wish they would let me in their club, but at least I know the future is in good hands.

More like this
Adele’s All-Female Lineup Includes Kacey Musgraves, Mahalia, & Self Esteem
By Shahed Ezaydi
Tamra Judge & Vicki Gunvalson Gave A Hopeful “Tres Amigas” Update
By Brad Witter
What Is the Net Worth Of Each 'Stranger Things' Season 4 Cast Member?
By Hugh McIntyre
These 10 Wild Real Housewives Fights & Moments Are Andy Cohen’s All-Time Faves
By Grace Wehniainen
Get Even More From Bustle — Sign Up For The Newsletter