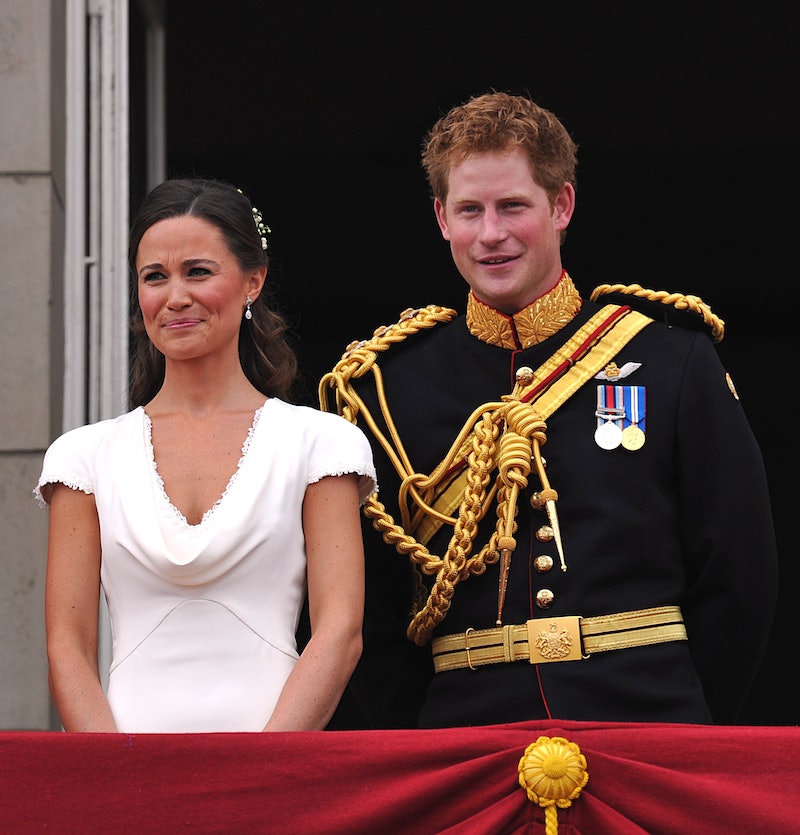 When it comes to relationship goals, Prince William and Kate Middleton take the cake. After all, they had a royal wedding and two incredibly adorable children together. It's the stuff fairytales are made of. But what if this wasn't the only royal romance in the family? Rumors recently surfaced that Prince Harry is dating Pippa Middleton. Yup, two pairs of siblings dating — now that would be entertaining. Although it's likely just a rumor (because I think Harry could do better than using pasta carbonara and Adele songs to woo Pippa), it is fun to imagine. Amongst all these rumors, I can't help but wonder: Has this ever happened before? Has a pair of royal siblings ever married members of the same family?

Unfortunately, here in America, I didn't learn as much about the royal family in school as I would have liked. While it makes sense that my classmates and I were memorizing former U.S. presidents and not studying the monarchies, it just made me have to dig a little deeper when trying to figure out the answer to this question. While it's impossible to know for sure whether pairs of royal siblings have gotten together before (there's a long history of royal families), there are a few interesting facts I uncovered about the royal family tree that relate to this whole Prince Harry and Pippa scenario.

1. This Hasn't Happened (At Least Not In Recent History)

The House of Windsor has ruled the U.K. since 1917. Queen Elizabeth II married Philip Mountbatten in 1947. Her only sister, the late Princess Margaret, was married to Antony Armstrong-Jones. There's no relation between Mountbatten and Armstrong-Jones — so this wasn't one of those royal brothers dating a pair of sisters situations.

As for Elizabeth and Philip's four children — Prince Charles, Princess Anne, Prince Andrew, and Prince Edward — none of them wound up in this kind of scenario either. Although they all have been married at least once, none of them married members of the same families, akin to what would happen if Pippa and Harry tied the knot after Kate and William.

2. There Was A Bit Of A Sibling Love Triangle

Looking at Harry and William's parents, there was actually a different sort of sibling situation that happened there. Their father, Prince Charles, actually dated their late mother Princess Diana's sister Lady Sarah before he married Diana. In fact, Sarah is the one who introduced Charles to his future wife and once called herself "Cupid" for doing so. That's fascinating, huh?

I guess it's different with royal families, but if thinking about modern times, I'm pretty sure Kourtney Kardashian would flip out if, say, Khloé eventually wound up with Scott Disick. Dating siblings' exes is typically frowned upon, but at least it worked out in this case.

3. Another Sibling-Related Situation Happened, Too

In 1891, Queen Elizabeth II's grandmother — Victoria Mary of Teck — was engaged to marry the Duke of Clarence, Prince Albert Victor. However, Prince Albert Victor died before their marriage. She soon was set up with his brother Prince George V. They became the Duke and Duchess of York. Again, not the same as the Pippa/Harry and Kate/William situation, but an interesting intersecting of families nevertheless.

The moral of this story? There are lots of interesting tidbits about the royal family history. But when it comes to royal siblings marrying another pair of siblings, this would be something new — at least in the House of Windsor's 98-year history. So for everybody rooting for a Pippa and Harry romance, I now understand why!