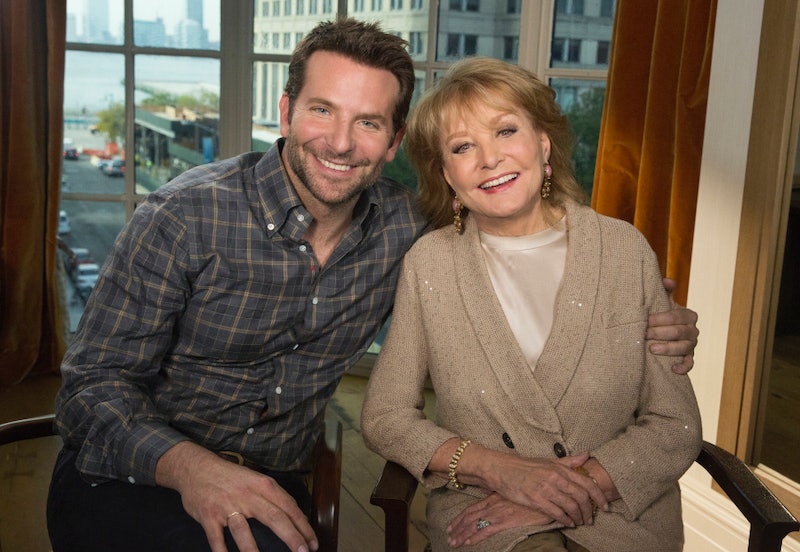 Did Barbara Walters list Bradley Cooper as one of her 10 Most Fascinating People of 2015 because she's got the hots for him? Based on the interview between Barbara Walters and Bradley Cooper that aired on ABC on Dec. 17, that just may be the case. In their easygoing interview, Walters proved that even a professional like her needs to swoon over Cooper sometimes.

Although their interview covered serious topics like the death of Cooper's beloved father back in 2011, the most buzzworthy aspect was how flirty the pair were. The banter started from the get-go when the actor admitted that he wished his name was Charlie Cooper (after his dad) and she said she always wanted to go by Babs. They decided from there on out, they would refer to each other by the playful nicknames.

In the footage where Walters described why Cooper was chosen as one of the "Most Fascinating People" she acknowledged that he's the embodiment of the phrase, "Men want to be him, women want to be with him." And her first question to him started with "Many women see you as the perfect man ..." and then she asked him to tell her something awful about himself. His answer? He's obsessive and likes to talk, which is pretty much the equivalent of "I work too hard" in a job interview, but since it's Bradley Cooper, I'll accept that answer.

Things heated up even more when Walters reviewed how Cooper was a working actor in films like Wet Hot American Summer and Wedding Crashers for many years before making it big. Turns out, his agent said that Cooper wasn't considered "f--kable" at that time. And with that information, Walters wondered (like everyone else did) how the one-time receiver of People magazine's prestigious title of Sexiest Man Alive was ever considered unf--kable. Lucky for Cooper, Paul Rudd and Jack Black turned down the role of Phil in The Hangover, and I don't think Cooper has ever been considered not "f--ckable" again.

And Walters, who used the profane word back and forth with Cooper, agrees. Although this footage wasn't shown when the special aired on ABC, Walters did tell Cooper, "I could just sit and stare at you but that would take too much time." Following with, "But I, I find you very screwable." Get it, Babs! (And don't worry, Cooper wasn't just there for his looks since Walters acknowledged how nice of a man he is and that it's more of a matter of "when," not "if" Cooper will win an Oscar.)

The interview wrapped with Cooper doing an impersonation of his American Sniper director Clint Eastwood, where he said things like, "Barbara, you're looking really good" and then called her "sexy." The 86-year-old Walters did comment on the fact that the 40-year-old actor isn't married, so with chemistry like theirs, maybe Babs and Charlie will be the next superstar couple come the year 2016 — that would definitely qualify them as "Most Fascinating."

More like this
Are Gemini & Scorpio Compatible In A Relationship?
By Kristine Fellizar
This TikToker Has Genius Advice For Boosting Your Dating Confidence
By Lexi Inks
15 Flirty "Thinking Of You" Texts That’ll Make Your Crush’s Day
By Lexi Inks
The “Rules For Dating” TikTok Trend, Explained
By Lexi Inks
Get Even More From Bustle — Sign Up For The Newsletter