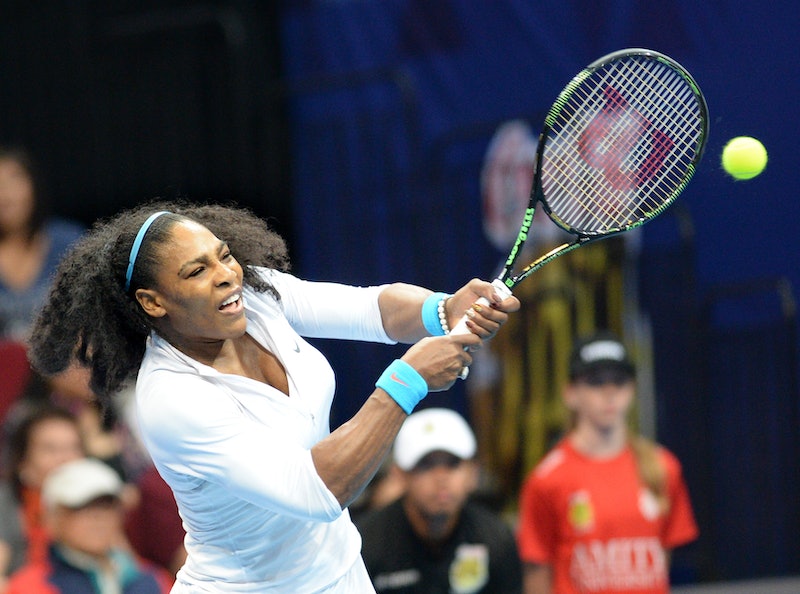 When I was a middle school tennis nerd, I had a strange relationship with tennis star Serena Williams. For starters, I was slightly frightened of her. The way she glared at her opponent in that split second before she tossed the ball for a serve gave me goosebumps. Her confident walk onto the court sent chills down my spine. And every once in a while, the outcry that accompanied her winning shot made me jump out of my seat.

And yet, she was the one I always channeled when I played tennis. I imagined that I was her when I approached the net, and I also pretended she was in my box, giving me tidbits of advice. She was the woman in sports my eyes were always stuck on, even during those lulls in her career when people doubted whether she would make a comeback. At the same time, though, I never felt comfortable saying aloud how in awe of her I was. There was always something stopping me from coming out and calling her my favorite player.

When Serena Williams was named 2015 Sportsperson of the Year by Sports Illustrated, I reverted back to my teenage self. By that, I mean that I got super emotional; I cried and laughed, and then I squealed and cried some more, until I ended up a pile of twisted sentiments on my unmade bed. Her win was a significant achievement for the history of sports, not just tennis, in many ways, but there was something about the news that felt deeply personal for me.

A whole array of memories suddenly flooded my head when I saw her on the cover of Sports Illustrated. I remembered how everyone talked about her when I was growing up — my tennis-loving parents, fellow tennis players, and neighbors who merely liked to watch every US Open. They were all in agreement; she was amazing, she was nearly invincible, her level of defensive play was unmatched, etc.

But there was always something else attached to the end of these statements: "She's great, but... does she have to be so rude?" "That was amazing, but... have you seen how gross and manly her body is?!" "Nobody can beat her! But she's just not very likable." When people spoke about her, I noticed that they also had a habit of contrasting her "crappy attitude" to with those of other players like Justine Henin and Maria Sharapova — two light-skinned, light-haired, thin women who apparently had graceful and appropriate levels of sportsmanship, compared to Serena.

Thinking back on it, no wonder I felt weird about pledging my allegiance to her. No matter how successful she was, nobody in my rural Southern hometown seemed to like her all that much. And there wasn't any space for somebody like me to speak out on the matter.

These memories are, first of all, a distinct reminder that there is a race problem present in the sport of tennis. Did you know it's the fourth most popular sport in the world, only behind soccer, cricket, and field hockey — yet it's overwhelmingly dominated by white players? Over the last 90 years, only three nonwhite men have won a Grand Slam. Two were black — American Arthur Ashe and French Yannick Noah — and one was Asian — American Michael Chang. Over the past several years, only one black man has competed in the a Grand Slam final. In fact, in the men's top 50 draw at the moment, only three players are nonwhite.

Things aren't much better for women: other than Serena and her sister Venus Williams, who is a winner of seven Grand Slams herself, there are only two black women currently ranked in the top 50: Sloane Stevens and Madison Keys. Chinese native Li Na, who is now retired but recently won two Grand Slams, is the only female Asian player we've seen recently in the game.

None of this is surprising, considering the fact that tennis has always been considered a sport for the affluent. It was once referred to as a "posh" game, and the athletes used to run around the court in cardigans. Even now, take a look at all the people who present the shiny trophies and sit in the primetime box seats at every major tournament — you know, the ones who are funding the whole shebang and call the shots. They're typically all old, white dudes.

Of course, this means Serena has endured some pretty serious racism during her career. The Williams' father and coach, Richard Williams, has spoken out about how a 2001 incident in Indian Wells, California, where Serena and Venus were booed by the crowd, was racially charged. Richard told USA Today that one man even yelled at him and Venus, saying he wished that time could be turned back to the '70s, when they would have skinned her alive. As a result, Serena refused to play in Indian Wells for the next fourteen years.

The harassment has only worsened over the years, particularly with the rise of social media. On Twitter, during the French Open this year, Serena was the subject of constant racist attacks, called an animal, a "gorilla." This is just one of countless explicit racial stereotypes that have been thrown at her. Many commentators and fellow white tennis athletes have also been guilty of it; they claim her immense athleticism is simply due to her masculine, aggressive physical structure, which, it is often implied, is a product of being black.

That kind of disgusting, racist talk about Serena felt inescapable to me during my younger years, as well. My tennis coach once called Serena "beastly." A girl on my high school team, who had a particularly stunning kick serve, dubbed Serena "Black Beauty," and everyone seemed to think it was quite hilarious. Both of these people, as well as those who agreed and laughed, were white.

However, many of the people who watched Serena accept Sportsperson of the Year have never even heard about these incidents. They have little idea of the constant racism that she has had to endure, because when Serena is featured in the media, she is usually painted as a villain.

At the 2009 US Open semifinals, while playing against Kim Clijsters, a line judge called a foot fault on Serena during an important second serve. Serena disputed the call, but the umpire still honored it. Upset, Serena whacked her racket on the ground (something pretty much every male tennis champion besides Rafael Nadal has been caught doing on camera) and loudly swore at the judge. As a result, she was painted as a woman "unhinged" who had put on a "shocking display of vitriol" — words used not by a writer on a small blog, but by Liz Robbins in The New York Times.

During the 2011 US Open final, Serena was under fire once again for arguing with the umpire. The umpire had granted Serena's opponent, Sam Stosur, a crucial break point, because Serena's scream of triumph apparently distracted Stosur. Serena refused to back down, just as she had two years earlier, and videos of the spat went viral. Journalists and fans alike raged about her "ugliness" and how "disrespectful" she was. One article, published in Vanity Fair, even claimed that her actions were "bad for the image of the sport."

Watching all this from the sidelines over the years was precisely the reason I got so emotional when she won Sportsperson of the Year. Serena is arguably the greatest athlete of our generation, and she's finally being offered the right kind of public recognition — the kind she should have gotten a long time ago. More importantly, though, this win is about so much more than her 2015 record (an amazing 53-3) and her 21 Grand Slam winner record. This win is about women of color everywhere — and she's a champion for all of us.

The best part of Serena — and the part that was probably the most terrifying to my tween self — is that she is completely, wholly, 100 percent unapologetic. I have never seen her waver, even in moments of cruel racism, enormous physical pain, or devastating loss. I have never seen her break under the hateful words of hateful people. Instead of rolling over and giving in to the role that the media wants her to play — the powerful, outspoken woman who is a bitch — she doesn't hide a single thing about herself, on or off the court.

Yeah, Serena might rub people the wrong way from time to time. But after going through adolescence and living in the adult world as a minority, I've found myself in countless situations where I have to stand up for myself in ways that white people of privilege might find offensive. Because when you're a part of a marginalized community, you can't afford to be proper and behave all the time. The world has taken that luxury away from you.

Earlier this year, Claudia Rankine, renowned poet and playwright, wrote a piece on Serena Williams in The New York Times that focused on her astounding career and what it means for black communities and black excellence. Rankine wrote, "Serena's grace comes because she won't be forced into stillness; she won't accept those racist projections onto her body without speaking back; she won't go gently into the white light of victory." Those are the very reasons I will never be silent again about my support for her. She encourages women everywhere to speak up when the time comes, to remain steady when everything seems to ready crumble.

So how do I feel about her today? Well, there aren't any mixed emotions in me, that's for sure. I would be lying if I said I wasn't still intimidated by her a little bit, but it's not fear anymore. It's a significant recognition and deep reverence for her power.

More like this
What Is Jeanie Buss' Net Worth? The Lakers President Is Uber Rich
By Hugh McIntyre
23 Abortion Funds In States With Trigger Bans To Donate To
By Emma Carey
Here's Your Daily Horoscope For May 16, 2022
By Mecca Woods
When Is The Next Full Moon? Your 2022 Calendar
By Nina Kahn
Get Even More From Bustle — Sign Up For The Newsletter