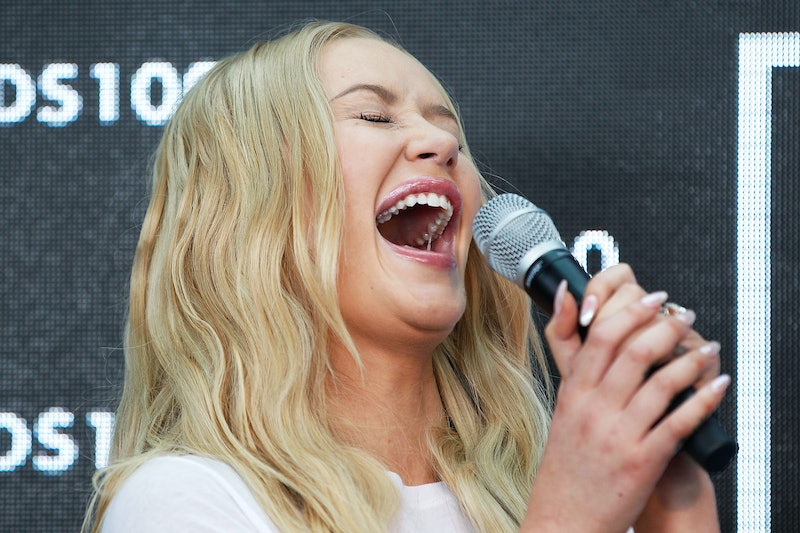 Pink is easily the most popular hair color of 2015, displacing purple as the hue du jour. Rapper Iggy Azalea dyed her hair pink, reminding us that all variations of pink are still in vogue and the shade could veritably extend its reign as a major hair trend of 2016. We've seen our fave supermodel Kendall Jenner try her hand, er, "strand" at pink. Even TV host and mom-of-three Kelly Ripa rocked pink hair. So many lovelies chose to think pink.

Relatively speaking, Azalea has had a semi-quiet 2015, as 2014 was her breakout year, thanks to the success of her smash single "Fancy." She canceled a tour and retreated from social media, only to return to defend herself from the barbs of others. So it hasn't been a banner year for the Aussie starlet. That said, her hot pink hair could represent a fresh, new perspective as 2016 arrives.

Azalea's take on pink hair is not subtle. It's full on — a hot pink shade that covers her whole head. It's not tips. It's not ombre. It's not a few strategically placed strands. She is a true pink lady.

Azalea looks way sexy with her winged liner, major brow arches, and red lips. Normally, this much pink and red above the lips might be a bit too much. But not when it comes to Iggy Azalea.

It almost looks like an Insta filter. But it's not. It's pink hair... don't care, of course. It might be a wig — I can't quite tell, although when examining the roots, it appears that it might be her real locks. Wig or not, it's wonderful.

The rapper is usually a blonde beauty.

But she did rock dip-dyed pink ends in the spring. Her all-over pink is way more impactful, though!

While I have you here, let's do a quick recap of the year in pink hair.

Oh, hey, Jared Leto! Pink hair was not reserved for females, but it was popular at the VMAS. That's where the singer and Oscar-winning actor showed his punky pink follicles.

The always hilarious Rebel Wilson turned up at the VMAs with dip-dyed, hot pink ends. This color job was extra fabulous, since it matched her lipstick.

Nicole Richie was all about that pink hair in 2015.

The style influencer was the patron saint of pink.

Kendall Jenner was pretty in pink... temporarily so.

Her baby sis Kylie Jenner took a hard left at powder pink, with a wig, for a minute. That's because blue is her thing.

Julianne Hough was super in love with her baby pink hair because DUH! It looked amaze on her.

Who doesn't love a pink pixie like Kaley Cuoco's?

Hilary Duff was all about the ombre magenta pink look.

Actress January Jones rocked the lightest hint of pink. It was subtle but also a start.

Singer Ellie Goulding is usually blonde, but she went with a pink stripe and it was everything.

Miranda Lambert played with pretty pink tips this fall. This was probably my favorite pitstop at pink follicles of the year.

So that's a sample of pink hair in 2015, which asserted dominance and coif supremacy. Bring it, 2016. Pink may remain the new black when it comes to strands.

Unless, of course, ombre gray supplants it...