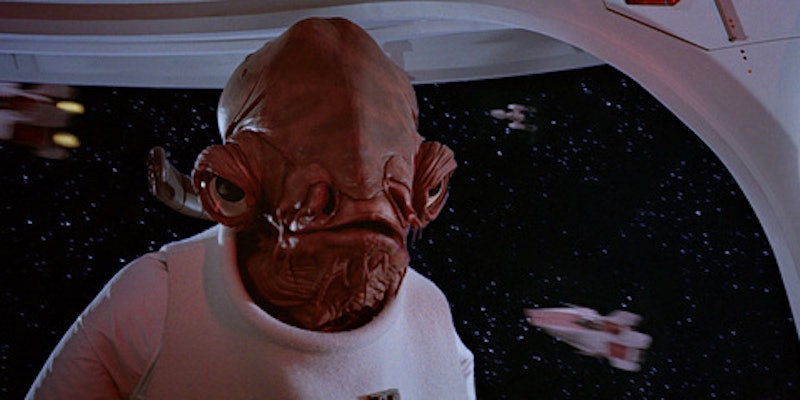 It's expected that Star Wars: Force Awakens is going to bring a lot of your old favs in both small and big ways. That punctuated nostalgia factor is about 75 percent why all of us are running to theaters, lightsabers in hand: we want to be reunited with Han, Leia, and Luke, ASAP. But let's not forget all the other nominal characters along the way: your C-3POs, your Chewbaccas, your Admiral Ackbars. Yeah, in case you're wondering if Admiral Ackbar is in Star Wars: Force Awakens. I mean, really, you have to wonder: what's the fish-headed alien been up to this entire time? A baby's whisper of spoilers ahead, for those of you who have a gentle stomach and want to go into the film fresh-eyed.

Well, before I expose all, let's go into the "why" aspect of, "Why do we care, exactly?" Admiral Ackbar doesn't show up until Return of the Jedi, the last film of the original trilogy. He's a high ranking member of the Rebellion Alliance in spite of his hideous visage, and he attempts to lead the Rebel forces into a sneak attack on the Empire and, subsequently, the second Death Star. But surprise! It's a trap, as the Empire was expecting the Rebels this entire time. And, thus, this is where Ackbar's big line, "It's a trap!" comes from.

And there are many fantastic lines in the Star Wars franchise. There's "these are not the droids you are looking for" in A New Hope. "I got a bad feeling about this" (and all it's variants) across each film. The very potent exchange of "I love you" and "I know" towards the end of Empire Strike Back. There is no dearth of memorable quips. But, sometime around 2011, "It's a trap," became a meme, prevalent in such a big way that Family Guy co-opted it for its spoof episode on Return of the Jedi. So, upon hearing that Admiral Ackbar is going to make a triumphant return, you have to wonder if he's going to spout out any other gems this time around.

The verdict on that? No. Womp womp. In fact, Ackbar isn't even really referred to by name, though that Mon Calamari face of his is unmistakable. Things are going more-or-less well for him, though. He's a commander in the Resistance alongside General Leia, and he's belting out orders like an admiral would. As far as we know, he manages to make it through the movie relatively unscathed, but only time (and a sequel) will tell if we'll get a legitimate "It's a trap!" reprise.

Ah, well. Regardless, I'm sure that checking out Force Awakens will be a worthwhile endeavor, even without your favorite line.