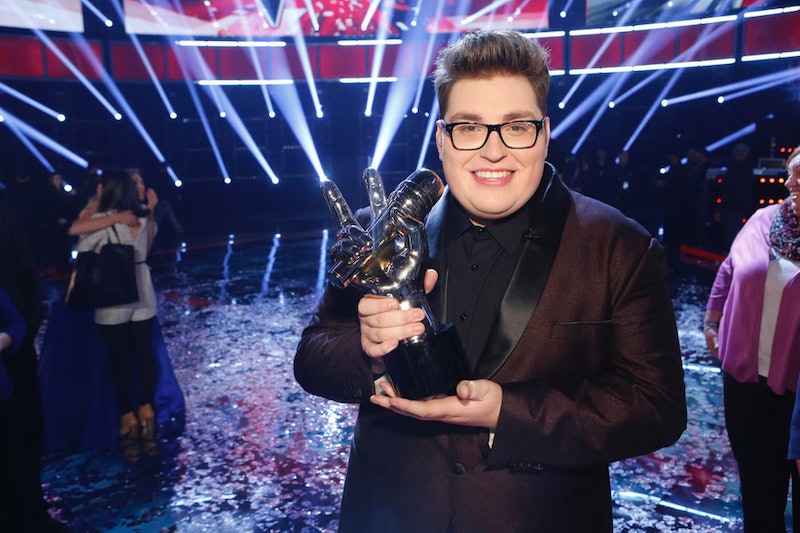 From the very beginning of this season, Jordan Smith embodied The Voice . His Blind Audition for the judges was mimicked for America when even viewers at home didn't know who was belting out Sia's "Chandelier." He was an instant favorite, and his success culminated on Dec. 15 when Jordan Smith was named the winner of The Voice , and awarded a recording contract, meaning fans will be getting a Jordan Smith album soon. The 22-year-old from Kentucky has gone leaps and bounds from leading his church's choir, but he has remained incredibly humble throughout the process. "I think back to a year ago when I was still in school, taking exams, working two jobs... Now, I'm here and I open my phone and see my name above people like Adele and Justin Bieber on iTunes," Smith tells Bustle in an interview, "It's completely surreal and a huge honor."

The Voice, a fan-driven show, crowned Smith the winner on Tuesday after a season of consistent chart-topping songs on iTunes. His rendition of Queen's "Somebody to Love" knocked Adele's "Hello" from number one to number two. "As an artist, one of the most special things is that people want to be a part of something that you're doing," he says. "To know that people are laying their money down, especially when everything is so economically stressed right now... I'm very humbled by that."

His experiences on the show "are hard to rank," he says, but one of his favorite moments was meeting Dolly Parton. "[She's] someone I've looked up to for a very long time," Smith admits. "I actually owned a "Best Of" CD of hers and listened to it in my car every morning and every afternoon my entire senior year of high school until it literally stopped working."

Of course, another famous artist that Smith grew close with during his time on the show was his coach, Maroon 5's Adam Levine. "From the first rehearsal, I quickly saw how well he understood what I wanted to do," Smith says. The Team Adam champ says that the two were able to find a balance that made it easy for Adam's "fiery, go-getter" personality and Smith's "buckle-down" personality to work together. "He did everything that he could to push me and challenge me as an artist," Smith says of his coach.

Now, Smith has the exciting journey of working on the recording contract he won on the show's finale. "I'm going to get back to L.A. as soon as possible in January and start working on music for the future," he says. "I'm really looking forward to getting my original music out there and showing everyone what I'm about and what an original sound of mine is going to be like."

But first, the holidays. Even before that? Sleep. "I'm looking forward to getting lots of sleep," the singer says, planning on traveling home to Kentucky to spend the holidays with his family and girlfriend. There's also one normal person thing Smith can't wait to do. "I'm excited to drive again!" he says, joking that he'll get to put his Dolly Parton CD "on repeat," like he did in high school. Only now, he actually knows her.

More like this
Kourtney & Travis Crashed His Daughter’s TikTok Live In Their 2nd Wedding Outfits
By Grace Wehniainen
Twitter Is Upset About The 'American Idol' Top 3 Results: "Who TF Is Voting?"
By Jake Viswanath
How 2 'American Idol' Singers Performed With COVID-19 & Made It Into The Top 5
By Jake Viswanath
Pete Davidson Mentioned Kanye West & Ariana Grande In His Last 'SNL' Sketch
By Grace Wehniainen
Get Even More From Bustle — Sign Up For The Newsletter