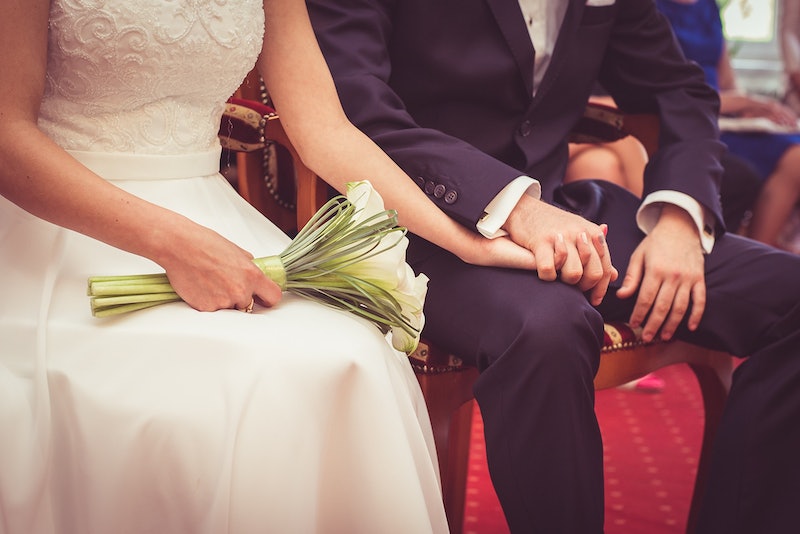 As much as it may seem like a depressing thought when you’re in the midst of being in love, considering a prenup before you get married isn’t exactly a bad idea. Honestly, you never know what’s going to happen in the future, so it's best to cover your ass — and your assets. You do not want to end up watching half your savings, checking, and retirement accounts go to someone who either wronged you or with whom you fell out of the love. I mean, talk about some rage-inducing madness.

According to research on relationships from online legal services, Avvo, with the holidays come a lot of engagements. Since popping the big question this time of year is a fairly common occurrence, right after you excitedly say, “I do!” you might want to get your head out of the clouds and think rationally. Yes, you need to start thinking about whether or not a prenup is going to work for you and your partner, and hope that your partner is game. And while the 50 percent divorce rate isn’t exactly accurate (yes, it’s less), divorces still happen. They can even happen to the happiest of couples.

According to Avvo’s research, here’s how Americans feel about prenups.

1. A Third Of Americans Believe In Prenups

While this isn’t the majority, it’s definitely something. Avvo’s research found that 34 percent of both divorced and single people firmly believe that prenup agreements are totally the way to go. Even if neither partner is rolling in the dough more than the other, you never know who’s going to get a crazy promotion or have a long lost relative die and leave behind $10 million dollars. Basically, you just want to play it safe.

2. Almost A Quarter Of Unmarried People Are All For Prenups

According to the findings, 24 percent of people who are in relationships, but not married think that a prenup is necessary. Apparently, these are the people who believe in love, but also believe in being rational, too.

3. Only A Small Percentage Of Married People Think Prenups Are Important

Of those surveyed, only 17 percent of married people think a prenup is a necessary component to all that pre-marriage stuff. However, I’d like to point out that if you’re already married and you change your mind, there is something called a post-nup. You know, just in case things are starting to feel a little, well, less than perfect.

4. A Quarter Of Those Who Have Never Been Married Believe In Prenups

Although 24 percent of those who are unmarried but in relationships believe in prenups, slightly more singles who have never married, at 25 percent, believe that if they do get married, they’ll probably be signing up for one. Good idea, you guys!

Well, considering the gender pay gap with which we’re still dealing, I can’t say I’m totally surprised by this, but yes, more men than women think prenups are a good idea. Although it’s only a 10 percent difference with men at 55 percent and women at 45 percent, it still puts men in the majority when it comes to the whole prenup thing.

More like this
The Most Compatible Life Path Numbers, According To Numerologists
By Kristine Fellizar
Help! My Partner Only Wants Sex Late At Night & Won’t Compromise
By Sophia Benoit
The 3 Most Compatible Matches For Life Path 1s
By Kristine Fellizar
Ask A Sex Therapist: Is My Sex Fantasy Normal?
By Madison Malone Kircher
Get Even More From Bustle — Sign Up For The Newsletter