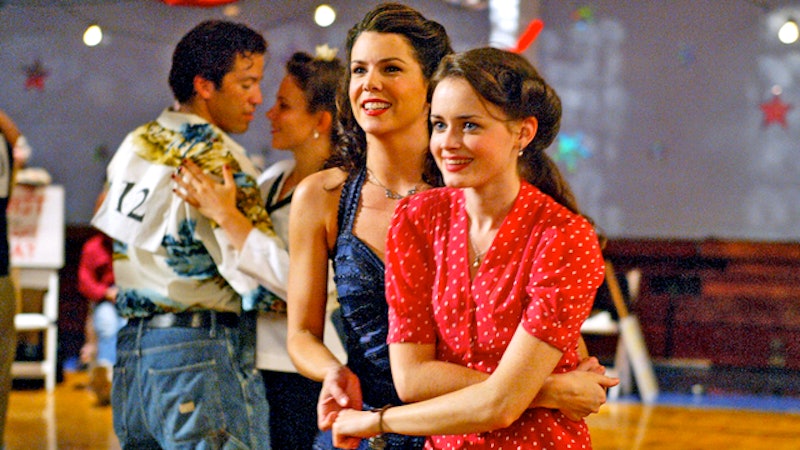 The Gilmores knew how to throw a party. Season after season on Gilmore Girls, Lorelai, Rory, and their friends would have these awesome, creative parties. Even charity events put on by their town were awesome (I mean, I don't know where you grew up, but we certainly didn't have '40s themed dance marathons in my hometown). Lorelai and Rory were extraordinarily cool though, so, it was fitting that they would have had equally cool parties. That saaaaaid, there was one type of party the Gilmores didn't conquer: the dreaded New Year's Eve party.

It's a real shame they never got it together because it probably would've been amazing. Despite the lack of an NYE themed episode, that doesn't mean that you can't turn to the Gilmores for a little inspiration for your own New Year's bash. Whether you're planning on a quiet evening with some friends or a blow out with everyone you know, Lorelai and Rory can guide you.

Lorelai was the queen of turning a mundane evening into a legendary soiree. Whether it was an awkward night with a new boyfriend or boring birthday party — Lorelai could fix it. So, here's how to harness your inner Gilmore and ring in 2016 with a bang.

In Season 7, Rory's ultra-hip friends Lucy and Olivia throw a 2002-themed bash, complete with Uggs and Ja Rule. This party would be even more fun now (the episode took place in 2007) as 2002 actually seems like a long time ago.

Don't stop dancing until it's 2016! In the show, the dance marathon is '40s themed, which could be a fun added twist. A dance marathon would be a low-budget way to have a great shindig, and, hey, it's built in entertainment!

Rory's Sweet 16 Party took place during the show's first season and it was absolutely adorable. There were pink boas, crowns and cakes with faces on them. Since we're celebrating the beginning of 2016, what better way to welcome the year?

4. A Life And Death Brigade Party

This one is a little extreme, but, go big or go home right? This would be a black tie event (ball gowns and tuxedos only, please). While, I definitely don't recommend jumping off any high ledges, the umbrellas could be a cute accessory.

In Season 4, Luke's sister has a Renaissance-themed wedding. After all, a renaissance is a revival or a rebirth, so it's kind of the perfect theme for a New Year's party.

When Rory's beau Logan moves to England, she throws him a smashing party fit for the queen herself. Throw on The Clash, get some Pimm's and have a blast!

Gilmore Girls loved pop culture and no where was that love as evident as at the Tarantino-themed party Rory attended during Season 5. With The Hateful Eight coming out, this is still perfect.

This would be a high-budget option, but in Season 3, Stars Hollow throws an end of summer carnival complete with a barber shop quartet. Break out the funnel cakes and cotton candy!

In Season 7, Rory is bummed when she can't go to Asia with Logan, so Lorelai brings Asia to them. Sounds like a great excuse for dim sum.

The series ends with a bon voyage party for Rory. The beach themed bash got rained out on the show, but it would be a great way to say goodbye to 2015.