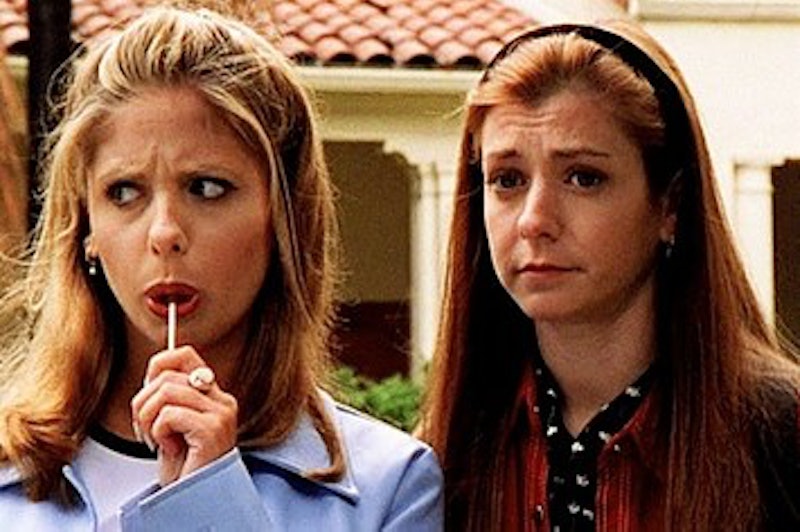 I went through a lot of awkward stages in the 90s. Actually, the decade pretty much covered all of my adolescent and teen years, so if I’m honest, these “stages” might be more accurately described as once long, continuous decade of embarrassed gawkiness. Of course, adolescent discomfort isn’t limited to any particular time period. The awkwardness of growing up is universal, and seeing photos of my parents at age 13, all ungainly limbs and horn-rimmed glasses (long before they were hipster-chic), has me convinced that 13 has been awkward since 13 was invented — that the first time a caveman turned 13, he looked around at the angsty cave paintings decorating his walls and thought, “I dunno, guys, I feel super awkward.”

Although the 90s can hardly be blamed for my teenaged inability to act like a normal human around strangers, romantic interests, or anyone I regarded as “cool,” there were certain awkward life stages that my peers and I went through that can only be blamed on the decade that invented Crystal Pepsi, frosted tips, and the Internet. These uniquely 90s experiences only seem more ridiculous in from a 2015 perspective. If they seem familiar to you, just give yourself a pat on the back for making it through.

1. Trying to make body glitter work in every day situations before ultimately realizing that you could not pull it off.

It always looked so cool when pop stars wore it. Why didn’t it seem to have the same effect in 7th grade gym?

2. Dealing with dial up when you only had one phone line in the house.

For some reason, convincing your mom that you needed to tie up the phone line so that you could use the Internet for school (when really you were using it for AIM) never seemed to work.

3. Figuring out what to do when your Hypercolor t-shirt stopped… hypercoloring.

Eventually Hypercolor t-shirts, which were incredibly popular for about one year, would just give out and turn a sort of muddy color. And what were you supposed to do then? What is a Hypercolor shirt without the hypercolor?

4. Trying out AOL chat rooms and then realizing that the 15 year-old-boys sending you messages were all, in fact, middle-aged men.

5. Telling yourself that you weren’t into labels but also desperately wanting a CK1 crop top during the CK1 crop top craze.

You also experienced this stage with Doc Martens and pretty much every trendy brand of the decade.

6. Scoffing at Celine Dion to your friends, but secretly believing that “It’s All Coming Back To Me Now” is maybe definitely the greatest song of all time.

(Also, please note the BIKER GHOST in this video.)

7. Developing a crush on Dimitri from Anastasia when you were 14 and then feeling weird about it.

Childhood and teenagerdom collided when you saw Anastasia. Suddenly you found yourself having a crush on an animated Russian dude who sounds like John Cusack and you didn't know WHAT to feel. (Or maybe that was just me?)

8. Trying to convince yourself that you looked cool doing the Macarena. You didn’t.

9. Having your knee socks pool around your ankles.

Knee socks and pleated skirts were the height of cool circa 1995, but you were a lot less successful at channeling Cher Horowitz with your carefully coordinated knee socks falling down over your Mary Janes.

Also awkward: Watching the news with your parents and realizing just what the mysterious “stain” on the blue dress was.

11. Insisting that you are not into boy bands and then realizing that you actually know the lyrics to (and secretly love) basically every single the Backstreet Boys put out.

12. Trying and failing at The Rachel.

And then having to wait months for your hair to grow back again.

13. Listening to Jagged Little Pill on a road trip with your parents and then having to explain why there are all those curse words in there.

It seems fairly tame now, but at the age of 12, listening to Alanis yell “Every time I scratch my nails/ Down someone else's back I hope you feel it…” with your parents in tow felt nothing short of scandalous.

In the 90s, we were all obsessed with Bath & Body Works Body Splash. Finding the right scent — the one that perfectly reflected everything about you — was a serious matter: Were you a Freesia? A Cucumber Melon? A Plumeria? We all spent so much time choosing our signature scents that many of us didn’t realize until too late that we were applying the scents with same heavy hands that we might use to water dying plants in a desert. Middle school girls’ locker rooms everywhere reeked of an unholy mixture of Country Apple and Juniper Breeze.

More like this
When Did Tamagotchi Come Out? In The U.S., 25 Years Ago
By Kaitlyn Wylde
Selena Gomez’s ‘SNL’ Hosting Debut Had Twitter Gushing Over ‘Barney’ & Wigs
By Stephanie Topacio Long
David Schwimmer Doesn't Remember This Classic 'Friends' Episode
By Sam Ramsden
The Most Extra Party Girl Beauty Looks From The Early 2000s
By Paris Giles
Get Even More From Bustle — Sign Up For The Newsletter