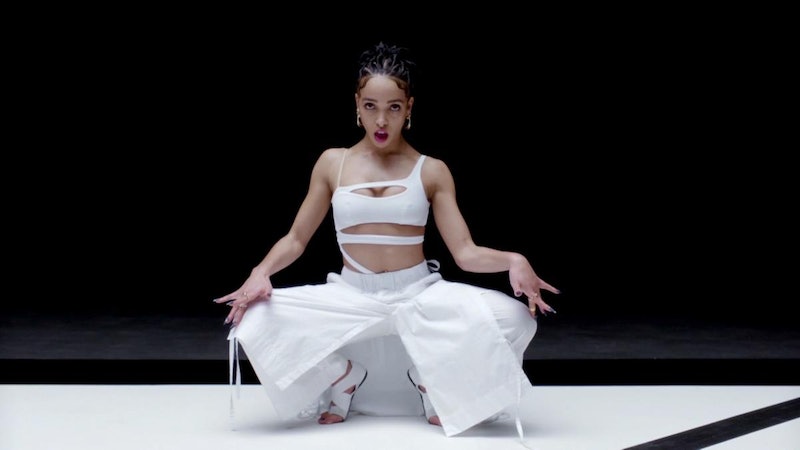 While 2015 might be remembered as the year that Adele returned from her hiatus, the amount of female front women in bands, vocal artists, and solo performers made waves in the musical zeitgeist — on all levels and in all genres, including pop music, hip-hop, indie, electronica, etc. This was a massively successful year for women in music as albums and individual tracks weren't afraid to be emotional and honest, confrontational and raw, or just straight up fun. From sophomore albums like Carly Rae Jepsen's E•MO•TION and Tinashe's Amethyst, to EPs from burgeoning musicians, to albums from seasoned vets, women released some of the best, fully recognized music this year.

As this was the year that everything from women's representation in media to the gender wage gap in Hollywood to female celebrities being asked more than just what they're wearing on the red carpet was finally brought to the forefront of conversation this year, there's never been a better time to give female musicians the spotlight and recognition they deserve. Though they've been speaking up for decades, it seems the world is finally at a place to not only listen, but actually hear what women as artists have to say — professionally, lyrically, or otherwise.

Below is a list of 2015 albums that are each remarkable, artistically focused, or powerful in their own right — and they just so happen to be made by women.

E•MO•TION solidifies Jepsen as a nuanced and realized pop soloist. If you're still trying to get "Call Me Maybe" out out of your head three years later, pick up her sophomore album.

Amethyst is arguably the sophomore breakout of the year. If you thought Tinashe's massively successfully "2-On" of 2014 puts her in the one hit wonder category, listen to any of the songs from this album and uncover something that's simultaneously ageless and new about each one.

4. Kehlani, You Should Be Here

The 20-year-old musician writes lyrics with the kind of gusto and candidness I could never imagine. Her confessional album features 15 tracks that all feel like diary entries — in the best way possible.

The incredibly likable speak-sing style of Courtney Barnett is taken to new heights in her latest album, Sometimes I Sit And Think, And Sometimes I just Sit.

6. Made In Heights, Without My Enemy What Would I Do

The atmospheric beats of Without My Enemy What Would I Do — and Kelsey Bulkin's unique voice — will make you wonder why Made in Heights isn't massively known. I can't think of a song that delighted and surprised me more than "Murakami" this year.

The breakup album that confronts pain and vulnerability — but still manages to be full of the artist's quintessential oddities — proves nothing if not Bjork's immense staying power as a musician.

As an artist that defies genre boundaries, FKA Twigs's can't be put into a box, and neither can her latest EP, M3LL155X. The vocals and beats are messy, but contained; methodical, but authentic, and prove once again that Twigs is the queen of a genre that doesn't quite exist yet.

Art Angels feels more singular in vision than Grimes's previous albums, even though the individual songs are more varied. (Pro tip: "Flesh Without Blood" is the daring pop song you need to stop everything you're doing and listen to right now.)

Adele's 25 has been almost unanimously regarded as a masterful third album from the otherwise highly revered soul singer. Its powerfulness has been discussed ad nauseam, but if there's one thing you should know about 25 , it's that the album doesn't just live up to its hype — it moves beyond it.

Listen up everyone. 2015 was the year women dominated music.