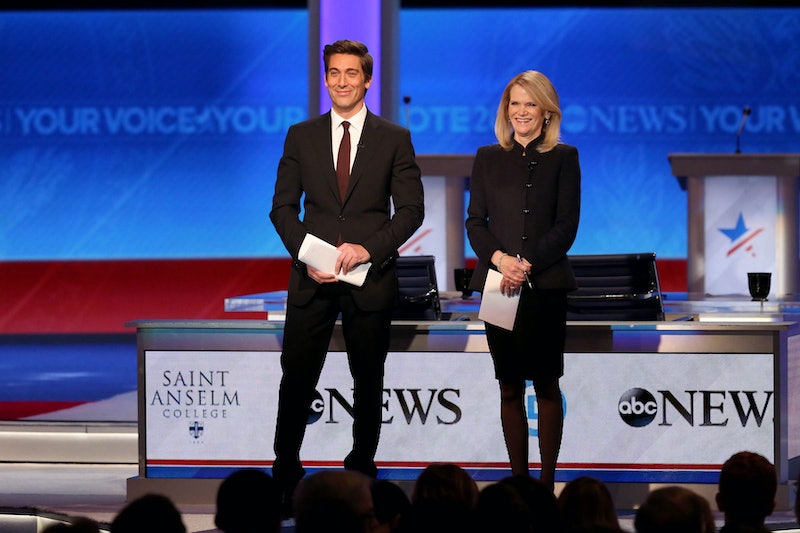 For the first time this year, ABC hosted a debate along with local station affiliate WMUR. The third Democratic debate took place on Saturday at St. Anselm College in Manchester, New Hampshire. Josh McElveen served as WMUR's moderator, while David Muir and Martha Raddatz represented ABC. Though Muir and McElveen were incredibly impressive in their performance, neither moderator received as much love as ABC News' chief global affairs correspondent. Martha Raddatz may have won the Democratic debate based on her highly informed, detail-driven questions alone. Raddatz has extensive experience covering foreign policy as well as national security — two of the biggest issues on the minds of voters and candidates alike.

She detailed the rules of the debate then immediately began asking Bernie Sanders, Hillary Clinton, and Martin O'Malley about gun control. Her handling of a visibly frustrated O'Malley was both diplomatic and efficient, as was her response to Sanders almost breaking the rules of the debate entirely to answer a question about ISIS that wasn't addressed to him. Being calm and levelheaded in heated exchanges between candidates is certainly a skill that Raddatz excels at. The experienced journalist caught the attention of many prominent colleagues on social media as well as viewers across the country, some of whom even petitioned to have Raddatz mount her own presidential run.

Her most impressive showing hands down was her handling of foreign policy questions. Raddatz stands as perhaps the only moderator so far to directly address Clinton's push for no-fly zones, citing both ISIS and al Qaeda's lack of aircraft. Such well-researched questions from Raddatz allowed the former secretary of state the opportunity to shine herself, as well as show off her own extensive knowledge. Raddatz was just as inspired when asking candidates with less foreign policy experience how they would handle issues abroad, including combative countries and threats of terrorism.

She challenged O'Malley to expand upon his plan of combating ISIS via on the ground intelligence and asked Sanders to further detail his stance against American combat troops. Raddatz was just as relentless on issues outside of her wheelhouse and similarly pressed Sanders about health care, repeatedly requesting a more specific answer as to how the candidate would fund his proposed single-payer system meant to replace Obamacare.

Throughout the debate, Raddatz appeared calm, cool, and collected. Her only low point came in the form of a surprisingly inconsequential question about the role of president spouses. Still, there were those watching who took issue with Raddatz's direct approach, though they were few and far between on Twitter. The extensive praise for the moderator may very well make her a shoe-in for ABC's next debate, to take place Feb. 6 at the same venue but with Republicans taking the stage rather than Democrats.