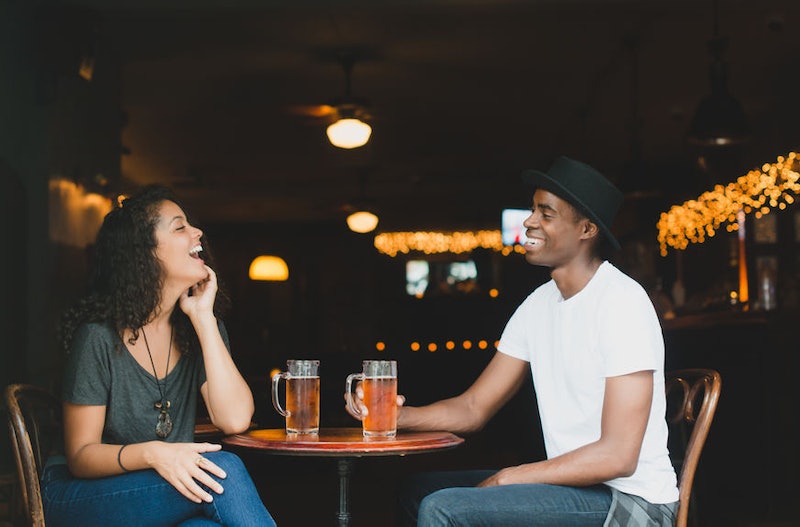 As soon as the clock strikes midnight on Jan. 1, I anticipate new beginnings and fresh starts on everything from work and side projects to fun with friends and family. I’ve long stopped making New Year’s resolutions, preferring instead to focus on the past year's achievements. But this year, I’m trying something new, and will be making a list of dating New Year's resolutions to kick-start my love life into the New Year. It’s about time this part of my life got some attention.

On some level, it feels silly to make a list of dating resolutions. I mean, how hard can it be to go on a date? You meet somebody you like. You hang out with that person. You repeat. But for me, it’s challenging. My fantasies of meeting my future boyfriend at Trader Joe’s or Barnes and Noble remain just that — a fantasy. Sure, sometimes your next partner stumbles into your life with little effort or thought. But most of the time, you have to put in a little work. Or at the very least, be receptive to getting to know someone.

If I already plan on making the effort to further my career, I can also put in a little effort when it comes to dating — and breaking some hard-fast dating rules while we’re at it . Below are six New Year's resolutions us single folks can use in the new year.

1. Be Honest With What You Want Out Of Dating

Too many times, I’ve hidden my own feelings on what I’ve wanted out of a relationship for fear of rejection or embarrassment. Playing it cool, I’ve often agreed with whatever my partner wanted out of the “relationship,” which was most often, “not defining it.” I've since learned that if you want to progress the relationship into significant other status, then you need to say so. And if that person doesn’t agree and starts to ghost, it’s best to move on now — not six months later when you're at your wit's end.

I will say no to dates and potential relationships that I have no interest being in, whether it's because of a gut feeling, or because I'm simply not interested. Too many times have I ended up going on dates that I didn’t want to go on, because I wanted to be nice, be less superficial, or be more agreeable. Those are all terrible excuses. Saying no can be one of the best feelings in the world.

Sometimes after having a great conversation with a guy I’m interested in, a great date, or a kiss, I’ll start having fantasies of what the future could be with the two of us: getting more serious together, meeting the parents, moving in together... the list goes on. And while I know these thoughts are normal, what’s not great is getting so hooked on these fantasies that I start to lose interest when the guy does something that lets me know he's human.

4. Stop With The Superficiality

Look, it’s great to have standards, but relying on superficial ones based on looks or profession is only going to leave you disappointed, and the chance of missing out on some great people who don’t fit into any of those boxes is high.

You know where I’m not going to meet people? On my couch watching another episode of Real Housewives of Beverly Hills. Meeting new people doesn’t mean I have to go out to the hottest club in the city — it just means I have to put myself out there in the public a little bit more, instead of cozying up next to my space heater.

I'll be the first to admit that these days, texting is king. But too often, we miscommunicate over texts, often taking messages out of context and misconstruing them. I've realized that I am too old to decipher the meaning of ambiguous texts, punctuation marks, and hours-long silence. Instead, and this goes for everything (including friendships), I’ve decided to dial numbers and have an actual conversation. It’s what our grandparents did, and it seems to have worked out A-OK for them.

More like this
The “Rules For Dating” TikTok Trend, Explained
By Lexi Inks
9 Alternatives To The 3-Day Texting Rule In Dating
By Ginny Hogan
This TikToker Has Genius Advice For Boosting Your Dating Confidence
By Lexi Inks
15 Flirty "Thinking Of You" Texts That’ll Make Your Crush’s Day
By Lexi Inks
Get Even More From Bustle — Sign Up For The Newsletter