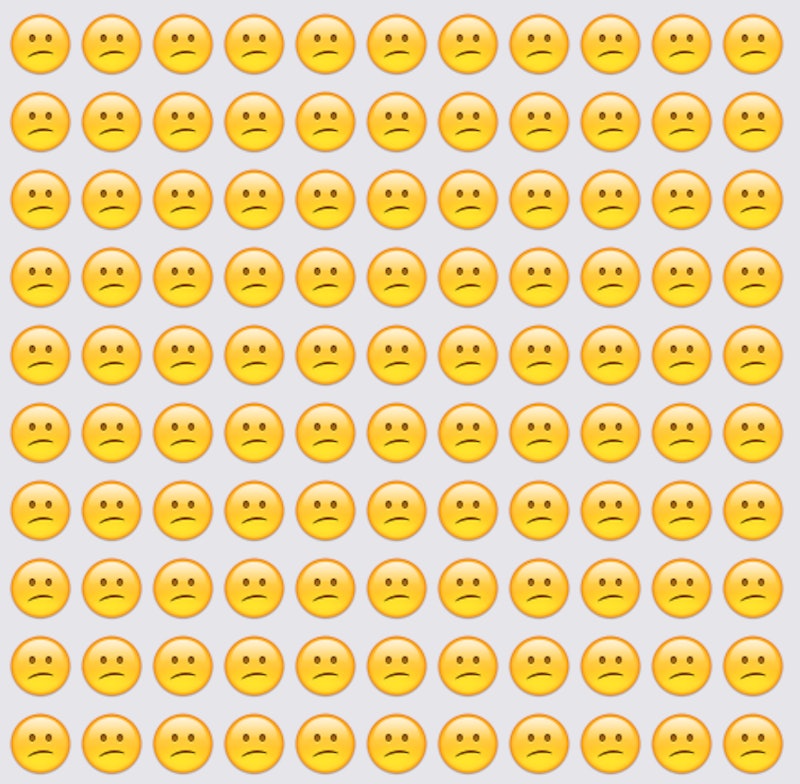 There are a lot of great, sensible uses for emoji; however, there are also a lot of moments where throwing one in with a text message (or just texting one all by itself) is totally appropriate. The etiquette of when and when not to use emoji is growing increasingly important, so here — let's take a look at five times you should not use an emoji. Ever. I mean it.

Being the emoji-supporting logophile that I am, I'd be amiss if I didn't acknowledge all the ways people have used emojis to enhance their messages or communicate more effectively. Take, for example, Domino's use of the pizza emoji to facilitate ordering, which they implemented earlier this year. By just tweeting or texting an emoji to Domino's, the pizza chain will prepare and deliver the default pizza you have saved to your profile — no words needed. Or, on a more serious note, consider the #WeGotYou anti-drug emoji campaign, which uses the small visuals to appeal to younger generations who have basically grown up with the pictograms. Not only do the images stand out and pique interest more than words might have, but they also force you to stop and decode a message, making it more likely to stick in your mind. Not only are Domino's and #WeGotYou using emojis as an effective marketing technique, they're also using them in situations and places where emojis are more than just OK — they are welcome.

However, there do exist moments and situations where it's just not a great idea to replace words with ambiguously defined, tiny, taxi cab yellow people. Here are five examples.

1. To Break Up With Someone

First of all, breaking up with your significant other over text message can be iffy; I'm speaking from personal experience here. But if you're going to do it, try to use actual words instead of emoji. Breakups can be confusing and complicated as is, and using an emoji — each of which can have a slightly different meaning for each individual person in the world — will only complicate things more. When it comes to your SO, save the emoji for happy texts, sexts, and "when you come over could you bring food?" messages.

2. To Express Your Grief Or Condolences For Someone's Loss

When it comes down to it, emoji aren't meant to describe super serious sentiments; they are, after all, silly little characters that look more or less like cartoons. So when someone gives you some heavy news, like a death of a loved one, keep these casual images to yourself and respond with some thoughtful words. Or better yet, a phone call. Or, even better, an in-person visit.

3. To Respond To A Secret

Let's say your best friend is coming out to you over text. She's been scared to do it for a while and has finally mustered up the courage. You're thrilled she shared her secret with you and excited she's beginning to feel comfortable with herself... so you respond with the heart-eyes emoji. But although your heart is in the right place, it's important to consider that your friend might need some words of encouragement, a hug, and to be told that her feelings are valid and deserve more of a response than just an emoji. By all means, include one — but in this case, a few words might be a good idea, too.

4. When Communicating With Your Boss Or Professor

If you have one of those bosses or professors who gives you their phone number in case of emergency, don't take advantage of the situation to be goofy and unprofessional by using emoji. Of course, everyone's relationship with higher-ups is different, and if you and your boss or professor have a casual relationship, perhaps slipping some tasteful emoji into conversation wouldn't be so bad; however, if your relationship doesn't boast a sense of best-friendship, stick to telling your boss that you're going to be late without all the sad faces.

5. If You're Hillary Clinton And You're Sending An Email