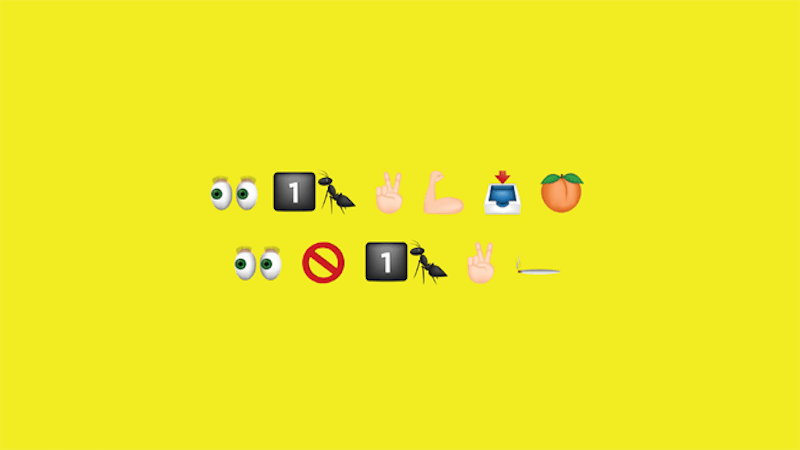 Emoji are everywhere, but the latest public integration of the little pictograms might surprise you: Boston-based agency Hill Holiday just created an emoji anti-drug campaign, #WeGotYou, for the Partnership for Drug Free Kids and the Above the Influence movement. The ads have statements like "I want to fit in, but I don't want to smoke," "It feels like everyone's doing it" and "I don't have to be trashed to have fun" — only they've been translated into sequences of emoji. Emoji have become such a part of our world that they even have their own grammatical rules now, so it makes perfect sense.

#WeGotYou attempts to communicate with young people using various multimedia tools that will speak directly to them, including (of course) emoji. A press release on Drugfree.org describes the campaign, saying:

Teens are driven to a mobile website through digital out-of-home, cinema, mobile, social, pre-roll and print advertising. Individual emoji sentences in each of the ads act as cryptic messages, encouraging teens to “crack the code” via the unique URL featured at the end of each ad.

The most interesting aspect of this campaign is that it isn't telling teens point-blank not to do drugs; instead, it's trying to connect with them and acknowledge the pressures they face while letting them know #WeGotYou if they ever need resources or help. #WeGotYou seems to have evolved beyond the "just say no" school of thought, which I've always thought as being kind of like abstinence-only sex education: It doesn't actually teach teens about the subject at hand; it just tells them not to do it, so when they actually encounter it in the world, they have no information, resources or knowledge about what to do to have a positive experience. #WeGotYou, on the other hand, aims to give teens the information they need to make informed decisions — and most importantly, is there to support them if they want or need it.

Of course, unlike safe, consensual sex, drugs can have detrimental short-term or long-term effects on the body and mind; as such, encouraging drug use still isn't the best way to approach drug education. But like sex, it's safe to assume that teens will try drugs, be tempted to try drugs, or have friends who've tried drugs — which means they need resources to help them understand the effects.

Though it's hard to quantify the effectiveness of an ad on a group of people, it's certainly an attention-catching campaign, especially because images on a billboard are generally more stimulating than words. The next step might be to make the messages a little less confusing because, I don't know about you, but it took me a really long time to figure out what that image was trying to say.

More like this
7 Gun Control Advocates To Follow On Twitter
By Madhuri Sathish-Van Atta
An Honest Review Of The TikTok-Famous WalkingPad
By Kaitlyn Wylde
Instagram Users Are Reporting Issues Scrolling & Logging In
By Courtney Young
What Does “Gatekeeping” Mean On TikTok? The Viral Term, Explained.
By Courtney Young
Get Even More From Bustle — Sign Up For The Newsletter