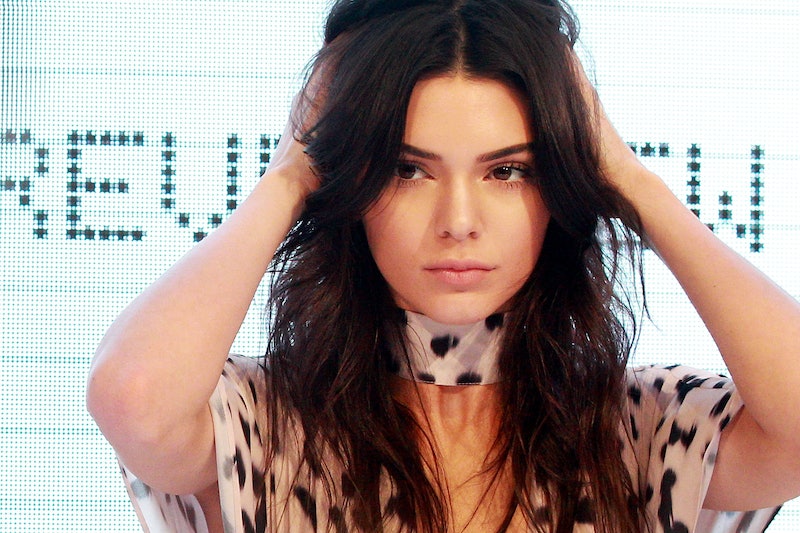 The '90s continued to be fashionable —literally— in 2015. I'm thinking the decade's looks will remain in vogue in 2016. Here's my evidence. Kendall Jenner wore a skinny '90s choker, which was a favored accessory adorning the necks of stylish characters on TV shows such as Blossom, Melrose Place, and Beverly Hills, 90210. Chokers are super versatile and have been modernized, but Jenner's version was such a throwback.

Jenner's super thin black necklace had a cute charm attached. But she's not the only one to don a skinny choker, which she did while pumping some new closet app that you can explore via her caption.

Pretty Little Liars actress Ashley Benson wore a near-identical choker while celebrating her birthday in Las Vegas. Benson was born in December of 1989 so she is almost a '90s kid, while Jenner was born in 1995. Each is certainly influenced by and offers her own modern take on this trend.

For both style stars to wear the same accessory at the same time, but in different ways, signifies that the choker, which has been resurrected by several other celebs in 2015, isn't going anywhere next year.

You can look to both presentations for inspo. Choker inspiration is everywhere, though!

Jenner's charm was big and added a contrast to the thinness off the strap. It's not the first time Jenner has nodded to the '90s, though. She paired her choker with an off-the-shoulder sweater for a dressed down effect.

Benson's charm was smaller and circular. It was a cute little dangle from her neck. She wore a satiny green slip dress with her choker, dressing it up. See! Chokers really do go with anything.

Rihanna is the mother of all trendsetters who wore this trend in the spring. Because duh.

Demi Lovato was all about her skinny black choker and sexy, cleavage-baring pantsuit at the Billboard Women in Music Awards.

The singer and actress, est. 1992, also rocked slim black chokers as part of her recent performance ensembles. There are two more pieces of evidences that skinny chokers are on the rise.

Thick chokers were actually a big deal in 2015. But thin chokers, which are a good, timeless choice, will further assert themselves in 2016.

Let's look back at some memorable 2015 chokers.

Fashion influencer Selena Gomez wore a round, choker-like necklace that sat on her collarbone. It was a modern taken on this trend.

She also wore a white dress with a wide and built-in choker collar.

Jenner also wore a print dress with its own attached and matching choker collar.

Of course Khloe Kardashian did the choker trend. Hers was thick, gold, and collar like.

Ashley Tisdale wore a super skinny choker this fall, indicating that the choker tide was turning.

She crushed the skinny tattoo choker, too.

So, yeah, a variety of wide chokers had their time in the sun (and the in front of paparazzi flashbulbs) in 2015. Expect the resurgent slim chokers to get their due in 2016.