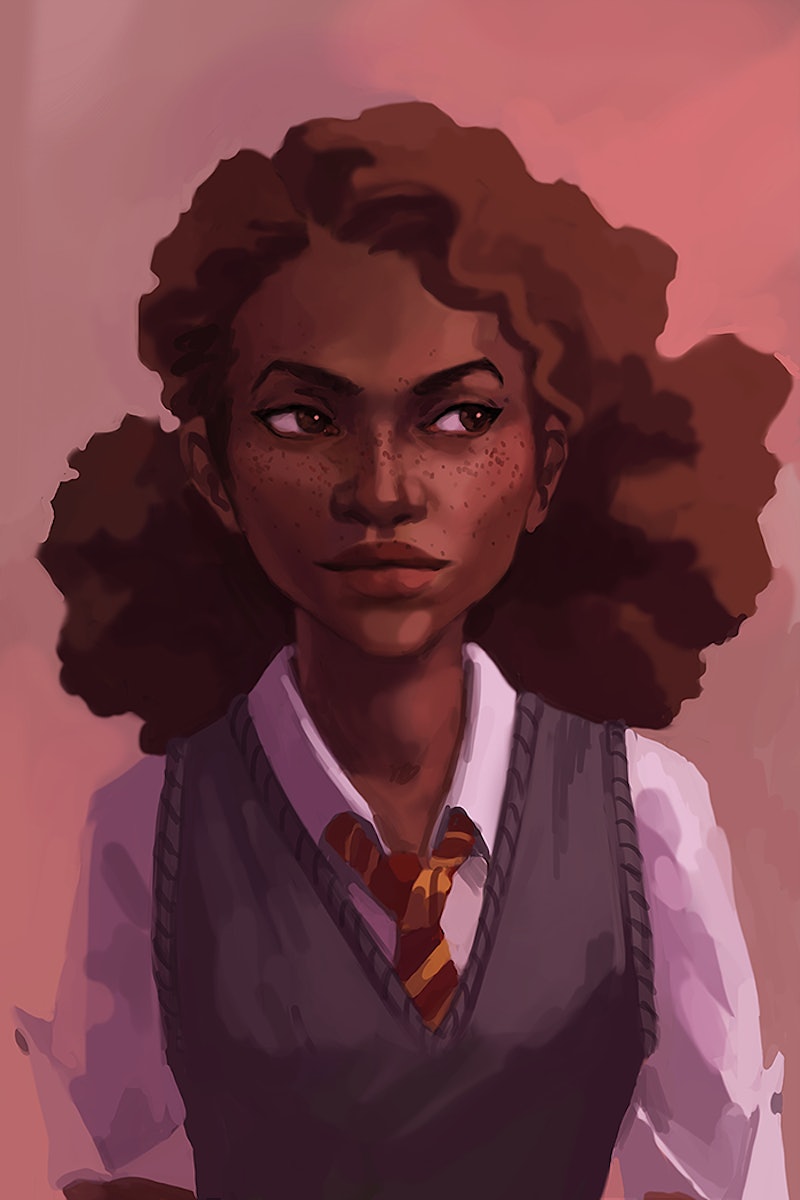 In the past few days the Harry Potter fandom blew up Twitter sharing the news that Noma Dumezweni, a black actor, was cast as Hermione in the upcoming play Harry Potter and the Cursed Child on London's West End. Dumezweni, an English television and theater actor whose work has garnered her an Olivier Award (that's like the British people Tony, FYI), is stepping into the shoes of the world's best-loved nerd, whom we rejoin post-series as wife to Ron Weasley, mother to Hugo and Rose, and ass-kicker in the Department Of Magical Law Enforcement. And while Dumezweni's casting is hugely a cause for celebration, I see the frenzied reactions on the Internet to the casting of a black Hermione and have to ask: Should we really be this surprised?

For those of us who not only were in this fandom as kids, but have stuck in it ("After all this time?" "ALWAYS."), the idea of a black Hermione is hardly surprising to us. Personally, while I was at first delighted to hear of Dumezweni's casting, I was immediately a bit thrown for a loop by the shock of people's reception to it. Had they not seen Alanna Bennett's post "What A Racebent Hermione Really Represents" on BuzzFeed? Had they not seen the gorgeous fan art on Tumblr, that gave us not only a racebent Hermione, but often a racebent James Potter and Harry Potter as well? For those of us who stayed involved in this fandom, watching its fan base shift toward a more inclusive, representative interpretation of the beloved characters has been such an exciting phenomenon that it wasn't until the casting of Dumezweni, and everyone's subsequent reactions to it, that we realized that the rest of the world hasn't been following along.

Here are all the awesome things that have been leading up to Dumezweni's casting, to bring everyone who is surprised by this up to speed:

Fans Have Been Pushing For This For Years

I'm sure it's happening other places too, but this is where most of the geeks are these days (myself included). If you search for Hermione fan art on Tumblr, you'd be hard-pressed to find one that's not of a racebent Hermione.

Long before this casting choice, fans looked at the books and made the obvious parallel between the depiction of Hermione as a "Mudblood" and the history of oppression that black people have faced. The entire seven book series is a Wizarding metaphor for racism, with Muggleborns being depicted as "less worthy" of magic the same way people of color are unfairly prejudiced against. You see the parallels the subtlest and most overt ways — the unconscious prejudice of Professor Slughorn saying Lily Potter was brilliant as a student, "especially for a Muggleborn," the same way unconscious racial bias leaks into our culture today; the taboo and cruel use of the word "Mudblood" echoing the historical non-black use of the N-word; the depiction of Muggles as slaves to pureblood witches and wizards in the Ministry of Magic shortly after Voldemort's takeover.

Hermione became the poster child of the prejudiced against Muggleborn throughout the series, since she was the character in that position we saw most, and also the one that girls of our generation most related with. The metaphor for racism extended to just about every part of Hermione throughout the series — the unfair prejudice she faced, the privileges she was shut out of, the problematic need to have to "prove herself worthy" that manifests in different ways throughout the books — except for the fact that not once in canon was Hermione ever outright depicted as black.

When you look at all of the parallels from this perspective, it makes sense for Hermione to have been a person of color in the first place, seeing as J.K. Rowling is essentially using modern racism as the springboard for all of the conflicts she faces. The depictions from fan artists were an inevitable result of that interpretation.

But on a more general level, it is extremely telling that Hermione is portrayed this way in fan art, the one visual part of a fandom that the actual fans control. Rowling's characters were iconic to this generation of artists, not just because they were so beloved, but because they could see a reflection of themselves in those characters and were given the freedom to interpret them however they wanted. It's no secret that Harry Potter was the rebirth of modern fan fiction back in the early millennium; a much more important ripple of that effect is the fan art we are seeing in the past few years, where fans have taken ownership of these characters in a much more personal, meaningful way. Harry, too, is often portrayed as a person of color in these works, as are other characters outside of the Golden Trio, and many minor characters beyond them.

Although the idea of reimagining racebent casts is not at all a new phenomenon, these icons have started taking a life of their own among fans. Harry Potter is unique in that these reimaginings are constant enough that they have become their own canon to the people following along. You could easily argue that Harry Potter as a work had more influence on our generation than any other works, because these characters were so relatable to us; the eventual reflection of that expressed through fan art that visually represents the whole of its reader base was an inevitable and awesome consequence of that.

J.K. Rowling Herself Said She Left The Character Up For Interpretation

And just in case that wasn't explicit enough, one cannot help but notice the implications of this retweet from John Green that followed up within hours:

Of course, Rowling has received some criticism in the way she has handled underrepresented voices within the canon of Harry Potter. Although she revealed that Albus Dumbledore was gay, she infamously waited until after the series was completed to reveal this to fans; as welcome as the news was, some people were upset that she waited until the series was over, when it had less of an impact on the young readers who might have taken solace from it or shifted conditioned perspectives about LGBTQ people as a result. Some are accusing her of backtracking on the topic of Hermione's race the same way she seemed to "backtrack" on Dumbledore's sexuality.

That being said, Rowling has long acknowledged that, a long time ago, these characters left her hands and started belonging to the fandom. The cultural acceptance of a black Hermione may be long overdue, but it has emphasized that, above all, this fandom has enough influence to make these characters whoever they want them to be. Rowling retweeted evidence of the impact of that yesterday, with people all over the globe reinterpreting the character of Harry Potter as a response to Dumezweni's casting. Which brings me to my last point ...

This Character Belongs To Everybody, Not Just The First Idea Of Her That Stuck

Hermione doesn't belong to the one widespread interpretation as "white". Hermione doesn't belong to Emma Watson's portrayal of her, or even the mental image that you may have first had of her when you read the series. Hermione belongs to the entire fandom — to every kid who saw a piece of themselves in that nerdiness, in that passion, in that "other"-ness that she represented. When you look at the scope of just how many people relate to this character and draw strength from her, alternate depictions of Hermione making their way into the mainstream are long overdue. The people who are opposed to a black Hermione and call themselves fans of the series have ultimately missed the entire point of the series, and everything that its characters fought for — a world where regardless of your origins, everyone belongs.