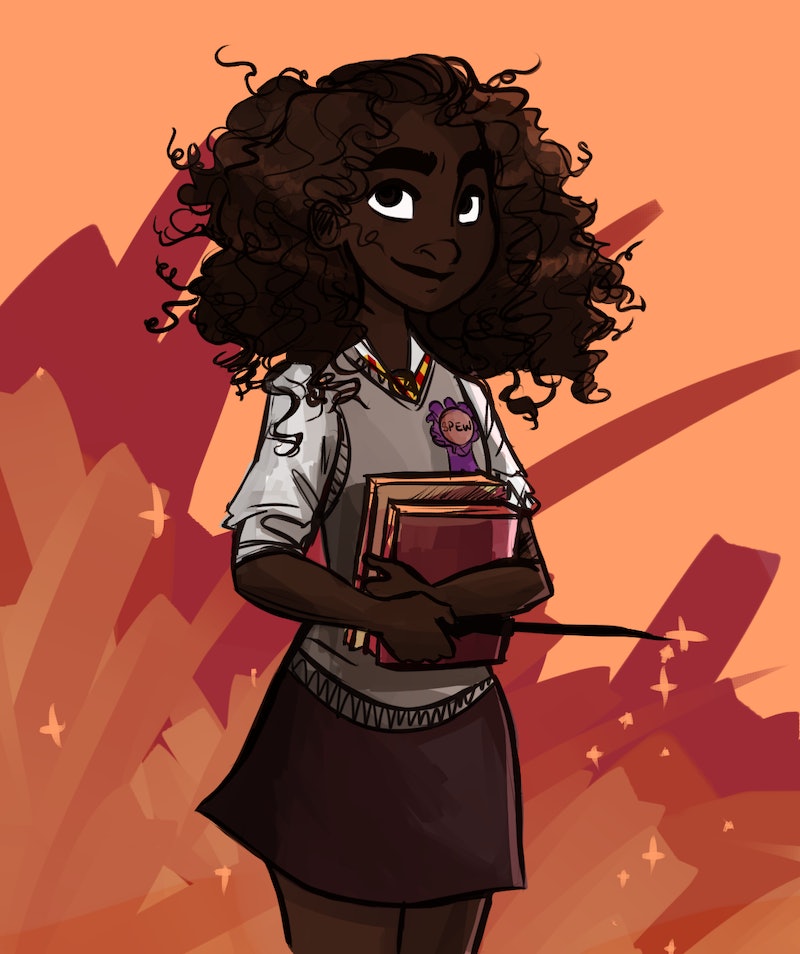 On Monday, fans got their first look at who would play the Golden Trio in the much-anticipated summer stage play, Harry Potter and the Cursed Child , which premieres on July 30th. Jamie Parker, Noma Dumezweni, and Paul Thornley will portray modern-day versions of Harry, Hermione, and Ron, respectively, and each actor brings bountiful talent and recognition to the wizarding world. Hooray for the casting of a talented black actor as Hermione!

Although the announcement was met with overwhelming support from the fandom, a vocal minority could not fathom the choice to cast Dumezweni as the brightest witch of her age. Some so-called fans were not at all happy to see a black actor cast in the role of Hermione. Some even went so far as to liken the decision to the casting of a white actor in the role of Nelson Mandela.

The racist backlash against Hermione's new actor bears striking resemblance to the outcry over the choice to cast a black actor to play Rue in The Hunger Games movie. Never mind the fact that author Suzanne Collins described the character as having "dark brown skin and eyes" — readers took to Twitter demanding to know why the utterly fabulous Amandla Stenberg had been chosen to portray Katniss' friend.

More recently, a Deadline exclusive named Idris Elba the frontrunner to play Roland Deschain in the long-awaited film adaptation of Stephen King's Dark Tower series. The news received a racist backlash from the edges of the reading audience, similar to that which followed the announcement that Elba would take up the James Bond mantle from Daniel Craig. King, for his part, pointed out that the race of his titular Gunslinger means nothing, stopping short of mentioning that those who virulently opposed the actor's casting had forgotten the faces of their fathers.

All that aside, it's beyond time for us to recognize Hermione as the black woman she so obviously is. I've got six magical reasons why.

1. There's No Indication that Hermione Is White

There are two mentions of Hermione's skin color in J.K. Rowling's books, both in Harry Potter and the Prisoner of Azkaban. First:

They were there, both of them, sitting outside Florean Fortescue’s Ice Cream Parlor — Ron looking incredibly freckly, Hermione very brown, both waving frantically at him.

And later, when Harry and Hermione use her time-turner to save Buckbeak:

Hermione's white face was sticking out from behind a tree.

As many have pointed out, the first scene takes place just after the children have returned from their summer holidays, which Hermione spent in France. Now, I'm a white woman who, despite being chronically pasty, can get a nice, deep tan if she tries. I've known plenty of white women who frequent tanning beds to get the same effect. However, at no point in time would I describe any of us as "very brown." Tan, yes. Very tan, even. But very brown? Nah, bro. In my book, that requires a little extra melanin in your tank to begin with.

But what about that other quote? Although Rowling uses descriptors quite a lot, she generally doesn't go around describing people's skin colors, especially when that information has no bearing on the situation at hand. Hermione's face goes "white" when she fears that their rescue effort will be discovered, and so it stands to reason that her face is blanched with fright, and not an indication of her race.

And then there's her thick, poofy hair. Despite the fact that Emma Watson's Hermione somehow magically learned how to control her frizz, book-Hermione never does. So, either Hermione has a bad hair situation that not even magic can fix, or she has fabulous, natural hair. I don't know about you, but I lean toward the latter.

2. Children of Color Can Finally See Themselves As More Than Background Characters in the Harry Potter Movies

Lee Jordan. Cho Chang. Padma and Parvati Patil. Dean Thomas. Kingsley Shacklebolt. Angelina Johnson. Blaise Zambini. Although these characters are compelling, strong, talented, and loyal, they are not well-developed or prominently-featured in the Harry Potter books, and much less so in the movies. In fact, if you cut down all eight Harry Potter films to the speaking time for characters of color, you get an end running time of 5 minutes 40 seconds.

Bringing characters of color to the forefront is just as important as the Bechdel Test, and works in roughly the same way. For those who are unfamiliar, entertainment media that pass the Bechdel Test — so called because it first appeared in an Alison Bechdel comic — will feature two named female characters who speak to each other about something other than a man. In a world where books and films so often present women as the supporting cast of men's lives, media that pass the Bechdel Test place a stamp of importance on women's experiences.

In the same way, non-white characters are often relegated to the chorus of allies or evil minions. This leaves children of color without the opportunity to see themselves reflected in their heroes. Go ahead and like Harry Potter, the whitewashed world says, but you'll always be an Angelina Johnson, never a Hermione. This kind of racial stratification, even if it's unintentional, just isn't fair to anyone.

A lot of Hermione's Twitter opposition wants to know why, if the character might have been black all along, she is presented as white on the Harry Potter book covers. Why do all the illustrations show a black Hermione? Why? Why? Why?

As it turns out, there's a serious whitewashing problem in YA literature. Books featuring non-white protagonists often have white models or illustrations on their covers, presumably because black, Asian, and latinx faces aren't as marketable. It's ridiculous. It's racist. It needs to effing stop.

Supposing we ever get another set of Harry Potter books with new covers, Hermione should be represented as a young Dumezweni. Period.

The video above is a documentary called Dark Girls. If you skip ahead to the 12:50 mark, you'll see the most depressing clip I have ever watched. A little black girl is given a card with a group of five cartoon girls, identical except for their color, and asked to point out which child is "smart," "dumb," "ugly," and "good-looking," and why. She indicates the lightest-colored girl as smart and good-looking, and the darkest as dumb and ugly, specifically because of race.

I don't know about you, but I really don't want to live in a world where a little girl automatically thinks she is unintelligent and ugly because of the color of her skin. Even if it were the only evidence in the world, this clip proves that girls and young women need strong black heroines, like Hermione, to look up to.

5. Hermione As a Woman of Color Makes Sense

In the BuzzFeed Community article that converted me to Team Black Hermione, Alanna Bennett talks about "What a 'Racebent' Hermione Granger Really Represents." Hermione's experiences as a Muggle-born in the wizarding world translated to Bennett's own experiences as a black girl in the U.S. Still, Bennett didn't see Hermione as black:

The idea of a black Hermoine has existed within the fanon for a while, but that was still a long time in coming. When she found illustrations of the character as a young woman of color, Bennett realized that it made sense for Hermione to be black. After all, without our knowledge of racism in the real world, it makes no sense for Draco Malfoy to insult her on the basis of her heritage. Granted, racism doesn't make sense to begin with, but you catch my drift.

It makes sense, then, that Hermione—who was teased for her frizzy hair; teased for being an oddity; teased because of her cultural background and for not being of “pure” blood—could be read as a racial minority.

As a Muggle-born, Hermione's identity was always intersectional. And although there is no part of her character that makes her race essential, being black adds a new depth for us to explore. It's not just good for fans. It's good for Hermione.

6. Emma Watson, Matthew Lewis, and Even J.K. Rowling Are On Board

After the racist side of Twitter spun itself into a frenzy questioning Dumezweni's portrayal of Hermione, the queen herself, J.K. Rowling, weighed in on the situation, coming down strongly in favor of a black Hermione. Matthew Lewis shrugged off the uproar by pointing out that he would not have been selected to play Neville Longbottom if the casting directors had stuck to the books, a sentiment Emma Watson shared with a retweet.

So there you have it. Those are the six big reasons why we've waited too long to see Hermione as a woman of color. Have your own reasons that you want to share? Share them on Twitter with the #teamblackhermione hashtag.