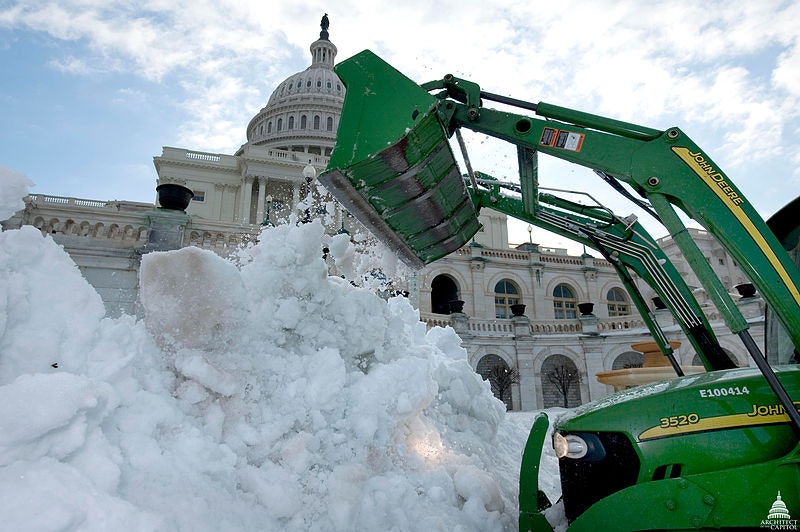 It's baaaaaack...This week, 2014's new BFF the polar vortex will return, gracing us all with freezing temperatures and inches upon inches of snow. OK, so technically it's not actually a polar vortex — as with early January's weather, "this term is being used misleadingly from a meteorological perspective," the Weather Channel reports. But though the polar vortex itself never really moves through the United States, the "flow" around it will shove cold air southward from the Arctic, thereby directly causing all of our fluffy white misery.

If you live in the upper Midwest, Great Lakes region, or the Northeast, you could expect a dose of freezing weather as early as Monday. By Tuesday, the cold air mass will slip down into the Mississippi Valley, the Ohio Valley, the Dakotas, Maryland, and Washington, D.C. The cold is supposed to push further west and south on Thursday, hitting places such as Denver, central Illinois, and Indiana and Tennessee. In summary: Everyone outside of a few select Southern states is pretty screwed. And according to USA Today, these sub-freezing temps could stick around for a week or more.

But let's put things in a little perspective, shall we? Though this January's weather has been no joy ride, historically we've seen much worse winter weather.

In 1888, "the Great Blizzard" dumped 40 to 50 inches of snow in Connecticut, Massachusetts, New Jersey, and New York, completely burying houses and trains. More than 400 people died, which is the worst death toll from a winter storm in United States history.

Man, the late 1800s just weren't a good time for weather, huh? Just a decade or so after the worst blizzard in U.S. history, another massive snowstorm rocked the East Coast. The storm actually started in Florida this time, then made it's way north up the coast. Washington, D.C. was treated to 20 inches of snowfall in a single day, while New Jersey got a whopping 34 inches.

3. The Storm of the Century

Flash forward about 100 years. In 1993, a combo blizzard and cyclone "wreaked havoc from Cuba to Canada." All told, 310 people died. The storm also racked up about $6.6 billion in damages.

In late January 1922, a blizzard swept across the Mid-Atlantic region, dropping massive snow across Maryland, D.C., Virginia, and Pennsylvania. There was so much snow it caused D.C.'s Knickerbocker Theater roof to cave in, killing 98 people and injuring 133.

In 1975, the so-called "Super Bowl Blizzard" started in the West, crossed the Plains, and then continued on a path of destruction across the Midwest. In addition to heavy snows, the storm triggered 45 tornadoes. Ultimately, 70 people and more than 100,000 farm animals were left dead.

In February 2010, snowstorms raged across the U.S. from northern California to North Carolina. The Mid-Atlantic took it the hardest, with record snowfalls in Delaware, Washington D.C., Maryland, New Jersey, New York, Pennsylvania, Virginia, and West Virginia. D.C. was also treated to Thundersnow, which (in my humble opinion) is impossible to say without sounding like a cartoon villain. Seriously, try it.

More like this
13 Summer Solstice Quotes To Celebrate The Longest Day Of The Year
By Sadie Trombetta
The Summer Solstice Spiritual Meaning, Explained
By Jessica Booth and Brittany Beringer
This TikTok Trend Wants You To Be Nicer To Your Inner Child
By Courtney Young
The 15 Best Dresses For Hot Weather
By Andrea Gale Boerem
Get Even More From Bustle — Sign Up For The Newsletter