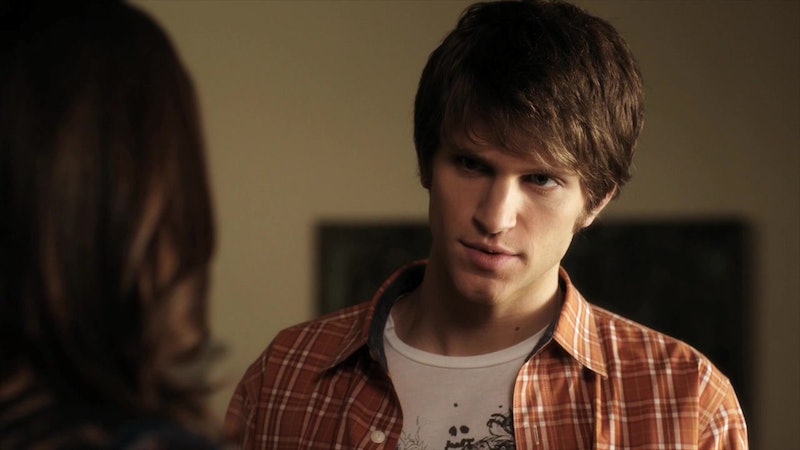 We're mere weeks away from the premiere of Pretty Little Liars Season 6B, and there's one question on everyone's mind: who is the new villain?! There's simply no way that Pretty Little Liars can exist without a Big Bad chasing the girls down and threatening to reveal their secrets, and this time around, the villain isn't playing any games. According to the show's creator I. Marlene King's interview with MTV News, the new Pretty Little Liars villain is way more dangerous than Charlotte DiLaurentis — a.k.a. Cece Drake — ever was. We're talking life or death situations this season, and if the flash forward we saw in the Season 6A finale is any indication, our new Big Bad is a guy. Unfortunately, that fact is bringing on a Hanna-level "bad thought," and that's that Toby might be the Uber A we're looking for. Eep.

I've always been a Toby fan (or, more accurately, a Spoby fan) so even the passing thought that Toby might be A bums me out. Still, I wouldn't be a good Pretty Little Liars theorizer if I didn't acknowledge that there are a few clues that make Toby look a touch suspicious this season. Among them? The fact that Toby recently came into a brand-new house and a whole bunch of cash.

On the Pretty Little Liars "5 Years Forward" special, actor Keegan Allen revealed that Toby has had some major life changes since Spencer and the other Liars left Rosewood. Remember that house that exploded? Well, according to Allen, Toby inherited a whole bunch of money from one of A's more dangerous messages, and decided to use it to build a big house a few miles outside of Rosewood. Because, obviously, that's what carpenter Toby would do.

Why is that kind of shady? Well, here's the thing: A needs a lair. And A also needs a lot of money to stalk and harass the girls. Now that Toby has inherited his fire money, he officially has the means to do so — which means that we may want to keep an eye on our beloved former bae of Spencer.

There's also the fact that, according to King, the new A will be motivated by a death. We learned in the Season 6A finale that Bethany was the one who pushed his mother off of the Radley roof. Could the series be hinting that Toby finally snapped after learning what really happened to his mother? Crazier things have happened — and let's not forget that Toby did don the A hoodie before.

Ultimately I like to think that just because Toby has the ability to become A doesn't make him a likely suspect for the new villain. Still, this is Pretty Little Liars: as we learned last season, anyone and everyone can be a suspect.