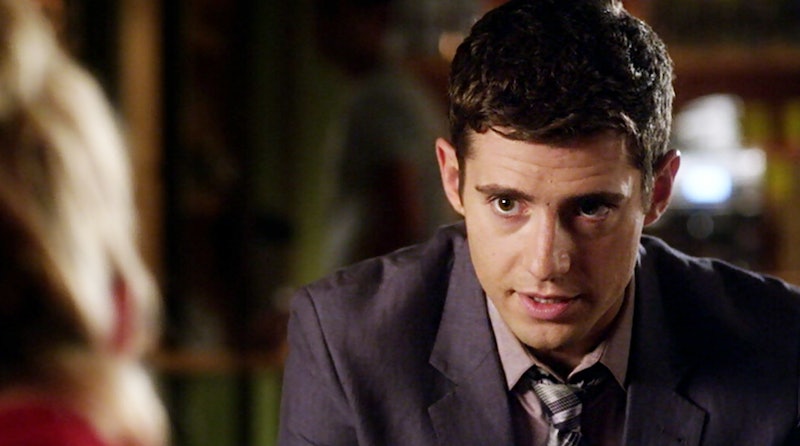 Pretty Little Liars sure made no haste in lining up their next major villain, did they? The dust had barely settled on the whole disappointing (not to mention problematic) CeCe is Big A reveal, when we were treated to a sneak peek of all of the drama to come, via a flash forward to Ali's (I'm sorry, "Mrs. Rollins'") new classroom. The setting seemed mundane enough until all four (fabulously dressed) Liars burst onto the scene and told Ali she had to run because "he" was coming. And, just like that, the Pretty Little Liars Season 6B time jump resurrected the seemingly solved A game.

I. Marlene King gave The Hollywood Reporter a bit of a rundown of the time jump — she made special note of Ali's marriage, as well as Hanna's engagement ring (!!!), and she also pointed out that the Liars have spent the last five years apart. That said, when asked about the new Big Bad, she was as tight-lipped as tight-lipped can be. The showrunner answered, "You have to wait and see!" She did, however, confirm to Entertainment Weekly that the new Big Bad has "some connection to the past," so, let's make of that what we will, and speculate away.

What are you thinking about the show's new villain? It could be a brand new character, sure, but this is PLL we're talking about — even if the A game was officially wrapped up in the aptly-named "Game Over, Charles," I think we can all count on Rosewood's web of secrets to be just as inviolably tangled as ever. Plus, there are just so many suspicious peeps that we didn't get closure on — could one of them be the show's latest, greatest Big Bad? Let's break it down.

It's been two whole weeks since PLL's #BigAReveal, and the majority of us fans are still pretty darn pissed that Wren Kingston isn't, in fact, Big A. When Entertainment Weekly asked King what she made of all of the Wren-based outrage, she demured, "I don’t know, because he’s someone we really haven’t cast suspicion on yet" — which would have been a fine answer if it was, you know, true. Is this a case of a lady doth protesting too much? Is King keeping things vague on the Wren front for a reason? Well, if you take all of the considerable suspicious evidence already mounted against him, together with the new Instagram hint about Spencer's possible stint across the pond (not to mention the fact that Julian Morris has vowed to return to PLL ), signs most definitely point to yes.

We never quite got the closure we deserved with Andrew — just because he turned out to be a major Big A red herring doesn't mean he still wasn't up to some legitimately shady activity. Dude's crazy smart, tech-savvy, and we know he's not averse to creeping and spying — plus, he's got a huge, Liars-shaped chip in his shoulder. So, who knows what shenanigans he might get up to in upcoming episodes?

Let's review: Hanna kissed him (and later satisfyingly beaned him with a tire iron), he may or not have been caught with Ali under the mistletoe in a Santa suit, and his dad lives in a super creepy trailer park in the middle of nowhere? Methinks we haven't seen the last of Holbrook. Plus, we never did find out who Beach Hottie was.

Look, I don't know about you, but I'm still not over the fact that Ezra turned out to be a simple true crime novelist, as opposed to a super villain. I mean, come on, this guy had the prerequisite creepy bad guy lair and he may or may not have attacked Spencer whilst wearing a gas mask. Could his red herring status be in and of itself a red herring? It's food for thought, at the very least.

We know next to nothing about Ali's new husband, aside from the fact that he's a handsome psychologist, but intrepid viewers (like Bustle PLL Expert Lindsay Denninger) picked up on a little fact that makes him mad suspicious. Back in the day, there was a Radley staffer that went by the name of Dr. Rollins — and, if we know anything about PLL, that's no mere coincidence. We'll have to wait until Season 6B to meet him for the first time, but LBR: He's already looking pretty darn sketch.

Who else could be the Big Bad? I know he was specified as "he," but I still think we haven't heard the last of perennial A favorites like Jenna Marshall and Melissa Hastings — could either of them be somehow involved? And what about Lucas? Or Noel Kahn, or Jonny Raymond? Let's face it, Rosewood's positively teeming with eligible Big Bad candidates — so who knows who will take on the villain mantle next. It's anyone's A game now.