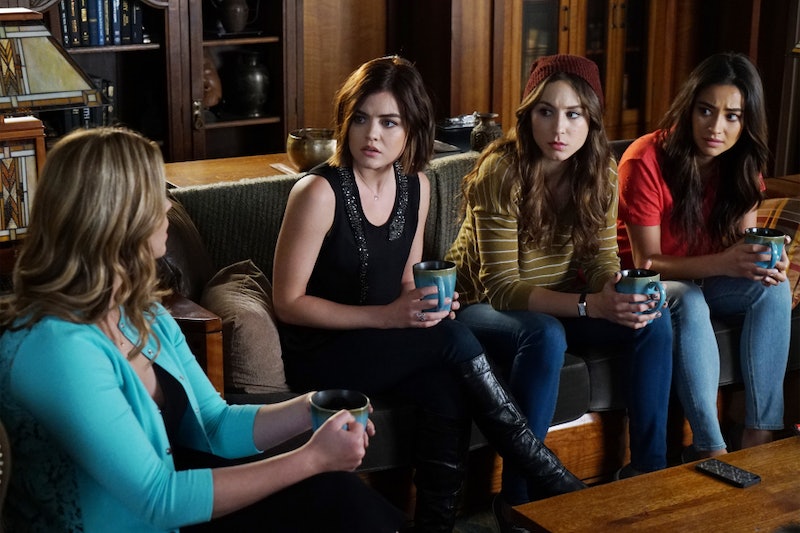 If you've never browsed the Pretty Little Liars subreddit, I recommend you plan a visit soon — it is truly a wonderful place to be. You'll find everything, from quality jabs at Toby, to copious Sara Harvey memes, to theories as detailed and verbose as Anna Karenina. It's definitely a good place to hang out after a traumatizing episode — if nothing else, the spot-on reaction GIFs will make you smile, and if you're really lucky, you might end up accidentally getting sucked into a PLL conspiracy wormhole for several hours! Joking aside, there are some really great Pretty Little Liars theories on Reddit: Think Wren is Charles? Wondering who the heck Black Widow is? Trying to figure out which Liar is the one with the secret twin? Reddit's got you covered on all fronts.

The theories range from slightly deluded to supremely well-thought out, from derivative and predictable to head-scratchingly thought-provoking, from spur-of-the-moment to meticulously researched. Basically, if an idea has ever crossed your mind, it's on there, complete with upvotes, flames, and commenters weighing in with their own opinion. There are also a lot of theories shared on Bustle's Pretty Little Liars podcast.

With all that in mind, here are a few theories from the PLL subreddit that will really make you think.

1. Marion Cavanaugh Is A

Toby's mother has been at the center of a lot of A theories lately (many think she is Bethany and Charles' secret mother and/or Jessica DiLaurentis' secret sister/twin), but ander08's meticulously analytical theory takes things to a whole new level: This devoted Redditor went back and combed through every King-penned episode for proof that Marion is A. Their theory cites as evidence everything from the fact that Marion was an outdoorswoman to that confounding vision Ali had of her mother as the Black Widow, and as a result, their reasoning is strangely compelling.

2. The N.A.T. Club Videos Were For Charles

Now, I think most of us assume that the N.A.T. Club will somehow factor into the PLL endgame, but what if it was in an entirely different way than we expected? SoTaxMuchCPA points out that the N.A.T. Club's voyeuristic videos could have been made for Charles' benefit — as a way to include him in their lives, and give him much-needed access to the outside world. It's a little bit of a stretch, sure, but it's worth ruminating on.

I'd really have trouble reconciling the fact that Hanna's mother is evil, but AuchnotOuch's supremely-detailed theory explains that Black Widow may actually be one of the good guys. The theory covers a lot of ground, and AuchnotOuch makes a ton of good points: He posits that Ashley's relationship with Wilden made her privy to a lot more A intel than she lets on, which led her to go the vigilante route (which would be pretty darn badass). He also points out that Ashley may have invited Ali over to stay not out of compassion, but to "keep tabs on her" (remember how awful that was for Hanna?), and that she might have been one of the masked individuals who helped rescue the girls from the lodge fire. It's complicated food for thought, and it's definitely a cool theory for all of you Mama Marin fans out there.

4. Aria Is Definitely Not A

You know, I love a good ol' "Aria is A" theory more than anyone, but a1000xyes' rebuttal to the popular theory is pure gold. According to them, there are three definitive reasons why Aria can't possibly be A, and here they are in all their glory:

1. You'd hear her jewelry jangling from a mile away.2. There's only so many ways you can accessorize a black hoodie.3. She'd likely try to switch up the wardrobe to something metallic or with cats on it, and would have difficulty blending into the woods while spying.

I don't know about you, but I'm completely convinced.

Most of us hopped off the EzrA train back when he was revealed as a red herring at the end of season four, but pelb makes a pretty good case for the idea that he still may be guilty. After all, writing a true crime novel doesn't exactly merit a super-creepy spy bunker in the woods — plus, did we ever really find out why he was fighting Spencer while wearing a gas mask? There's also his suspicious connection to Mona to contend with, as well as the fact that there are all those Breakfast at Tiffany's references sprinkled in everywhere.

Alison's mainly been flying under the radar lately — she's slipped out of the suspicious zone ever since it turned out that she was framed for Mona's murder. But just because she didn't murder Mona doesn't mean she's not blameless in A's whole web of lies. We still don't know exactly what happened "that night," and you can bet Ali's still keeping a lot of information to herself. Could she have killed Bethany Young, as pelb suggests? It's a stretch, sure, but the fact that Bethany ended up dressed exactly like Alison and buried in her grave on the same night that Alison mysteriously disappeared is nothing if not suspicious.

7. Eddie Lamb Is In The Barrel

We never did find out who was in that barrel, did we? For a while, we thought it might be Jason DiLaurentis or Sara Harvey, but those theories have since been debunked (seeing as they're walking around alive and all). What about Eddie Lamb, though? We haven't seen him since early season five, and as Redditor Iyoushe points out, he definitely knew too much. As they so succinctly put it:

Not looking good for ol' E. Lamb now, is it?

8. Tom Marin Is Being Blackmailed

Now, this theory isn't exactly your garden variety A conspiracy theory, but it still brought a smile to my face. You know how Hanna's dad is basically the worst? Well, Engoble85 posited that there might be a reason why he's so terrible: A might be blackmailing him to "treat Hanna like dirt." I mean, honestly, what's a deep-pocketed man like him doing refusing to pay his daughter's college tuition?

9. Veronica Hastings Is Up To No Good

I've never been particularly suspicious of Spencer's high-flying attorney mother, but BigBootyJoody (best username ever, by the way) makes a pretty good case for Mrs. Hastings' shadiness. As she points out, there's a surprising amount of evidence that hints that Veronica could be the one behind both the murder of Jessica DiLaurentis and the attempted murder of Alison DiLaurentis. After all, there's a ton of hush-hush bad blood and drama between the Hastings and DiLaurentis families, and her motives have never exactly been the clearest.

Plus, it would be just about the coolest twist ever, right?

Now, Ted generally flies under the radar... after all, he hasn't had a ton of screen time, and he's always generally seemed jovial. That said, over his tenure on the show, he has raised a surprising number of red flags. There's the question of how and where he got Ashley's bail (it was no paltry sum, after all), the strange fact that he may have proposed with Melissa's missing engagement ring, and last but not least, as cant_keep_A_secret points out, he went on vacation for precisely the same three months that A went on vacation. Hmm ...

What do you think? Has Reddit won you over?