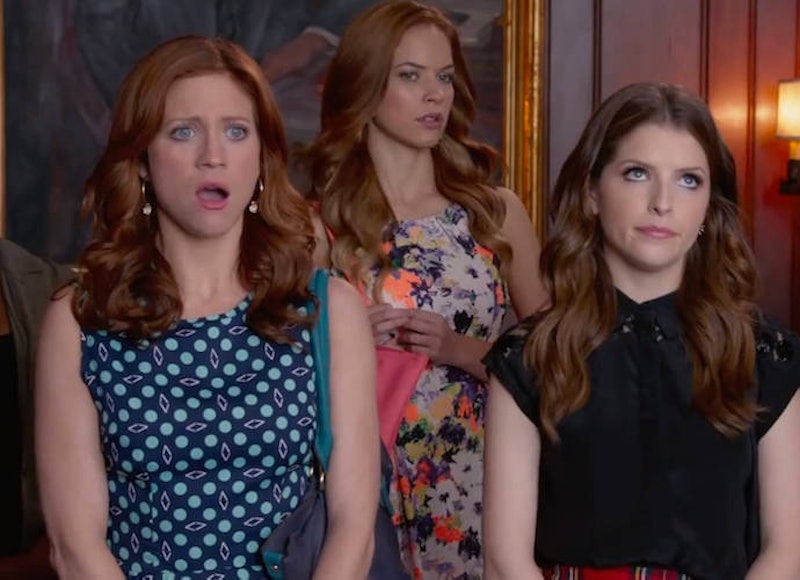 Anna Kendrick is known for being a sass queen in addition to being one of today's hottest young actresses. Over the years, Kendrick has proved that she can do anything. She has starred in musicals (Into the Woods, The Last Five Years), dramas (Cake, End of Watch), comedies (Pitch Pefect), dramedies (Up in the Air), and pretty much every genre in between. She is also one of the rare celebrities who keeps it extremely real on social media — her hilarious tweets are must-read and 100 percent full of sass. Luckily, Kendrick's sassy Twitter profile isn't the only area in which the actress gets to throw a little shade. Kendrick often plays sarcastic characters, appearing in smart comedies and indie dramas that allow her to dish out a lot of fun dialogue. In honor of Kendrick's fierce way with words, both on screen and off, here are 11 Anna Kendrick movies ranked by sassy one liners.

Kendrick has appeared in many films — she has 40 credits on IMDB — and not all of those films feature Kendrick in an exceptionally sassy role. As a result, not all of her films will appear here — just the most sassy of the crop! So, without further a do, please enjoy your dose of Anna Kendrick sass.

"Girlfriends can be nice. You just had a bad one." —Katherine

As young therapist Katherine, Kendrick delivered this line to her patient, Adam. The sass factor is relatively low in the scene, but she gets points for not holding back when it comes to Adam's love life, despite how inappropriate their doctor-patient relationship might be.

"I have cheered the uncheerable, Norman. And I'm not letting you give up now." — Courtney Babcock

As a cheerleader, Courtney's encouraged plenty of losers, so she's not going to let her little brother Norman go down without a fight. Never underestimate the power of a good pep talk.

9. Scott Pilgrim vs. the World

"Next time, we don't date the girl with eleven evil ex-boyfriends." — Stacey Pilgrim

In Scott Pilgrim vs. the World, Kendrick played Stacey Pilgrim, Scott's abrasive sister who had no problem telling it like it is.

8. What To Expect When You're Expecting

YES. Rosie's farewell to the jerk that stood her up on Prom night in high school (conveniently played by hottie Chace Crawford) is what we're all thinking when we run into old high school classmates. The sass is real.

"I don't know, they go into the woods and sacrifice actresses to breed more agents." — Cathy Hiatt

When talking about her agent, aspiring actress Cathy mentions that he's on a retreat. When asked what an agents' retreat looks like, she answers with this incredibly plausible scenario.

After Aubrey chastises Beca for having a "toner" for Jesse, Beca responds in the best way possible. Praise Beca Effin Mitchell.

Another Beca Effin Mitchell classic. How else does one burn a German a capella group?

"If there was sex in it, I would be so excited. It would be my favorite book ever." — Jenny

Kendrick had this epic comeback after being called a bitch in her first major film, Camp. Camp was released in 2003, when Kendrick was just a teenager.

"Oh my god, it's like, the first grade all over again. You're the shinny new toy." — Jessica Stanley

Jessica Stanley was Twilight's most dependable source of sass, as proven with this accurate assessment of the arrival of Bella to Forks.

"Men get such hard-ons from putting their names on things. You guys don't grow up. It's like you need to pee on everything." — Natalie Kenner

Anna Kendrick was nominated for an Oscar for her work as Natalie Keener in Up in the Air (2009), and, based on this line, it's not hard to see why. Kendrick delivered peak sass in the film, delivering this gem of a line to none other than George Clooney. Point. Set. Match.

The sass is clearly strong with Anna Kendrick, and may it never fade away.