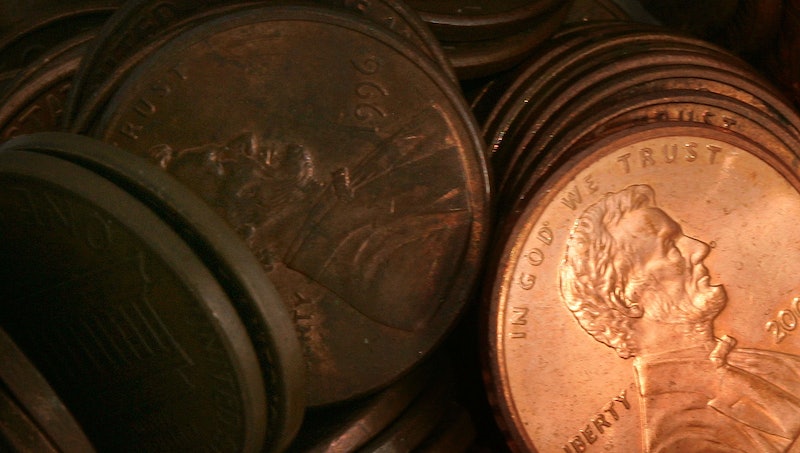 Congratulations ladies! Turns out that the gender wage gap shrunk by one whole cent in 2015. So...hooray? Seriously, I can't think what we'll spend all that money on. Probably some luxury items like tampons.

The National Women's Law Center announced this week that the average woman in the US now makes 79 cents to the average man's dollar, as opposed to 78 cents in 2014. And that in turn was up from 77 cents on the dollar women were making in 2013. So at this rate we'll finally be earning equal pay for equal work in about 21 years, I guess — though, that might be too optimistic.

As with everything, the gender wage gap doesn't impact all women equally. The wage gap is worse in certain states — Wyoming, for instance, won't be closing its wage gap for over a century at its current pace — and the gap is also bigger for women of color than for white women. Black women make only 64 cents for every dollar a white man does, and Latina women make only 54.

So while it seems the rest of the country might be catching up to white men in terms of income, we still have a long, long way to go before achieving economic equality.

Despite the amount of time and energy many expend trying to bend over backwards explaining that the gender wage gap supposedly isn't real, and despite the fact that different methods of calculating it differ as to how big it is, the existence of the gender wage gap is fairly indisputable at this point. And it adds up.

But hey, in this depressing fight for economic equality, it's important to celebrate whatever victories come your way, I guess. So congratulations, ladies! The wage gap closed by a whole cent! We're now earning one percent more! Our labor is only devalued by 21 percent! Isn't it exciting?