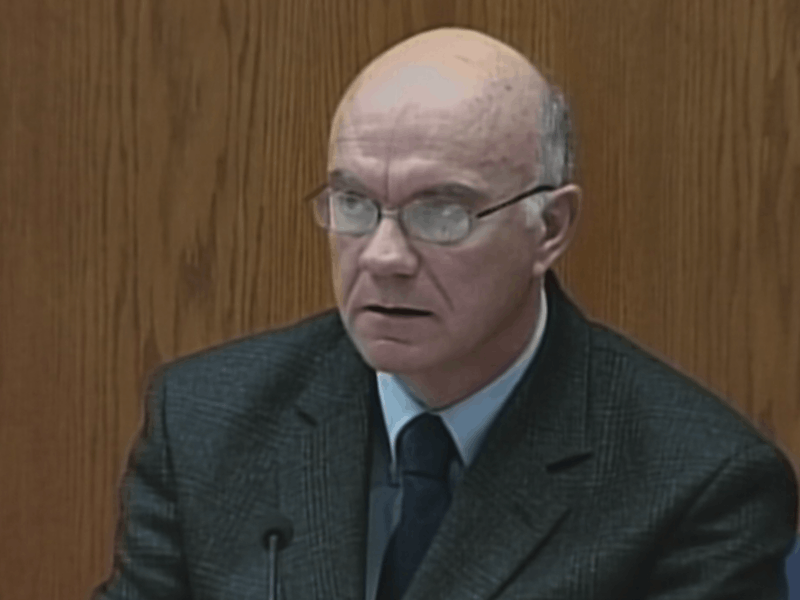 The new true crime addition to Netflix, the documentary Making a Murderer, has everyone talking about Steven Avery, the Wisconsin man sentenced to life in prison after being convicted of murdering photographer Teresa Halbach in 2007, just a few years after he was exonerated from a wrongful rape conviction of which DNA evidence freed him after 18 years in prison. In the docuseries viewers see that Avery maintained his innocence then and maintains it now, despite his murder conviction. "I'm innocent," he claimed after his arrest in 2005 in connection with Halbach's death. But, there are more people at play in the series than just Avery. The documentary also introduced viewers to several members of the Manitowoc County Sheriff's Department including Lieutenant James Lenk. In the series, Lenk, along with his colleague Sergeant Andrew Colborn, were accused by Avery's defense lawyers Dean Strang and Jerome Buting of planting evidence on Avery's property that helped lead to Avery's conviction. Both Lenk and Colborn denied these allegations while on the stand at the trial, with Lenk saying, "No, sir, I definitely did not [plant evidence]," and Colborn responding, "That's ridiculous. I have not." Lenk wasn't on trial like Avery was, but his integrity was certainly called into question during the proceedings now seen on Netflix. But, 10 years after Avery's initial arrest, where is Lt. James Lenk now?

Since the events of Making A Murderer, Lenk has been leading a pretty private life. A staff search of both the Manitowoc County Sheriff's Department directory and the full county civil services site reveals that Lenk is no longer employed by either. (Although Colborn is listed as working for the Sheriff's Office still.) Little about Lenk's personal life is relevant to the documentary and thus wasn't shown; his testimony in Making A Murderer focused only on the level of involvement that Manitowoc County officers had in the investigation, and Lenk's discovery of Halbach's car key on the floor of Avery's trailer.

In the series, Lenk admits under oath to having volunteered to search the Avery residence, even though he'd been deposed on the matter of Avery's $36 million civil suit (for his wrongful rape conviction) just three weeks prior. When asked by Avery's attorney if he thought it would have been better to have someone not deposed in the suit search Avery's room, Lenk said, "No sir, I don't think it would've been." Still, many Making a Murderer viewers are casting Lenk in one of the "bad guy" roles of the series.

In 2007, Colburn released a statement addressing the lasting effect that the allegations of misconduct could have on his town. "I hope and pray that [Avery's guilty] verdict puts to rest any suspicions or loss of confidence this community felt toward our department," he told the media.

Lenk did not issue a formal statement then, and has not spoken out since Making A Murderer's release. Bustle has reached out to the Manitowoc County Sheriff's Department in an attempt to reach Lenk for comment, but has not yet received a response. But, the Avery trial prosecutor Ken Kratz spoke up on behalf of the accused officers in 2007, as seen in the series:

Lenk would likely be in his mid-60s by now, and has seemingly retired from law enforcement completely. Whether he'll comment on the series remains to be seen.

More like this
Where Is Charlie Evens Now?
By Morgan Leigh Davies
Meet Charlotte Laws, The Woman Who Helped Take Hunter Moore Down
By Arya Roshanian
Here’s What Hunter Moore Is Up To Now
By Arya Roshanian
'The Sandman’s Ending Is A Departure From Neil Gaiman’s Comic Book Series
By Kadin Burnett
Get Even More From Bustle — Sign Up For The Newsletter