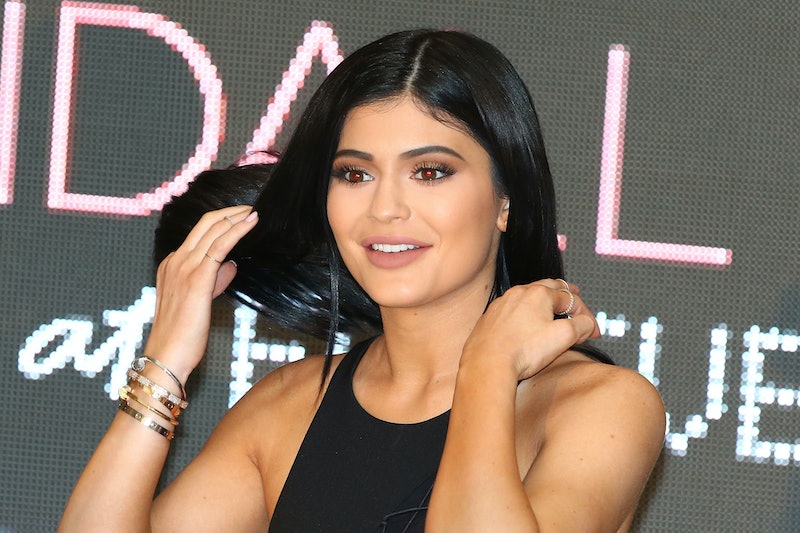 The personal style hits keeping on coming! After causing quite the Christmas ruckus by showing off a photo of a huge diamond ring that deserved its own zip code, Kylie Jenner posted her red hip tattoo. The tattoo is tiny and it's the phonetic spelling of the word "sanity," according to The Daily Mail. I poked around and found the meaning of Jenner's tattoo a bit confusing to discern at first, as did The Metro UK!

However, this image may be the big reveal of the hip area tattoo she got from Bang Bang in NYC back in November. The matte lip-loving teen only posted a photo of the process at the time. But you never know, since that ink looked black. Hmm... let us go forth and speculate.

Leave it to Jenner to always keep us guessing when it comes to her accessories, be it maaaj bling or permanent ink! She practically broke the Internet with her Insta pic of that rock on her finger, leading to rampant speculation that she got engaged during the happy, party-fueled holiday season.

Now, her red script tattoo, which is tiny and adorbs, will have her fans and followers wondering about its underlying meaning.

You can't help but think that it refers to how Jenner manages to stay grounded, despite that general craziness that is her life as a reality star and a fashion influencer.

One can only imagine that life as a Kardashian is a whole other level of insanity. This red word should remind her to stay sane amid the "khaos." I also like that the script is red, as opposed to the standard black.

I also like that she chose to do a phonetic spelling, as opposed to the actual word. It's unique.

There's the proof that it translates to "sanity."

But that's not the sole thing to sparkle in her life this holiday season.

Her bling was pretty banging, too.

Her red tattoo matches her holiday-themed outfit and other accessories. Funny how that works.

Jenner's "other" tattoo is also red. She got this tiny red heart on the back of her arm and its authenticity and permanence were questioned at first.

Clearly, though, she has a thing for red tattoos.