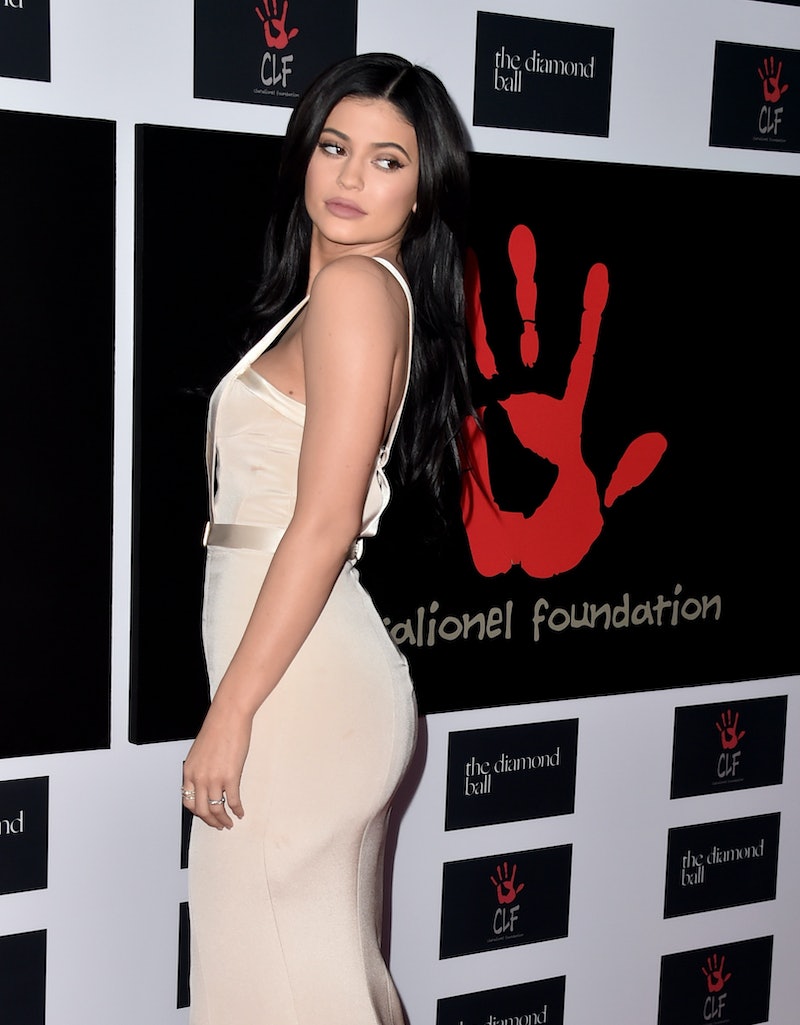 If you happen to be one of the 46 million people who follow the youngest member of the Kardashian-Jenner brood on Instagram, you probably noticed something interesting late Sunday night. Kylie Jenner has a new tattoo on her hip, and it's both dainty and meaningful. It's the word "sanity" spelled out phonetically in red ink, which seems like it would be the opposite word she'd use to describe her life. But regardless of the real meaning, her latest body art addition is hardly her first tattoo. So how many tattoos does Jenner have? If she's not hiding anything from us, this will be her third.

And analyzing her sanity tattoo alongside the other ink she's gotten since turning 18 in August, it's easy to see that Jenner's staying along the same stylistic path: Minimalistic and dainty — and mostly in easy to hide spots, which make sense if she wants to continue modeling, since there's only so much you can do with cover up makeup. And her new tattoo is the second one she's gotten that's red, so it definitely seems like she might be going for a theme here.

The idea of needles poking into my skin sounds mildly terrifying, but if I were going to get a tattoo, it'd be a lot like the ones Jenner has chosen so far.

Jenner's first tattoo surfaced in August, a tiny red hart on the back of her arm, above her elbow. She never explained the meaning of it, although reportedly, it symbolizes "all of the love in her life." This includes the love of her BF, Tyga, which is actually kind of sweet... and a much better way of paying tribute to a relationship on your body that doesn't involve your significant other's name, which would quickly become a nightmare the minute the relationship goes south.

Her other tattoo is black text on her hip, and since she only shared video of it on Snapchat, it's hard to tell what the word (or words) actually say. Some fans think it could say "freedom," or "Michael" — Tyga's real first name — but since Jenner hasn't confirmed any of this herself, the jury's still out on that one.

Being that the 18-year-old has gotten three tattoos in the span of four months, I have a feeling there are more to come. Next, may I suggest her Lip Kit logo? It looks pretty sweet as a tattoo.

More like this
Jennifer Garner Shared The Beauty Wisdom She Thinks Is Better Than Fillers
By Brad Witter
Meet Foreverist, The Skin Care Brand That Keeps Tattoos Looking Fresh
By Audrey Noble
Kendall Jenner & Devin Booker Have Seemingly Reconciled Just Weeks After Split
By Jordyn Tilchen
This K-Beauty “Wrinkle Bounce” Stick Is Going Viral On TikTok
By Destiny Knight
Get Even More From Bustle — Sign Up For The Newsletter