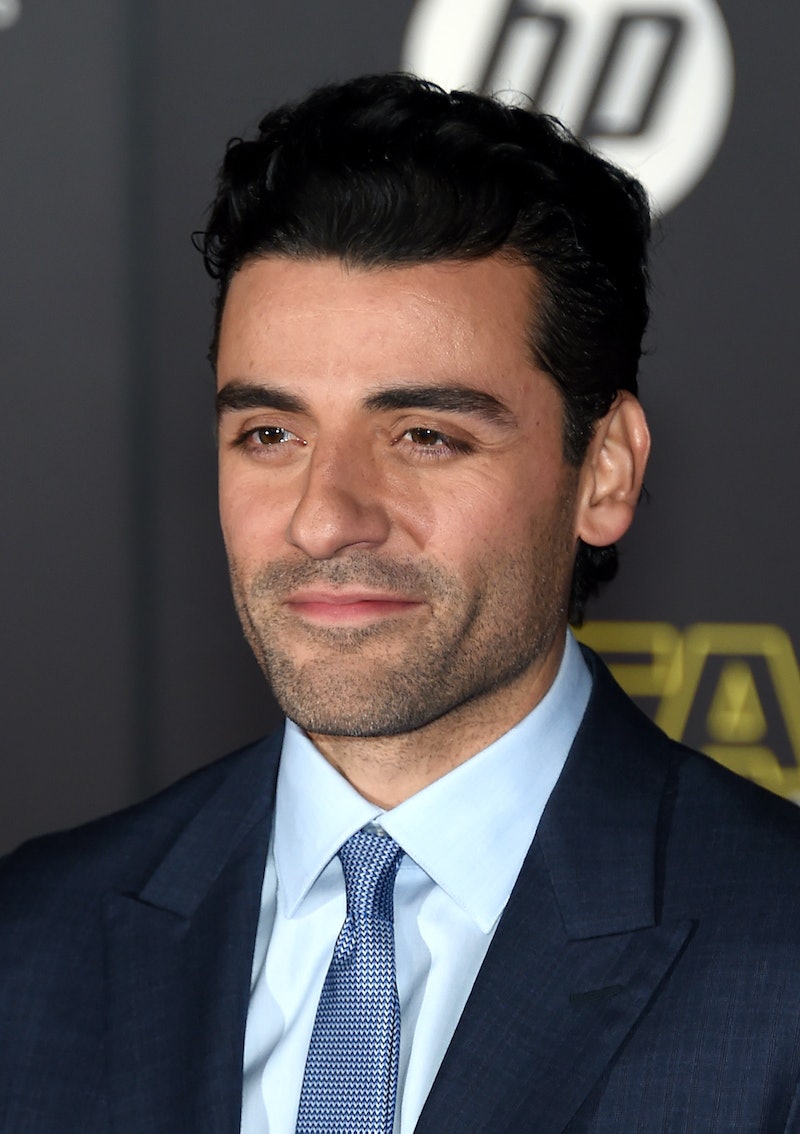 Star Wars: The Force Awakens is the gift that keeps on giving, especially when it comes to the movie's charming cast. I, for one, am excessively pleased that Star Wars has made a star out of Oscar Isaac, who plays General Organa’s most trusted X-Wing pilot, Poe Dameron. Isaac is by no means an unknown actor — he’s appeared in films like Drive, Inside Llewyn Davis, and Ex Machina, and plays the titular villain in the upcoming X-Men: Apocalypse — but there’s a difference between being famous and being Star Wars famous, a threshold that he has now crossed. The insane popularity of this movie means that Isaac has been everywhere lately, not that I've heard any complaints. The Force Awakens star is as appealing as his character (visually and otherwise) and seems to be having the time of his life being a part of this legendary franchise. Isaac is a little bit of a dream, to be perfectly honest.

The actor has charmed in so many interviews and appearances lately that it’s hard to keep up. So consider this list a primer on a new sci-fi crush who’s now an inextricable part of the life of any Star Wars fan. Again: I don’t hear any complaining. Here are 16 of Oscar Isaac’s most lovable moments so far.

1. When He Wished For A Rainbow Lightsaber

Picture it: Poe Dameron keeping the peace and the fabulousness throughout the galaxy with his trusty rainbow lightsaber. What a beautiful mental image.

2. When He Was Enlightened About Gender

I don't know why press and fans keep trying to gender a droid (stop asking if BB-8 is a he or a she!) but Isaac isn't having it either. And his concept of gender identity for humans is pretty sophisticated and refreshing as well.

3. When He Geeked Out Over The Merchandise

Welcome to the Star Wars family, Oscar Isaac. Your face will be on more purchasable items than you ever imagined.

4. When He Had Cheesy Star Wars Dad Jokes

I don't care how famous you are, you should never take an open bar for granted.

6. When He Repped His Home Country

Isaac is responsible for writing some of his character's history. He suggested that Poe hail from Yavin 4, the Rebel Base location that Tikal, Guatemala played the part of in Episode IV. What a cool, geeky way to honor his heritage.

7. When He Validated Your Poe/Finn Feelings

You can't fake chemistry, and Oscar Isaac and John Boyega have that instant connection in spades in their scenes together in The Force Awakens. Whether or not the first same-sex romance in Star Wars history comes to fruition in future movies, it's beyond cool that both actors have confirmed that there is an attraction there.

8. When He Made Sure That Co-Star Lupita Nyong'o Had His Undivided Attention

Plastic Poe Dameron and Oscar Isaac: both gentlemen of the highest order.

9. When He Sang A Festive Duet With Co-Star Daisy Ridley

Oh, and he can sing. Watch Inside Llewyn Davis immediately for more swooning over Isaac's warm, smooth voice.

10. When He Made Friends With Carrie Fisher's Famous Pup, Gary

Please don't make me decide which of these faces is cuter. I don't have the strength.

11. When He Was A Big Enough Star Wars Dork To Cosplay A Character Nobody Remembers

This is the kind of commitment to detail and obscurity that goes over really well at Comic Con.

12. When He & Costar Domhnall Gleeson Did Their Best Wookiee Impression

What's Wookiee for "Do you want to date me, please?"

13. When He Danced It Out On The Late Late Show

With hips that definitely do not lie.

14.When He Daydreamed About Bringing That Dancing To Star Wars

You know Poe blasts his X-Wing Sirius radio on practice runs and does a little driver's seat bop.

15. When He Wasn't Intimidated By Co-Star Gwendoline Christie's Amazonian Height

It takes a big man to be so delighted to look so small.

16. When He Sang Bill Murray's "Star Wars" & Melted Every Heart In Hearing Distance

Could a solo album of Star Wars-related tunes be far behind? I certainly hope not.

Thank you for giving us Oscar Isaac, Star Wars. The movies couldn't have a more likable ambassador.