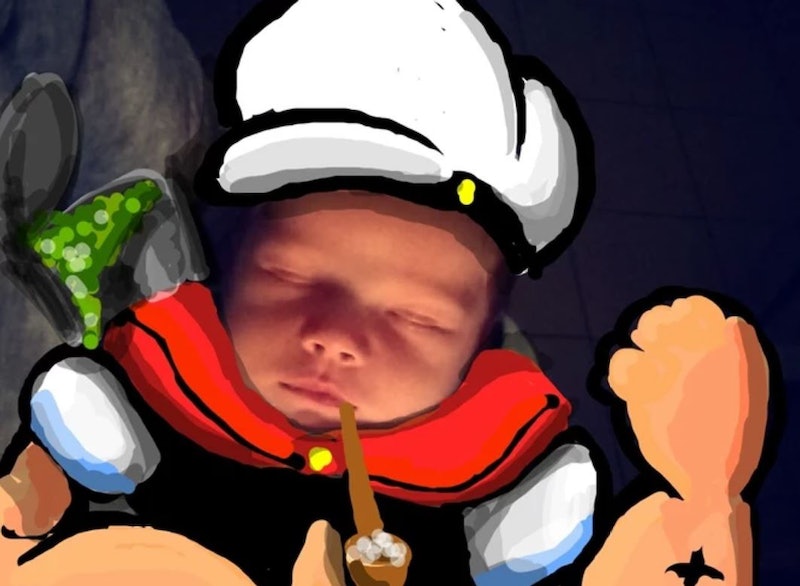 Step aside, Snapchat aficionados, connoisseurs, and virtuosos — there's a new master snapper in town. Graphic designer Lukas Costeur from Belgium, who also happens to be a new dad, uses his Snapchat account Snapdad to make adorable snaps with his baby, Felix. Featuring some incredible artistic talent and the cutest little peanut you ever did see, Snapdad showcases the image-based social media app at its most creative — and Costeur gives us all a lesson in how to win at Snapchat in the process.

Of course, this isn't the first time Snapchat has been used for wildly artistic and impressive digital masterpieces. Over the summer, we met NannLL, the self-proclaimed "Queen of Snapchat"; furthermore, we've also seen others like Molly Mitchell, who drew her own perfect boyfriend on Snapchat, and mplatco, who turns his everyday life into snap-worthy art, harness the app's abilities in some fantastic ways. Costeur's snaps are different, though: Not only do they allow his artistic talent to shine through, but he's also got an absolutely precious baby. According to the Snapdad Tumblr, Felix is just over a month old — and he's already more famous than I'll ever be.

Costeur tells Bustle via email that his job in product design has gotten him used to sketching; however, he notes that perfecting the art of the snap is a little different. "The difficult part is that I do this on a small smartphone with a normal stylus... It takes about 30 to45 minutes to finish one. If Snapchat doesn't crash, that is," he says. And as for fatherhood itself? "We're enjoying every bit of it," Costeur says. "Even the harsh sleepless moments. That's why I started drawing. To make the time he's trying to fall asleep a bit more enjoyable."

Costeur transforms Felix into all sorts of characters with cute little captions, from a sleepy elf who is utterly exhausted by wrapping presents to a tiny Aladdin who also happens to have a pacifier in his mouth. Some of Costeur's personal favorites include Spiderman, Santa, and Waldo from Where's Waldo — but I'll just let the snaps do the talking. Check out 10 of my favorites below, and visit Snapdad on Tumblr to see more.

Because there's nothing more adorable than a baby with a top hat, cane, and mustache.

The Boy Who Lived... And Then Got Snapchat Famous.

I wonder if people will still be watching Toy Story when Felix is old enough to understand it.

In this case, some of the Pokémon are probably little Felix's size.

He'll save the day with cuteness.

Complete with innocent yet evil smirk.

Who needs store-bought Christmas cards when you can make your own using Snapchat?

It's OK, Felix. Everybody poops.

Because even babies need their greens.