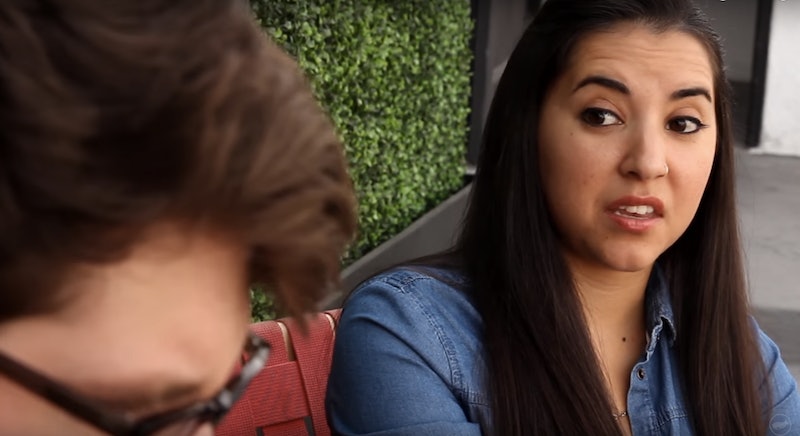 As a young woman living in a big city, I've become unfazed by the multitude of interactions I have with men on a daily basis that straddle sexist and insulting. Now thanks to BuzzFeed, we have a pretty accurate video featuring these types of interactions by showing what would happen if men were insulted like women, using the same lines we hear every day.

Sometimes it takes looking at the inverse of an idea to really see the original idea for what it is. If you're a woman, chances are you've probably been told by a man to smile or to be careful or to calm down. That's because these types of stereotypes — that women should be happy, should leave the hard work for men, and should get their emotions in check — are reinforced every time someone makes a comment like this and someone doesn't stop to educate the person and squash it.

So, if you take anything from this video, take a reminder to stand up for yourself and for women everywhere, who are literally going to explode if one more man they don't know tells them to smile. Don't let people get away with speaking to you in a sexist or derogatory fashion. Because the truth is, most people who use phrase like "cheer up," and "smile," and "let me do this for you," are trying to be helpful or kind. They're not aware of the role their taking in reinforcing stereotypes and offending you in the process. Men who are guilty of insulting woman with these phrases are not malicious, they're misinformed. So tell them! Or send them this video! Here are a few of my favorite phrases:

What good could possibly come of asking a woman to smile?! That's about the quickest way to make a woman frown.

Just, Focus On Being Hot

There's nothing a woman loves to hear more than that her looks are more important than her intelligence and skill set and personality and hard work. Nothing more!

How To Offend A Woman 101: imply that she's not capable of what she's already doing, bro.

Too Emotional For The Office

Actually overheard with my own two ears: a group of young men talking about how Hillary Clinton should not be president because she might make a bad decision on her period, because of all the hormones.