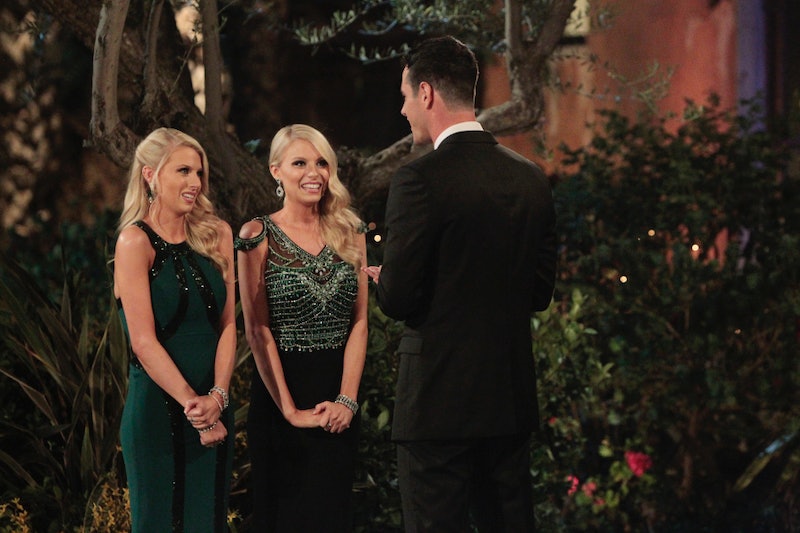 It's almost that time of year again! The time when one leading man gets to try his hand at dating 20+ women at the same time on national television while trying to find the love of his life to settle down with and marry. Sounds like a lot doesn't it? Well, I think Bachelor Ben Higgins is up for the job. ABC's hit reality dating competition series, The Bachelor, is entering its 20th season with this humble, down-to-earth, and charming Bachelor, who previously appeared on The Bachelorette as one of Kaitlyn Bristowe's suitors. Now, with the tables turned, there is a group of women set to compete for his heart, and among them are the twin sisters Haley and Emily Ferguson. But, are Emily and Haley identical twins?

According to Bachelor host Chris Harrison, they are! When Harrison spoke with Yahoo about six contestants to keep an eye on this season, including Emily and Haley, he said, "They are our twins, our evil twins with super powers. No, they are identical twins. They get out of the limo together, much to Ben’s surprise." But Bachelor Nation's fearless leader went on to say that although Ben will be dating the two sisters at the same time — yes, at the same time — he and the show treat them as two separate contestants... After they get out of the limo, I guess. However, because they are identical, Harrison admitted it could be difficult to tell the Ferguson sisters apart at times. Since I'm sure I'll have the same problem (and I'm hoping others will too so I'm not alone in this), I've assembled of list of how Emily and Haley are different to help us keep these sisters straight.

One Twin Gets Injured

As Harrison revealed to Yahoo, one of the twins — he doesn't specify whether it's Emily or Haley — hurts her thumb early on in The Bachelor Season 20 and that helped him to tell the sisters apart:

Thankfully, they did not do the grade-school twin thing and dress in matching outfits, and there was an incident early on and one of them hurts her thumb, so I could start to tell them apart because of the bandage.

So, while we're still getting to know the personalities of Emily and Haley, this may be a trick I use to tell them apart in the early part of the Bachelor season. Of course, my interest is piqued about what happens for one of the twins to need a bandage. Is this a love-related injury? Was it the result of a beauty emergency? (Curling irons are known to be especially vicious.) We'll have to wait and see, of course.

Music May Play A Role

According to their Bachelor bio pages, both Emily and Haley enjoy country music, but Haley also lists alternative music as her genre of choice. Although this can include a wide range of artists, her T-shirt tastes may offer a hint. She can be seen on Instagram sporting shirts for bands like Kiss and The Rolling Stones. Of course, Emily also seems to have a love of alternative music shirts for bands including The Ramones and Guns 'N Roses, so perhaps their tastes are more aligned than they first seem. Still, these band shirts may help us tell the pair apart should they wear them on the show.

Turns out, these twins don't always think the same! When they were both asked by ABC who they would be for a day if they had to be someone else, Emily answered she'd want to be her sister, "Just to see if she thinks exactly like me or to see how different we really are." So did Haley also say her sister? (I think you know where this is going.) She did not, she answered Taylor Swift: "Because she’s a classy gal! I love everything about her and all that she does." So, if you had any remaining doubts about these twins having separate personalities, their answers should erase it. Now I have to wonder how these two would do on the Match Game.

Although Emily and Haley have a lot in common in addition to their looks, it seems there will be subtle ways to tell the sisters apart. Plus, once The Bachelor premieres, I'm sure this list of differences will get even longer!