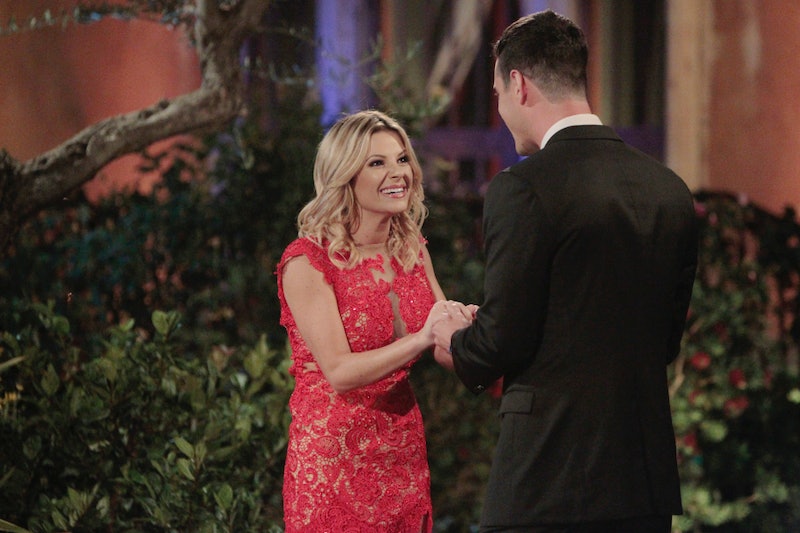 Along with the whirlwind romance and the increasingly out-there date ideas, the premiere of the upcoming season of The Bachelor ushers in a new group of women vying for the leading man's heart. In Season 20, that man is none other than fan favorite from Kaitlyn Bristowe's season of The Bachelorette, Ben Higgins. The women competing for his affections is an interesting bunch, especially Samantha — so let's find out just who Samantha Passmore is, and how the Bachelor contestant will spend her upcoming season.

Bachelor Nation knows the basics, of course: Passmore will be competing alongside a group of ladies to win the heart of Higgins. So far, it's known that group will also include small town marketer Caila Quinn, as well as some familiar faces. (Of course it was a bit of a shock to see past contestants Becca Tilley and Amber James join Season 20 of The Bachelor, especially since Nick Viall created such a stir during Higgins' season on The Bachelorette.) Still, most of what's known about the Bachelor contestants comes from their social media profiles, their official Bachelor biographies, and little tidbits from around the web. So I used my best sleuthing skills in order to dig up everything I possibly could about Passmore. Unfortunately, there wasn't much out there, but here are seven things to know about the new contestant.

When I say there wasn't much out there about Passmore, I mean it. She doesn't have a Twitter account (how will she live-tweet with fans?), her Instagram account is set to private, and her Facebook profile seems to show only the bare bones to those who aren't her friend. Of course, this could all simply mean she's a private person, but for now it makes her seem mysterious.

Not only is Passmore a lawyer in Tampa, FL, she graduated in the top 20 percent of her class from Florida Coastal School of Law in May 2015. If that isn't impressive, I don't know what is.

She Has Eclectic Taste In Movies

Passmore lists her favorite movies as Remember the Titans, The Strangers, and The Bone Collector, an interesting mix of drama, thriller, and horror. Plus, she seems to have an appreciation for Denzel Washington — although, let's be honest, who doesn't?

She Has A Wild Side

In addition to listing one tattoo on her Bachelor profile (I wonder what it is), Passmore has pictures from earlier this year show her with a lip ring — though it seems she took it out prior to filming The Bachelor. Still, it's certainly a hint that she can be more adventurous, which Higgins may just be looking for.

She Enjoys Being Outdoors

Speaking of adventurous, Passmore has posted multiple photos of herself wakeboarding on her Facebook profile, and she can be seen on the slopes in others. Since she claims to love both hot and cold weather in her Bachelor bio, you can be sure she appreciates both winter and summer for their various outdoor activities.

She Cares About Her Family

Of course, one of the most important dates on The Bachelor is when the star meets the contestants' families. According to Passmore's bio, this is a pivotal moment for all her relationships as well: "My parents’ approval means everything to me. I don’t know if I could end up with someone they absolutely didn’t like." In addition to her parents, Passmore has a sister that she's close to as well.

She's Down to Earth

Passmore has one of the best answers to the question of what she would do to impress a man:

I would hope that just being myself and spending quality time would be enough. If he is the right man for me, I shouldn’t have to work so hard to impress him.

From everything I know, this contestant seems to be on The Bachelor to find a real, honest-to-goodness partner for herself, and I can't be the only one hoping she does just that.