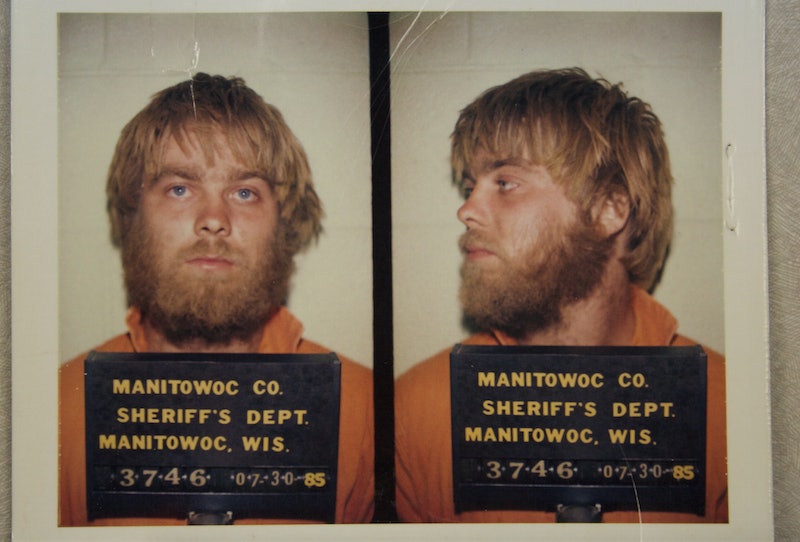 At the end of the Netflix docuseries Making a Murderer , it's revealed that Steven Avery is still in jail for a crime he claims he didn't commit, despite his conviction. The documentary's primary focus is the investigation and trial regarding the murder of Teresa Halbach, which resulted in Avery being convicted of intentional homicide in 2007. After watching, many viewers believe that Avery and his nephew Brendan Dassey are innocent, and they are raising a scary question: If it wasn't them, then who did kill Halbach? As has become tradition whenever a true crime story without a clear answer comes along, fans have taken to the Internet to post their ideas, and sites like Reddit are full of theories about Making a Murderer .

The r/MakingAMurderer subreddit has become a hotbed of discussion regarding the series — ranging from support for the Avery family to anger at the justice system to theories regarding what happened to Halbach. Much like Internet sleuths attempted to pick apart the Hae Min Lee case from Season 1 of Serial, fans have been analyzing the series for clues as to who murdered Halbach, since many viewers don't believe it was Avery or Dassey, in spite of their convictions. Some theories are strange enough to sound like the pulpy crime fiction Dassey claims to read, while others are more straightforward.

While you already have to take anything from Reddit with a grain of salt, let's also keep in mind that these are just theories. I'm only acknowledging they exist; not backing up any of their claims. The intense discussion simply proves this show's popularity, and how it has stimulated a lot of (perhaps at times overactive) imaginations.

Hillegas was interviewed in court regarding Halbach's murder. Avery's lawyer, Jerome Buting, wondered why Avery was the only suspect considered. He said in the docuseries:

In most cases, the people who are close to a victim are the ones who are in fact the killers. And, in this case, in every single instance, all those people who are close to her, the police never investigated any of them. They never from the minute the case was reported considered — seriously considered — the possibility that Teresa Halbach was killed by somebody she knew.

There's of course no way to know for certain how much the police looked into Halbach's friends and family. Special Agent Fassbender claimed that Avery wasn't the only suspect investigated: "We go into an investigation and you're not gonna lock and load. You're gonna listen to all the intelligence and information being brought in, look at all the evidence. The object is to allow the evidence and the facts that are uncovered as you go along to lead you to the most logical suspect," he said in the documentary.

However, in the series, Hillegas appears to confirm that the investigators didn't explore him as an option when he states on the stand that he'd never been asked for an alibi for the night of Halbach's murder. "So it's fair to say you weren't in any way treated as a suspect that you could tell?" Buting asked him. "That's correct," he answered.

Reddit user jaredwa theorizes that Hillegas should have been a suspect, claiming that certain aspects of Hillegas' testimony were suspicious: "[Hillegas] had [Halbach's] password to get into her Cingular account ... it's very possible that he had it to get into her voicemail." The user also alleges that Hillegas had a suspicious amount of access to Avery's property when the search for Halbach began; the post cites Hillegas' leadership of the search parties, as shown in the Netflix documentary, and Hillegas' perceived access to the Avery property, as shown in the documentary. Hillegas did not return Bustle's request for comment regarding this observation.

In the docuseries, Hillegas said the last time he saw Halbach was Sunday, Oct. 30 2005, the day before she went missing. "I think I was dropping something off for Scott [Halbach's roommate] and [Halbach] was sitting there at her computer," Hillegas said on the stand, as seen in the docuseries. "So the last time you actually saw Teresa was Sunday?" Buting asked. "Yes," Hillegas confirmed.

It's unlikely Hillegas had any involvement in any wrongdoing: he was never named as a suspect by the defense. Avery filed a post-trial motion in 2009 with a list of other people Avery alleged to be suspects. Hillegas' name was nowhere on the lengthy list.

Some Internet users have been pointing fingers at Teresa's brother, Mike Halbach, as a possible suspect, as reported by various outlets from Gawker to MTV to Maxim . In a Reddit theory roundup from the New York Post, they wrote about one such theory.

Viewers have noted odd behavior from Halbach’s camera-happy brother, including his body language when doing an interview alongside her ex-boyfriend as well as this excerpt from an interview he did with the documentarians one day after his sister had been reported missing.Interviewer: “How are you holding up?”Mike Halbach: “Um . . . I mean… the grieving process, you know, could last days, could last weeks, could last years. You know hopefully, we find answers as soon as possible so we can, you know, begin to . . . hopefully, you know, move on, hopefully with Teresa still in our life.”

Mike's only interaction with the series comes in the form of the times he acted as the family's spokesperson at press conferences. He declined to participate further with the filmmakers according to the filmmakers' interview with Vulture, so his side of the events weren't documented in the same detail that way Avery's was. Any opinions that Mike exhibited any "odd" behavior could be attributed to him being uncomfortable in the spotlight while dealing with such a tragedy. Mike Halbach did not return Bustle's request for comment.

As is the case with Hillegas, it's unlikely Mike had any involvement in any wrongdoing. Mike, like Hillegas, was never considered a suspect by the prosecution or the defense. In Avery's 2009 post-trial motion, he made no mention of Mike's name on his lengthy alleged suspects list. Additionally, not every Reddit user is pointing the finger. One user, docuseriesfan, wrote a post saying Mike shouldn't be considered a suspect by viewers.

Being the family spokesman is a lot of pressure for a guy in his early 20s. He knows someone needs to be the voice for the family, but I can't imagine how hard that is when you are dealing with the stress/agony of your sister going missing and eventually being murdered, and having to speak in public at the same time. That would be incredibly stressful to say the least. You're probably not sleeping much, and spending hours around your family trying to comfort them as well as yourself. That's why I don't put much stock into any statements that seemed "off" to us in the context of this documentary ... To me, suspecting Mike Halbach of something is just as outrageous as all of the holes in the police investigation of [Avery] and [Dassey]. None of it makes sense, and I think it's quite unfair.

Reddit user dem_eggs attributes this theory to a "lawyer friend," who supposedly said that viewers should pay attention to Brendan Dassey's brother, Bobby, and Avery's brother-in-law, Scott Tadych. The user alleges that Bobby's timeline of Halbach's whereabouts, which he gave in court, was "contradicted by [the area's school] bus driver who had a much better reason to keep track of the time on her routes." As seen in the documentary, Bobby placed Teresa taking pictures on the Avery property at about 2:30 p.m.

During the trial, as seen in Episode 5 of the series, prosecutor Ken Kratz asked Bobby what he saw and when. "How do you know that it was about 2:30 in the afternoon?" Kratz asked. "'Cause I was going hunting that night and that's the time I wanted to get out," Bobby replied. "I seen [sic] Teresa Halbach get out of the vehicle and start taking pictures."

Later in the series during Episode 6, the local bus driver Lisa Buchner was interviewed during the trial and placed Teresa at Avery's property closer to 3:30 or 3:40. When asked by Avery's lawyer Dean Strang what she saw and when, Buchner replied, "I remember seeing a woman taking photographs [at] 3:30 to 3:40." Buchner testified, as seen in the series, that she knew the timing of the incident because it was the usual time that she dropped the Dassey boys off. "It was about the same time every day. Same route," she said, as seen in the series.

The same Reddit user also found issue with Bobby's alibi, claiming, "His only alibi was his step-dad, who's [sic] own testimony changed regarding the timeline. The step-dad's alibi was... Bobby Dassey." According to court documents filed by Avery's lawyers in a 2009 retrial request (excerpts seen below) that the user cites, Dassey and Tadych were indeed each other's alibis.

Avery himself alleged that Tadych and Bobby should have been suspects in that 2009 post-trial motion he filed. In it, Avery's lawyers claim that a co-worker of Tadych's alleged that "Tadych had left work on the day that Steven Avery was arrested, and that he was a 'nervous wreck' when he left." The documents also said "another co-worker of Tadych reported that Tadych had approached him to sell him a .22 rifle that belonged to one of the Dassey boys ... A .22 rifle was believed to be the murder weapon in this case."

Bustle reached out to Bobby Dassey and Scott Tadych for comment, but has yet to hear back.

In the wake of the documentary's release, Avery's defense lawyer Jerome Buting has showed his support for Reddit users' theories, and encouraged people to continue speculating.

It's hard to imagine that we'll ever truly know what happened to Teresa Halbach, but hopefully the popularity of Making a Murderer will lead to some kind of justice for Avery and Dassey if they are innocent, as so many viewers have speculated.

Editor's note: This article has been updated since its original version to include more information about the involvement of Ryan Hillegas, Mike Halbach, Bobby Dassey, and Scott Tadych in Steven Avery's trial.