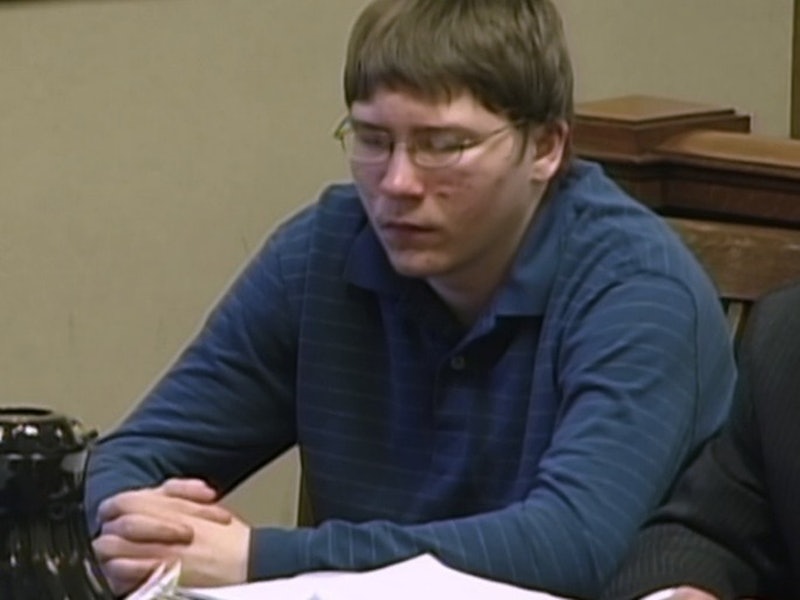 There are few cases as complex as the murder of Teresa Halbach and the subsequent convictions of Steven Avery and his nephew, Brendan Dassey. Netflix's new docuseries Making a Murderer consists of 10 hour-long episodes, where the filmmakers take a close look at the investigation and the trials of Avery and Dassey — and series has certainly raised concerns among some viewers that the defendants may not have been treated fairly. DNA evidence implicated Avery, but he has always maintained his innocence and he believes he was framed by the sheriff's department. This is something Under Sheriff Robert Hermann denied in the documentary saying, "It's not realistic. It's impossible ... it's so far fetched it's impractical." As for Avery's nephew — there is no DNA linking Dassey to the crime, but he did make a confession in March 2006 which he later recanted during his trial in April 2007. Because of this, one of the central areas of debate in this case is whether or not Brendan Dassey made a false confession when he was 16 in March 2006.

For many of us, the idea of making a false confession is hard to understand. But, the bottom line is that they can occur and it's worth exploring the statistics and psychology behind false confessions. Of course, none of this proves that Dassey's confession was fabricated or not (the prosecution stood by its validity throughout the docuseries) — but, as viewers debate the complexities of this case, it can't hurt to have some background knowledge about the subject.

Although suspects of all ages make false confessions, they are more common amongst juveniles. According to Steven A. Drivin of Northwestern Law School, "juveniles are overrepresented in documented cases of false confessions." A study of 340 exonerations showed that 42 percent of juvenile wrongful convictions involved false confessions, while only 13 percent of the exonerated adults had confessed.

What's the reason for this? In 2013, the Juvenile Justice Information Exchange spoke with Samuel R. Gross, a professor at the University of Michigan’s Law School and editor of the National Registry of Exonerations. He noted that, since juveniles are more likely to feel frightened and confused during an interrogation, it's easier to manipulate them. They also have a lower understanding of the long-term consequences of their actions. Although everyone's different, Gross told JJIE that many people provide similar reasons when asked why they falsely confessed:

People say things like, ‘After five hours [of interrogation], I’d tell them anything they wanted to hear. ... And, ‘I told them what they wanted so I could go home,’ is probably the single most common thing people say.

And, whether the suspect is an adult or a juvenile, individuals with a low IQ are more likely to falsely confess. Again, this is largely due to the fact that these suspects are less likely to think about the long-term consequences of their confession. In the West Memphis Three case, 17-year-old Jessie Misskelley allegedly falsely confessed to murder and implicated two other teenagers, Damien Echols and Jason Baldwin, as his partners in crime. Misskelley, whose IQ is 70, later recanted his statement and refused to testify against Echols and Baldwin. Nevertheless, all three were convicted of murder and served 18 years in prison before DNA evidence allowed them to take a plea deal and be released from prison. According to CNN, in response to their release, Prosecuting Attorney Scott Ellington said in 2011: "This is an appropriate resolution to this case at this time ... Only time will tell as to whether this was a right decision on my part."

In another notable case of alleged false confessions, in 1989, not one but five teenagers confessed to the rape and beating of a young woman in Central Park after being interrogated for up to 30 hours each. DNA evidence from the scene wasn't a match, but they were convicted and spent seven years behind bars before the DNA was finally linked to the true perpetrator — a serial rapist who acted alone. After the five were freed, Celeste Koeleveld, New York City's executive assistant corporation counsel for public safety, responded to the wrongful conviction saying, “We believe that, based on the information that the police and prosecutors had at the time, they had probable cause to proceed and the confessions were sound."

In a recent documentary about the case, entitled The Central Park Five, social psychologist Saul Kassin emphasized the ramifications of a false confession: “Once the confession is taken, it trumps everything else. It trumps DNA evidence. Its effects cannot be reversed.”

Although Dassey has been convicted of the rape and murder of Teresa Halbach, he was 16 years old at the time of his interrogation — and his IQ is reported to be 70. Additionally, certain aspects of his confession sound similar to these documented cases of false confessions, such as key details changing every time he told the story. And, if there's one thing we've learned from Making a Murderer, it's that we should look closely and critically at every piece of evidence — alleged confessions included.