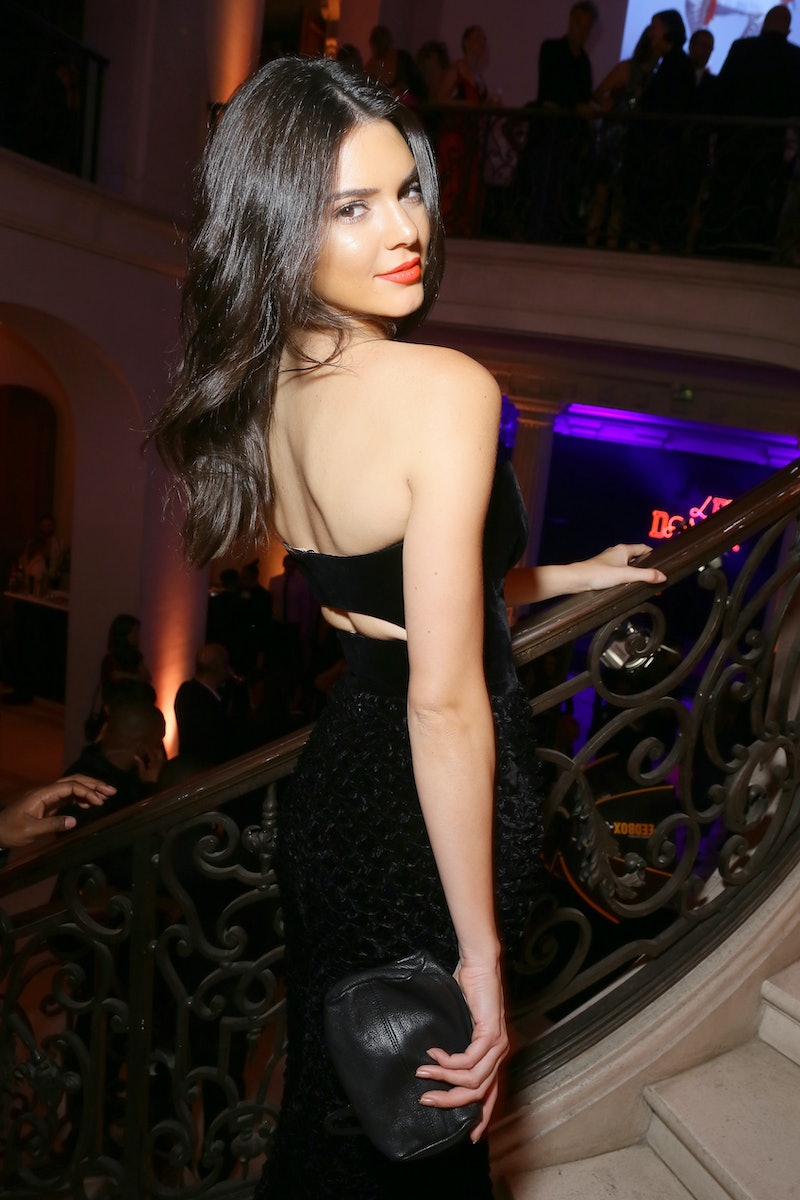 Although all those rumors about Kourtney Kardashian and Justin Bieber hooking up seemed rather unbelievable, Kourt's younger sister is now the subject of dating speculation herself. Nope, not Kylie Jenner and Tyga — everybody knows they're still together. Instead, I'm talking about Kendall Jenner and Drake. Is the Victoria's Secret supermodel dating the "Started From The Bottom" rapper? Considering the reality TV family's history of unexpected relationships, anything is possible. Especially since Drake attended Kris Jenner's annual Christmas Eve party.

After the festive bash, Drake shared a photo of him posing with Kris and Kylie. It wasn't until Monday that he posted a selfie with Kendall, which makes it look like maybe they're more than just friends. Even though I don't think a picture together confirms anything, it definitely sparks some suspicion. Who do you think he was at Kris' party to see? I'm sure it wasn't Tyga (considering their public feud). Maybe he really was there to hang out with Kendall.

Since it's interesting to think about, I've decided to take the logical approach and examine the evidence from both sides. There are just as many reasons that these two could be dating as reasons they couldn't be. Fans can decide for themselves.

Reasons Why They May Be Together:

1. They've Hung Out Before

Back in January, Kendall and Drake sparked dating rumors when they went out to dinner together in LA. Sure, there were other friends in attendance, but that doesn't mean they didn't have any one-on-one time. Then in November, there were rumors that they were "low-key flirting" at Kendall's 20th birthday party. Very interesting!

2. They Look Awfully Cozy In This Picture

3. They're Both Not Seeing Anyone

There haven't been any believable romance rumors for Kendall since Harry Styles. As for Drake, he and Serena Williams are donezo. That does leave opportunity for them to date new people (aka each other).

Reasons Why They May Not Be Together:

1. Drake Is A Longtime Family Friend

Drake has been a family friend for awhile — just look how friendly he is with Kylie and Kris in this snapshot. In 2013, Kim and Kanye even arranged for Drake to perform at Kylie's sweet 16.

Side note: Tyga performed at Kendall's 16th birthday in 2011, way before he began dating Kylie. How serendipitous would it be if Kendall and Drake dated after he performed at Kylie's sweet 16? That'd be a crazy coincidence.

2. Drake Takes Photos With A Lot Of Women

Whether basketball stars or former Degrassi co-stars, Drake is no stranger to posing with women in his Instagrams. There's no way he's dating every female he posts photos with, so his and Kendall's kissy photo doesn't confirm they're together either.

3. Kris Is His Favorite Family Member

In a video interview with E! News, Drake admitted he "really likes" Kendall, but said the same for Kylie and Khloé. And when it comes to his favorite member of the reality TV fam? He chose Kris.

Honestly, I'm just as confused as ever. But if Kendall and Drake actually are dating, I'm all for it!

More like this
Kendall Jenner & Devin Booker Reportedly Broke Up After 2 Years Of Dating
By Jordyn Tilchen
Kylie Jenner Shares A New Photo Of Her Son With Travis Scott For Father's Day
By Jake Viswanath
What’s An Open Relationship, Actually?
By Lexi Inks
Passive Aggressive Examples To Look Out For In A Partner
By Jessica Estrada
Get Even More From Bustle — Sign Up For The Newsletter