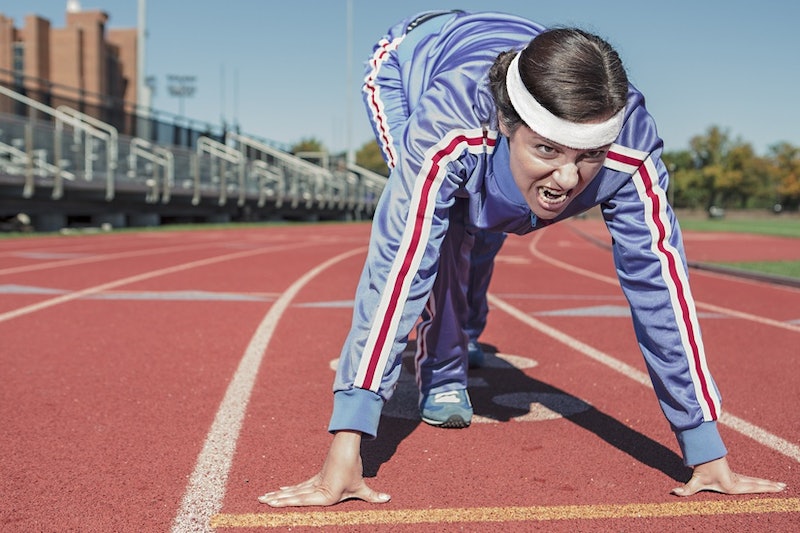 If there's one time of year people call on psychology, it's around New Year, when they want to know the best way to hack their own behavior to quit smoking, lose weight, find a new job, or drop their mild addiction to cheese once and for all. Resolutions are all about behavior change, and, as everybody who's failed to keep a resolution (i.e. most of us) will know, just intending to do something differently isn't enough. Even if you really, really think you'll do it this time.

Wading into the field of resolutions and how to keep them is actually a pretty contentious thing. Amy Cuddy, a social psychologist at Harvard, made a splash in 2014 when she talked about her theory that NYE resolutions are seriously bad for us: We make the wrong kinds of resolutions (too big, too absolute and outcome-focused, too negative about ourselves), set ourselves up for failure, and then feel rotten when we inevitably fail.

But it turns out that a peculiar discovery from marketing psychology may actually be a valuable hack for turning New Year's resolutions into mid-year smugness. It's called the question-behavior effect, and it's here to rock your world. Well, kind of.

So how does the question-behavior effect work, what does it do to the brain, and how can it make it easier for people to give up their slices of Brie, one day at a time? Here's what you need to know:

What The Question-Behavior Effect Is

The question-behavior effect is almost offensively simple. If you ask somebody about their future plans, in a questioning format, they're more likely to do it. It's been proven time and time again: Studies have shown that, if people are asked if they're planning to buy a new car in the next year, it's far more probable that they'll go out and buy a car than people who weren't. It spreads across industries, too. Tests have been done on gym use, recycling, volunteering, buying computers, voting, you name it — the question makes the behavior more likely.

This is actually a genius discovery for activists, marketers, personal trainers, and anybody else whose job it is to get people to take action. If you've ever received a pamphlet through the mail with the heading "Ask Yourself," you're being targeted by the effect. But you don't have to make money from it; you can just use it to hack your behavior for the next year.

We're not entirely sure how the question-behavior effect really works; all we know is that it does. There are two theories about its success and our brains, though. One goes that being questioned about your ideas and intentions brings them to the front of your mind, and makes you less likely to forget them. The other is that we get uncomfortable if we say we're going to do a thing and then don't; making us promise, aloud, in response to somebody else, that we're devoted to doing a marathon/learning Mandarin/getting good grades gives us a strong incentive to stick to it.

Part of this is already a key bit of New Year's resolution success: going public. If our intentions are a matter of public knowledge, or if we at least have somebody else who's aware of our intentions, psychologists believe we're more likely to stick to them. Peer pressure and all that. But having a person quiz you about your predictions for the year ahead seems to activate more than just a fear of disappointing them. Something about questions makes us want to live up to the answers.

What Kinds Of Questions Work Best

According to two studies in 2004 and 2006, there are particular types of questions that lead to better resolution-keeping. One found that self-prediction questions like, "Do you predict you'll exercise more this year?", work best, and that they're most effectively when they're really specific: like, "Will you go to Stateside Gym on West Boulevard for Zumba this year?" instead of just, "Will you go to the gym?"

The other thing that might help, according to the second study, is to make the goal easy to visualize or imagine. This can tie in with the first bit of advice, too. Keeping things specific, local, and part of something you already know makes it more comprehensible to you. And note the wording. Don't "promise" or "vow" or "resolve"; just predict, and believe what you're saying. Envision the future with you jogging off to the gym. Science believes it helps.

How To Make It Part Of Your Resolution Arsenal

Getting somebody to question you about your behavior in the next year isn't going to be enough; it's just a psychological hack to make it more likely that you'll actually stick to your words. It needs to be part of a bigger framework of thinking about your goals. The problem is that psychologists actually disagree on other aspects of resolution-keeping; some say you should go for big goals, others recommend keeping it small and achievable, and there's a school of thought that recommends forgoing resolutions altogether, replacing them with a more nuanced review of your achievements, fears, and needs for 2016. It's downright hard to change your own behavior, no matter how motivated you are.

But one big thing that psychologists do agree on is that shifting habits is an intense process that requires rewiring the brain; just wanting it badly (and having somebody question you about it) isn't enough. Questioning from an "accountability buddy," as they're called, needs to be combined with methods like regular monitoring, doing something small towards your goal every day, replacing negative promises ("I will not") with positives ("I will"), and whatever other aspects might fit your personal mentality. Start with the question and work from there. What do you predict about yourself this year?

There are limits, though: Beware the question-behavior effect when it comes to risky stuff. If somebody says "Do you predict you'll smoke?", a study from 2008 suggests that you're more likely to smoke in the future; the question-behavior effect can be used for undesirable stuff as well as excellent motives. Students who were asked about future drug use actually used more drugs than people who'd been asked a control question. Whoops. Seriously unhealthy behavior may demand more from us than just a question and an answer.