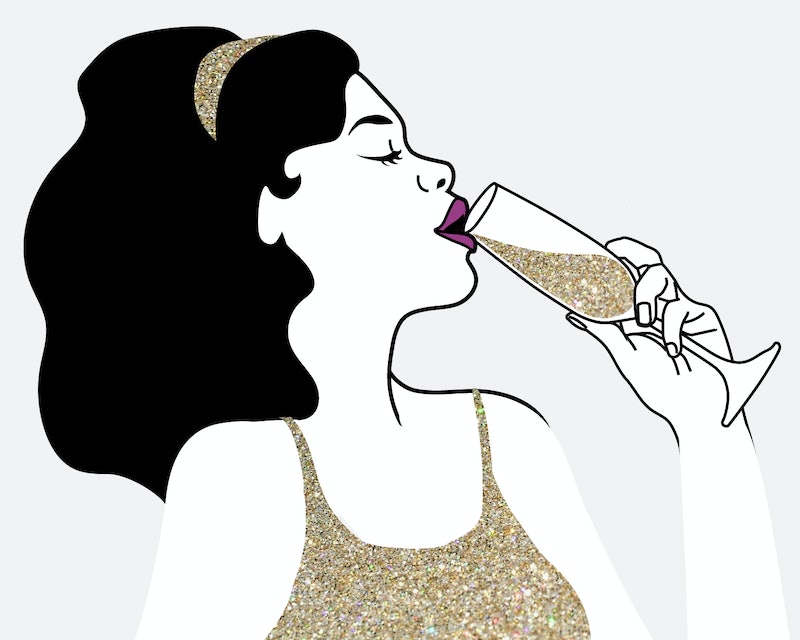 In my brief history of being a human, I've only ever had two New Year's Eve kisses that weren't total letdowns. One was with my dog back in 2008 (because omg puppy kisses), and one was with a person who I thought might be the love of my life, only to realize a few months later that this wasn't, in fact, the case (we're still friends, guys — I promise this story isn't that pathetic). That's why having a few fake kissing positions to try by yourself, hilarious though they may seem, in your make-out arsenal is also sort of brilliant. The thing about a New Year's Eve kiss is that it's pretty much just like any other kiss, only way more disappointing because you've spent the last few weeks hyping it up to be the defining, climactic moment of the holiday season, and a romantic scene-setter for the next 12 months of your life. This year, don't depend on anyone else to give you what you want — with these fake kissing positions, you can be your own New Year's Eve kiss. And really, can you think of anyone better to ring in the new year with?

So grab a glass of champagne, put on a swipe of lipstick, and prepare to pucker up. Whether you're single or in a relationship, trying to survive a New Year's Eve party with a date or sitting on the couch by yourself watching the ball drop, remember that you don't need anyone but your fine self to get 2016 off to an amazing start. Give yourself some love — you deserve it.

1. Make out with the inside of your elbow

If you want to get 2016 kicked off right, rely on the one person who never lets you down — yourself. This move is dumb easy. Simply raise your elbow to your lips, and give it a smooch. Bonus: since this move only requires one arm, you don't even have to put down your champagne glass.

2. Wrap your hands around the back of your neck

Another oldie but goodie. Put your arms around your back, and place your hands on the back of your head and neck so that it looks like someone is making out with you —classic, and possibly even a little convincing. (OK, probably not at all convincing, but it's a new year and you DGAF what the haters have to say.)

3. Wear a cardigan, and THEN wrap your hands around the back of your neck

This one requires an extra step, but that's OK because it's 2016, and you're not cutting any corners this year. Make sure to bring a cardigan with you to the night's festivities, and then when the time is right (approximately 11:59 p.m.), put it on backwards around your front. Assume the "Wrap Hands Around Neck" kissing position mentioned earlier, and boom: it looks like you have a real life human entangled around your being.

If one of your 2016 resolutions is to be more openminded toward selfie sticks, or if you simply want photographic evidence that you did, in fact, have a kiss this New Year's Eve (even if that kiss is with yourself), this is the position for you. Pucker up, and position the selfie stick so that it looks like whoever you're kissing is standing just outside the frame of the photo. Brilliant. Just know that if you try this, you'll also be that girl with the selfie stick at the New Year's Eve party. Which isn't a bad thing — it's just good to mentally prepare yourself for that title in advance.

You're already checking out your reflection — because damn those sequins look good — so go ahead and give yourself a quick peck. It's basically the same as kissing another person, only that other person is the incredible, amazing you.

6. Mistletoe and chill — by yourself

Sidle up under the mistletoe, and have a romantic moment with yourself. You're not going to find any better person to hang out with on New Year's Eve, and honestly, I can't think of a more rad way to usher in 2016 than by basking in the glory of your own greatness.

7. Keep your lips occupied with another glass of champagne

While everyone else around you is making out, take this opportunity to down another glass (or bottle) of champagne. New Year's Eve kisses are overrated.

8. Go for a Hershey's Kiss instead of a real life kiss

Because chocolate is greater than people, and I don't foresee that changing in 2016.

More like this
23 Super Sweet Things To Write In A Valentine's Day Card
By Karen Belz and Lexi Inks
12 Aphrodisiac Desserts To Spice Up Your Valentine’s Day
By Kaitlyn Wylde
TikTok's Voluntary Celibacy Trend Has Sparked A Movement
By Lexi Inks
Here’s What TikTok's "Mascara” Trend Is *Really* About
By El Hunt
Get Even More From Bustle — Sign Up For The Newsletter
From hair trends to relationship advice, our daily newsletter has everything you need to sound like a person who’s on TikTok, even if you aren’t.