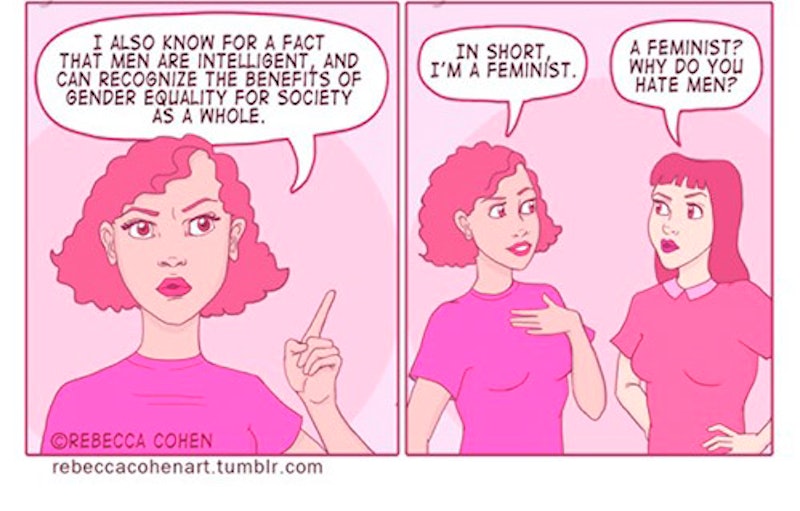 A common argument among men's rights activists and other anti-feminist groups is that feminists hate men. It's somewhat unbelievable that we still need to explain that no, feminists don't hate men — but to make it a little easier, this comic by cartoonist and illustrator Rebecca Cohen does an excellent job explaining exactly why the "feminists hate men!" accusation is so off-base. Feminism, the comic points out, deems men capable of not oppressing women: "I believe men are rational human beings, not mindless beasts enslaved by their own sex drives," the main character says. She adds, "I believe men are emotionally mature and compassionate enough to treat all people with respect" ... before another character walks in and accuses her of hating men because she is a feminist.

The comic, which Cohen is selling as a refrigerator magnet and sticker on Etsy, illustrates a frustration a lot of feminists have with the "feminists are sexist against men" stereotype. Feminists not only have called out the myth that men can't help but harass, assault, and commit violence against women but have also challenged the way gender puts us into boxes — only women can cry, only men can be good at sports, men have to date women, etc. — so that all people can express their personalities in all their complexity. Men seeking liberation from society's constricting standards of masculinity would find far more support in feminism than men's rights groups.

Here, check out the full comic:

In addition to the good old "feminists hate men" cliche, feminists face a lot of other stereotypes aimed at discrediting their position. But most people who know a fair number of feminists (and you probably do, because 23 percent of women identify this way) could tell you that the stereotypes below couldn't be further from the truth.

Many feminists are angry, because there are a lot of injustices in this world to be angry about. But we are not, as the stereotype goes, simply angry people who use feminism as an outlet for our anger. We are just as good-natured as any other group, and like all people, we sometimes get angry.

2. "Feminists Are Just Lashing Out Based On Their Own Personal Problems"

A man once told me he believed most feminists have been abused. Feminists believe many women are mistreated, he said, because they were mistreated. Well, women who have experienced sexual assault, domestic violence, eating disorders, workplace discrimination, and other problems that disproportionately affect women are not alone, so it makes sense that having these firsthand experiences would make people want to combat the societal factors contributing to them. There's an old feminist saying that the personal is political. The problems affecting many women's and men's personal lives really are larger than each individual and worth speaking out about outside of a therapist's office.

3. "Feminists Have No Sense Of Humor"

On top of the stereotype that women in general aren't funny, there's also a stereotype that feminist women in particular are incapable of taking — or telling — a joke. Some jokes really are offensive and just not funny, but some of the best jokes addressing gender (like those told by Amy Schumer in the Glamour Awards speech above) were created by feminists. Schumer, Tina Fey, Amy Poehler, Mindy Kaling, Margaret Cho, Aziz Ansari, and Lena Dunham are just a few examples of hilarious feminist comedians who demonstrate that feminists can and often do have a sense of humor.

Feminists don't want to hear the truth, many anti-feminists claim. If they weren't so biased by their own ideology, they would see that gender roles are based on biology, or that men are the actual victims of sexism, the argument goes. But feminists have a lot of statistics on their side — like those proving that women get paid less, that there are fewer women in leadership positions in the workforce and the government, and that there are fewer differences between genders than within each gender (e.g., there's a greater height difference between the shortest and tallest woman than the average woman and average man, and there's even more overlap when it comes to personality traits). The facts support feminism, not sexism.

5. "Feminists Are Not Feminine"

As Everyday Feminism editor Melissa Fabello points out in the video above, some people are afraid to call themselves feminists because they think wearing dresses, watching chick flicks, or doing anything else feminine disqualifies them. But that's beside the point! Being a feminist has nothing to do with how feminine or masculine you are. It does mean you don't judge people for being feminine or masculine, regardless of their gender.

Given all these stereotypes, it's no wonder most people still don't call themselves feminists. But with more accurate information spread about feminism, through creative projects like Rebecca Cohen's comics and by celebrities who are feminists, I have a feeling the number of people who identify as feminists will be rapidly increasing.