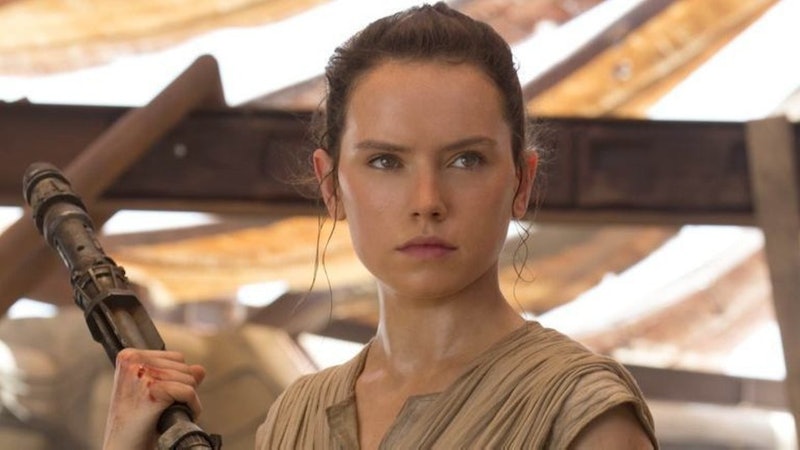 By now, you’ve noticed that two of 2015’s most epic, box-office crushing, blockbuster movies — Mad Max: Fury Road and Star Wars: The Force Awakens — have women as their main heroes. What you might not have realized, however, is that neither of those movies were marketed as specifically “feminist” movies, despite being conspicuous and deliberate departures from Hollywood's traditional films, including their male-centric origins. In both the original Mad Max and Star Wars films, the heroes were male: the titular Max (Mel Gibson), and Luke Skywalker (Mark Hamill). In these films, the stories essentially lived and died by the courage and cowardice of their male heroes.

And while female characters were present in these movies, they were far from the focus. Bustle's Katherine Cusumano wrote about how in the original Star Wars films, Padmé Amidala and Princess Leia were merely "footnotes" for the masculine journey, despite both being powerful women in their own right. "Female characters haven't been absent from Star Wars in the past, but they've been sidelined or exploited as a way to advance the narratives of their male counterparts," she wrote. The same can be said for the original Mad Max films; the star is driven to heroism by the casualty of his young wife, and women are largely irrelevant. Yet in these two franchises' 2015 reboots, the iconic male roles are usurped by women. In a rare twist for film, the once-lead male actors become incidental to the stories of the main women. Imperator Furiosa (Charlize Theron) and Rey (Daisy Ridley) carry on the legacy and iconography of the blockbuster heroism experienced by their male predecessors, and one of the most interesting aspects of this turn is that there isn't an ounce of ceremony to announce the change.

Although the casting of Theron and Ridley certainly gained notice when they were announced, neither Mad Max: Fury Road or The Force Awakens made it the focus of their marketing campaigns. They simply stated the casting decisions as fact, and didn't make the films' newfound feminism central to promotion. In a way, they Trojan horsed two history-making female leads into pop culture. And, by foregoing media saturation of the “female led” angle, both Fury Road and TFA managed to create a powerful sense of belongingness for women in film.

2015 has been a great year for women breaking ground in entertainment, from Amy Schumer’s Trainwreck reimagining the female romantic lead to Carol and Suffragette highlighting women’s history as worthy of retelling to Amazon’s Transparent exploring modern femininity through a queer lens. Women’s stories and perspectives are, finally, increasingly being given a voice in film and television. These cinematic representations of women are revolutionary and wonderful, and they bring to light those that let us down, like the one-dimensional Black Widow in The Avengers: Age Of Ultron, and the high-heeled, irritating Claire in Jurassic World . It's crucial that we acknowledge when women are portrayed with empathy and honesty on screen and that we celebrate it wildly, because despite 2015's success, female-centric cinema is still so rare. Until female-driven film is considered a cinematic norm, we — audiences and Hollywood alike — need to keep making a ruckus about it.

However, occasionally, studios fall into the trap of using women-led cinema as novelty marketing. For instance, in my opinion, the hype surrounding the all-female Ghostbusters does a disservice to the film and its talented stars; it’s kind of like Hollywood saying, “Look at this good thing we’re doing for women, by letting them do man things!” While it's certainly commendable that more female-led films are being made, remaking male-led ones with women isn't necessarily the answer. What’s more important than rewriting a problematic past is establishing a fair and balanced future — and that means creating roles and movies for women that are new and important, like Fury Road and Force Awakens both do.

What these two movies are achieving for female-led film is thrilling. Whereas Hollywood says “women don’t sell movies” and thus often puts female characters only in supporting roles, Fury Road and Force Awakens do just the opposite. The films prove that female-led films can be blockbusters — Max Max took in over $373 million at the box office internationally, while Star Wars made more than $1 billion in 12 days — and they also remind us all that a feminist movie can be just that without having to have its feminism be key to its promotion. The two films embraced their female leads with nonchalance, simply presenting women doing things we’ve seen men do a thousand times before. They're not "women's movies" — they're just movies, albeit hugely successful ones.

Audiences are more willing than ever to accept powerful female leads, and Hollywood has (slowly) begun making them more commonplace. The creation of soon-to-be-iconic characters who let little girls dream of becoming apocalyptic road warriors and Jedi knights, the way little boys have always been able to, is playing a powerful role in normalizing gender equality on an even grander scale. And, by not making the gender of their lead characters a "thing" in their promotion — but simply letting them exist — Fury Road and Force Awakens are quietly changing the face of cinema. Female heroes shouldn’t be a special thing in cinema, but the norm, and two of the biggest movies in 2015 are working hard to make that a reality.

More like this
Who Are The 6 Illuminati Heroes in 'Doctor Strange 2'?
By Grace Wehniainen
The 'Hocus Pocus' Sequel Finally Has A Release Date & It Makes Total Sense
By Shannon Barbour and Radhika Menon
What Does Doctor Strange’s Third Eye Mean?
By Arya Roshanian
Elizabeth Olsen's Chris Evans Friendship Update Was Accidentally Hilarious
By Grace Wehniainen
Get Even More From Bustle — Sign Up For The Newsletter