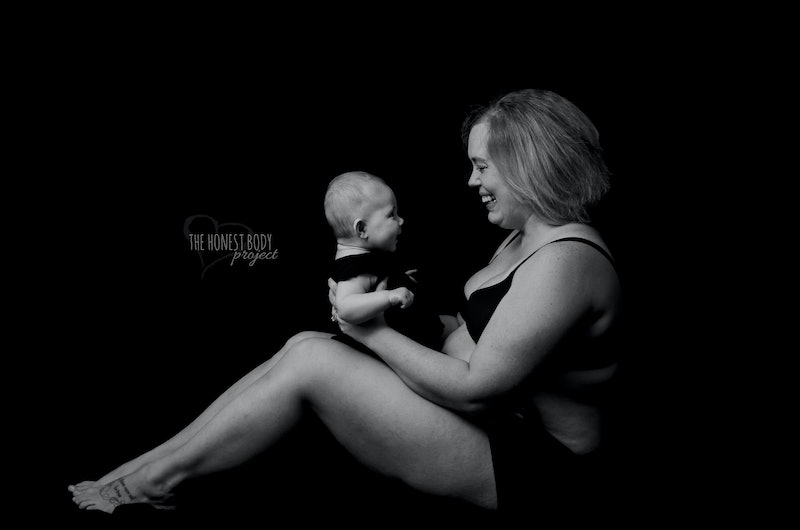 Imagine people struggling with mental illness standing on one side of a room, and on the other side are new moms: In our minds, the two rarely collide. But now, photographer Natalie McCain is using The True Faces of Depression to shed light on mothers with mental illnesses. The stunning black and white series of photos, part of a larger gallery called The Honest Body Project, aims to end the stigma attached to people with mental illness, something that affects nearly 20 percent of adults in the United States.

McCain's series features moving photos of new moms, sometimes alone, sometimes holding their children. They're shown in their undergarments, and for a good reason: "The Honest Body Project photographs women in a new light with untouched portraits to help fight the messages society send that all bodies must be 'perfect' and look a certain way," McCain says on her site.

The series shows these women natural and beautiful, flaws and all — and each one of them openly discusses their fight with mental illness, whether it be anxiety, depression, PTSD, or something else entirely. McCain can fully relate to these women; she herself battled postpartum anxiety after giving birth to her second child. "Even just going to the grocery store would result in a panic attack," McCain said in an email to Bustle, explaining that natural remedies, breathing techniques, and talking with close friends have helped her get through it.

I asked McCain what she thinks mothers can do to help further eliminate the stigma against mental illness. "We need to break the silence and start to share our struggles," she explained. "When no one ever talks about mental illness, we believe we are struggling alone. So many women suffer from various mental illnesses and go through it without any support. We need to change this!"

Postpartum depression alone affects 15 percent of new moms, and the symptoms are so severe that they almost always require treatment. And we're not talking about a simple case of the baby blues, where the symptoms are far less extreme — postpartum depression can mean severe headaches and stomach problems, withdrawal from friends and family, and even thoughts of harming yourself or your baby. Thanks to celebrities like Drew Barrymore bringing the discussion of PPD back into focus, the topic has finally gotten a little more attention; McCain is furthering the battle to put a face on the illness, humanizing it and reminding us that these are regular people, like you and I.

McCain has worked with all kinds of moms who have their own unique and interesting stories; I was curious if there was anyone in particular who stuck out in her mind. "I found myself relating to each of the women in this series in various ways," she said. There was one woman, however, who came to mind. She's not a mother, but her story was important to share. She began experiencing PTSD after being sexually assaulted. "She speaks about self mutilation, which is something that is a huge problem with young girls ... It is heartbreaking to see someone self harming ... and to not know how to help them," said McCain.

This behavior is yet another thing that can make people feel alone and isolated, even though a lot of people experience these emotions. The True Faces of Depression shows us that even while she loves her child with every fiber of her being, a woman can still be suffering greatly on the inside. Mental illness can completely consume you, swallowing you alive for years on end. That's what some of these mothers are dealing with; and they're certainly not the only ones.

This is such an inspirational work of art, and it brings to light something so often kept in the shadows. You don't have to suffer alone. To learn more about The Honest Body Project, you can visit the Facebook page and enjoy more of Natalie McCann's beautiful work and words.