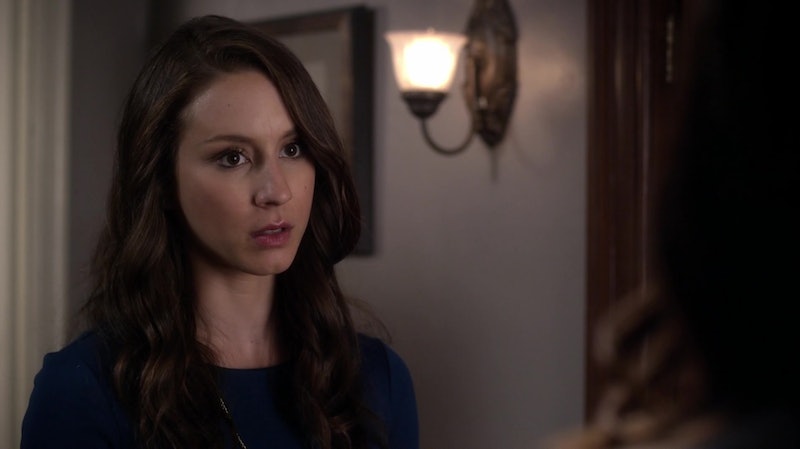 Being a dedicated Pretty Little Liars fan is a major commitment. It's not a show that you can just casually watch while scrolling through Instagram on your phone; PLL is a show that you have to really pay attention to. There are so many twists, turns, and unanswered questions on Pretty Little Liars, and sometimes it can be hard to keep up with all the action. It can also be trying waiting around for the mysteries to unfold. Basically, you need to be emotionally invested to be a true PLL fan. It's a tough life to understand, and I'm sure that you have some people in your own life who don't get it. One person who does understand the struggle, though, is Spencer Hastings. And there have probably been plenty of times when you channeled Spencer while watching Pretty Little Liars .

It might sound like something out of Inception to explain the Pretty Little Liars fan experience through the lens of one of its characters, but it really does make sense. Spencer is the most inquisitive out of all the girls. She is always asking questions to get the bottom what's going on, just like a loyal PLL viewer. She goes a little crazy when things don't go her way, which every fan can more than relate to. And even though she's one of the characters who can cause viewers to scratch their heads from time to time, it doesn't mean that she doesn't get how you're feeling. There have been lots of times when Spencer's reactions line up with the fans' ones when it comes to watching PLL.

1. When A Story Line Wraps Up & You're Waiting For The Next One

You finally get some resolve, but you know it's short-lived since the writers have already set up new questions for you to ponder for months.

2. When The Clues Just Aren't Adding Up

You thought you knew who A was a million times. You swore that you were right, but it didn't come together. You need a break from this show, but all you can do is think about its mysteries.

3. When You Thought Toby Was Dead

He wasn't your boyfriend, but you couldn't help feeling bad for Spencer. That plotline just came out of nowhere, and you were mourning the loss of your one-sided relationship with a fictional character.

4. When You Are Finally Right About Something On This Show

You've been wrong more times than you can count, so when you actually guess something right, you cannot help but feel like the smartest person ever. And that feeling lasts until the next time you are stumped about a storyline.

5. When You Can't Decide How To Feel About Mona

Is Mona a friend or foe? Can she be trusted? Do you want good things to happen to her? It's so hard to decide how to feel about Mona. Do you actually believe it when she claims to be on the same side as the Liars?

6. When You Found Out That CeCe Is A

It was crazy to fathom that there was another (assumed to be genetically blessed) DiLaurentis sibling wandering around Rosewood. How could the writers just pull this out of nowhere? How did it make any sense for Jason and Ali not to recall having a sister? You had way more questions than answers when it came to this one.

7. When You Learned That CeCe Is Charlotte DiLaurentis

You finally wrapped your head around the existence of another DiLaurentis, but realizing that sibling was CeCe was an entirely different story. How were the fans expected to process this one?

8. When You Heard About The 6B Time Jump

What's going to happen to the show now? Is it going to lose it's luster now that you know who "A" is? You are just hoping for the best when it comes to this fast forward.

9. When Ezra Admitted To Researching The Squad For His Book

Ezra was the one adult you could trust on the show. He just seemed too awkward and nerdy to be deceptive, but you were so wrong. You couldn't help being vicariously betrayed when Ezra told Aria he was writing a book about her friends. You still had faith in Ezra and hoped that things would get better once he revealed the truth.

10. When You're Trying To Piece The Clues Together

There are so many characters and story lines on PLL that it can be tough to keep up. How do you know what information you can disregard and which facts are the key to unlocking everything you want to know? It can be way too much sometimes.

11. When The Girls First Woke Up In The Dollhouse

This was the freakiest thing you'd ever seen. Someone created a dollhouse prison with exact replicas of the girls' bedrooms. This came completely out of nowhere and you had no idea where the show was going from that point on.

Maya's death was arguably the saddest loss on the show. She was so innocent. She had nothing to do with this whole "A" mess. She helped Emily come to terms with her sexuality, and Emily loved her so much. If you only cried one time watching PLL, this was probably it.

What kind of person talks about an episode before you had a chance to see it? Whatever happened to common decency? This is the absolute worst. The only one who can talk about PLL before everyone has seen it is you. Otherwise, it's just unacceptable.

Even though Spencer has put you through the ringer over the years, she actually does understand your struggle as a viewer. Yes, she is is a fictional character, but it's nice to know that when watching PLL, you are not alone.