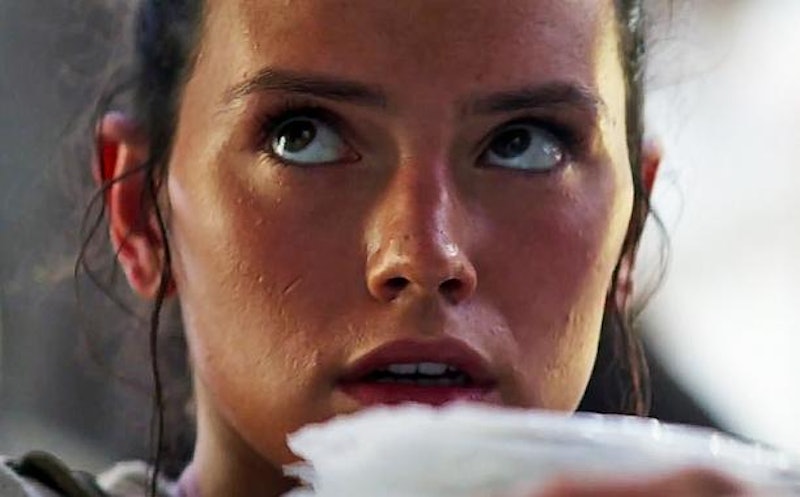 It's almost here. Can you feel it? The new Star Wars movie, The Force Awakens , is tantalizingly close to arriving in theaters, and soon fans will have the answers they seek about the most-anticipated film of all time. Is Luke Skywalker evil? Is Finn a Jedi? Who are Rey's parents? That last question in particular has inspired loads of speculation from the Star Wars faithful -- some of it likely, some of it possible, and some of it nonsense. But which of the theories floating around about Rey's lineage is correct?

Theories about Rey stand out above the questions people have about the other new characters because of the current belief that she is the main protagonist of the new trilogy -- this generation's Luke Skywalker, if you will. And after Lucasfilm president Kathleen Kennedy's statement that The Force Awakens will focus on the Skywalker family saga, it would make the most sense for that family to see its continuation in the new film's hero. Not only that, but Rey's last name has intentionally not been revealed, leading to speculation that it's something fans have heard before. So does that mean that Rey is a Skywalker? And if so, a child of which Skywalker? And is she an only child, or does she have a sibling? See what I mean? So many questions.

Perhaps the leading theory about Rey is that she is the daughter of Leia Organa and Han Solo. This would make her a member of the Skywalker clan, since Leia is Luke's twin. And it would also link her to Han, another of the big returning characters. What little backstory about Rey that's been released so far states that she was abandoned by her parents on the desert planet of Jakku when she was five years old, and had to learn how to survive on her own.

So if Leia and Han are her parents, then they're not very good parents, unless they hid her away for safekeeping. It's certainly possible that the evil First Order would take an interest in the heir to the Skywalker legacy, so passing her off as an orphan on an outcast planet may have been the only way to protect her. This could also have been the event that drove Han and Leia apart, since it seems they're no longer together in The Force Awakens, based on what has been seen and revealed. (Han joins Rey and Finn in their journey in the trailers, but Leia does not seem to be present for most of their adventure.)

There's also some evidence in one of the film's trailers suggesting that Rey is at least the daughter of Han Solo, if not Han and Leia. In a TV spot, the 1,000-year-old pirate Maz Kanata can be heard saying, "I have lived long enough to see the same eyes in different people. I see your eyes. I know your eyes," over some well-timed shots of Rey and Han. Is this just misdirection on the part of the film's marketing? Or are they dropping a not-so-subtle hint? Maz Kanata is also rumored to have been a big part of Han's life before the events of A New Hope, so it would make sense that she would have some familiarity with his eyes.

After Leia and/or Han, Luke Skywalker seems the next most likely candidate. Luke didn't have a romantic interest in the original trilogy (besides Leia for like five minutes before he found out she was his sister), so no one has any clue who Rey's mother could be in this scenario, but she could certainly be Luke's daughter. Rey is believed to come into possession of Luke's original lightsaber near the beginning of the film, and she is then thought to bring it to Leia. Does it make more sense for her to bring her mother her uncle's old weapon, or for her to bring her aunt her father's old weapon with the hope that she can track him down? Supporters of the Luke theory would cite the latter as evidence that Rey is on a quest to track down her dad, and that Luke's absence from the trailers suggests that he's definitely hiding a big secret.

Further evidence that Luke has a kid can be found in another trailer, in which he says in the voiceover, "The Force is strong in my family. My father has it. I have it. My sister has it. You have that power, too." That's a lot of family stuff for Luke to be telling someone who isn't his kid, and Rey is seen receiving his lightsaber during the voiceover. Coincidence, evidence, or misdirection? Clearly, Disney is having a lot of fun confusing people with these trailers.

Another thing to factor in with both of these theories is the identity of Kylo Ren. The film's mysterious bad guy is theorized to be the brother of Rey, with either Luke as their father or Han and Leia as their parents. It's clear that the two didn't share the same upbringing, so we're going on the assumption that they're not twins, since Adam Driver (Ren) is nine years older and does not look much like Daisy Ridley (Rey). Ren was obviously taken in by the Dark Side, and if this happened at an early enough age, then it seems likely that his sister could have been hidden away to shield her from the same fate of using her powers for evil.

Finally, probably the least popular theory suggests that Rey's parents are unknown or new characters. I don't think there's much to this, since the new trilogy is a continuation of the original, and therefore the main character is pretty much guaranteed to share a connection to the older characters. It seems much more likely that Finn is filling the random "right place at the right time" role that Han played in the original trilogy, given that he is a stormtrooper who happens to meet Rey on Jakku and falls in with her quest.

Whomever Rey's parents end up being, there's a chance that they might not even be revealed in The Force Awakens. Remember that Luke didn't learn that Darth Vader was his father until The Empire Strikes Back, and the new trilogy could take a similar approach to the family drama. Fans will find out if this is the case on December 18, but until then, let the speculation continue!