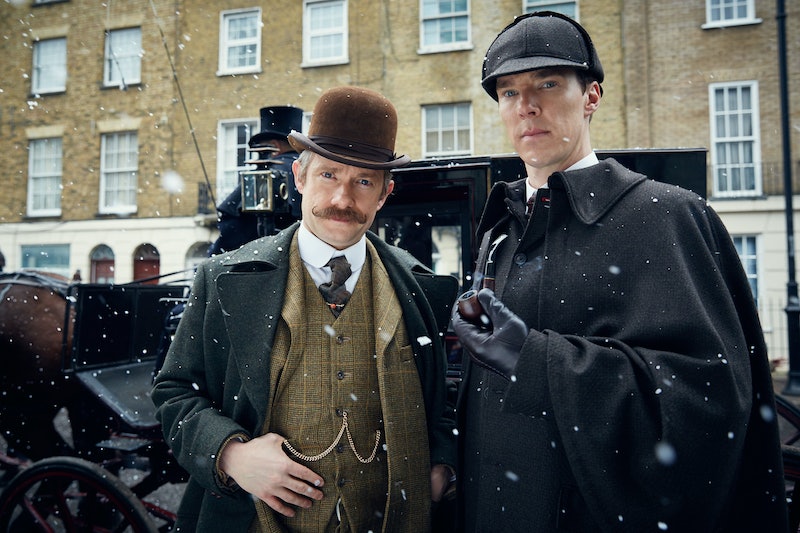 This Jan. 1, when the BBC and PBS air an episode of Sherlock titled "The Abominable Bride" — the first new episode of the series since "His Last Vow" in January of 2014 — it will be the first time fans of the show in both the United Kingdom and the United States will have gotten to watch it at the same time. And just in case that novelty wasn't enough for you, there are couple of other firsts that come along with this New Year's Day special. For one, it will be the first time fans can watch an episode on the big screen in movie theaters. And two, it will be the first episode of the series to take place in the Victorian England of Sir Arthur Conan Doyle's original stories. Does that mean that "The Abominable Bride" is based on a certain Sherlock Holmes story?

While every episode of Sherlock has been inspired by Doyle's work, none of them have been directly adapted from any one specific novel or short story. The show, which takes place in modern times, often takes some of the detective's more memorable mysteries and gives them a contemporary spin. Thus, The Hound Of The Baskervilles becomes "The Hounds Of Baskerville," a story of military experiments and hallucinogenic gases. (Similarly, A Study In Scarlet becomes "A Study In Pink" and A Scandal In Bohemia becomes "A Scandal In Belgravia.")

Unfortunately, there are no titles on Doyle's canon that directly parallel "The Abominable Bride," so it's hard to tell which (if any) case this episode is inspired by. However, one keen-eyed reader was able to find a possible hint in an 1893 short story titled The Adventure Of The Musgrave Ritual , as Holmes peruses through old case files:

"Here's the record of the Tarleton murders and the case of Vamberry, the wine merchant, and the adventure of the old Russian woman, and the singular affair of the aluminium crutch, as well as a full account of Ricoletti of the club foot and his abominable wife."

So the title must be a hint that this will be a loose adaptation of The Musgrave Ritual, right? After all, that story — which involves two disappearances, one murder, a riddle-filled treasure map, and a long-lost treasure — sounds exciting enough to fill a 90-minute TV episode. There's just one little problem with that theory: the cast and crew of Sherlock seem to be pointing in an entirely different direction.

Then, "The Abominable Bride" director Douglas MacKinnon responded with the following:

Both of those quotes are passages from an 1892 short story titled The Adventure Of The Blue Carbuncle. That case revolves around a stolen jewel found in the neck of an unsuspecting goose. Another good indication that this is the story "The Abominable Bride" will be adapting? It notably takes place immediately following Christmas — perfect timing for an episode airing one week after the holiday.

However, there's no glimpse of a precious gem in the trailer for the episode, and neither a light-hearted jewel caper nor an adventurous treasure hunt seem to fit the eerie tone the Special is going for. "Ghost stories work better in a Victorian setting," Gatiss' co-creator Steven Moffat said earlier this year. "This strand of Doyle original stories that are creepy and scary, and the chillers, we haven’t done much with in the modern show. But putting it back into Victorian times, you think it’s a chance to do a ghost story, really – a creepy, scary one."

If "The Abominable Bride" is going to be a creepy ghost story, that greatly limits the possible cases it could be inspired by, since Holmes rarely actually tackled the supernatural in Doyle's original stories. But a quick glance through the 60 titles written by the Scottish author reveals a tantalizing possibility: "The Adventure Of The Sussex Vampire." During the trailer for the upcoming Special, a frightening figure can be glimpsed; a ghostly pale woman with a frightfully red mouth:

In "The Sussex Vampire," a man comes to Holmes, concerned that his wife has transformed into a bloodsucking monster after having witnessed her standing over their son's bed, puncture wounds in his neck and blood on her lips. Naturally, things turn out to not be exactly as they seem... but it still seems like the perfect source material for Gatiss and Moffat to adapt if they were seeking to craft a chilling Victorian ghost story.

We'll find out when "The Abominable Bride" premieres on PBS this Friday, Jan. 1, at 9 p.m. ET.