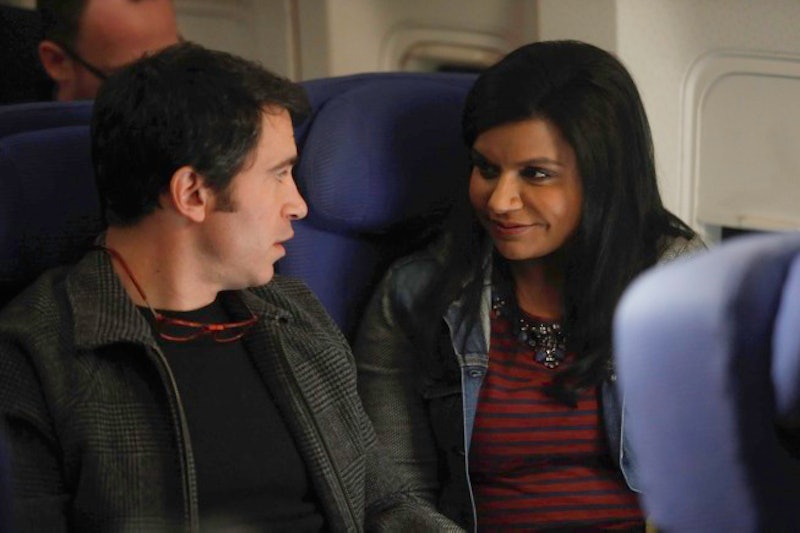 Oh my god, you guys. I can't. I can't even. That was the best. Literally, the best. Okay, no more cliched millennial phrases to describe exactly what I'm feeling right now. Just kidding, that scene was EVERYTHING. So, Mindy and Danny finally kissed on The Mindy Project 's winter finale, and it was epic. And now we're all left with so many questions: Why did Mindy think she could just get up and get tonic water herself rather than wait for a flight attendant? Is this the hottest TV scene to ever happen on a plane? (Yes, I'm looking at you, Pan Am.) Does this mean Mindy Kaling and her writers think the show might not be renewed for a third season? But most importantly, when will I realize I'm probably not going to meet my soulmate on a plane?

I'm still on the fence about whether this kiss or the Nick/Jess kiss on New Girl was hotter, but who am I kidding, I still rewound this one a couple (dozen) times. I could and probably should go on and on about how this was a weird move on the writers' part because it seems way too soon (once you give into the whole will-they-or-won't-they thing, all bets are off), but that's a discussion for another time. Let's just relive that make-out scene, shall we?

Mindy gets up to get some tonic water for Danny. Awww.

But there's turbulence and Danny gets nervous (actually, I don't blame him... flying scares the crap out of me).

And then everything makes sense.

Get a room, you guys.

And because why the heck not, here's the whole thing:

Jeeze, FOX, this was kinda dramatic, no?

Aaaand now we all have to wait two months because FOX hates us and Glee's coming back in February. It's cool though because it gives me exactly 69 days to rewatch all 38 episodes (I'm gonna need to watch that Aaliyah episode at least three more times).