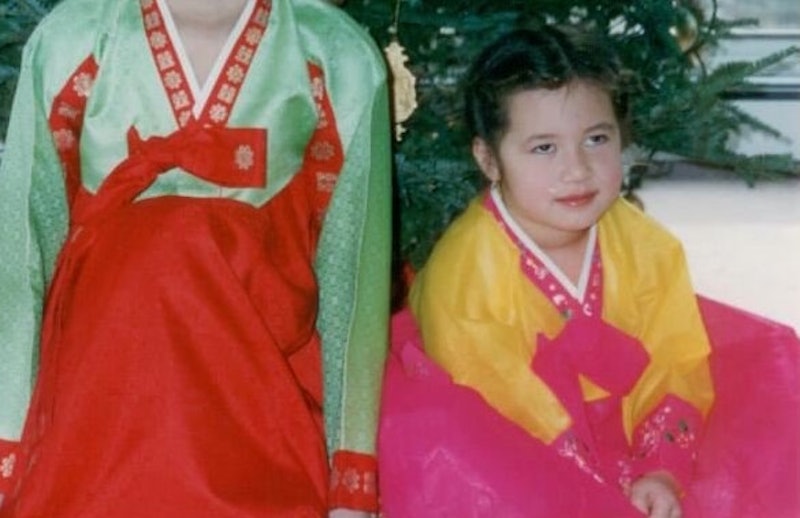 There's this old photograph of two of my cousins and me sitting in front of the Christmas tree at our uncle's house. We're all wearing brightly-colored hanboks , the traditional Korean dress, which, at the time, was my only understanding of Korean fashion. While both of my cousins are smiling at the camera, I am aggressively rolling my eyes, beyond jaded by all of the pomp and circumstance and, above all else, absolutely pissed about wearing that pink and yellow dress.

I remember being forced into that hanbok by my mother, a Korean-American woman who was born and raised in Seoul. I cried and made several attempts to rip the top off because I was convinced it looked absurd, and, if only to add injury to insult, the fabric scratched at my skin. Eventually, my mom pulled rank, tying the pink bow tightly around my chest and sitting me down in front of the entire family for that photo. But I clearly wasn't going to give in that easily. My displeasure is obvious in the image that remains.

For most of my life, that itchy hanbok was my only reference point to Korean fashion, and it certainly didn't connote anything cool. Really, nothing about being Korean was cool when I was growing up. It was something that made me an outsider and set me apart from my classmates. And those feelings of other-ness were only exacerbated by my mom's rules about what I could and could not wear.

I had some freedom at home, where I could dress up and experiment with bright red lipstick and unnatural colors of eyeshadow. I also built up a sizable collection of T-shirts with ironic phrases and band logos. But when it came to big events, or anything where family was involved, my mother had no qualms imposing her strict fashion sense on me.

Looking neat, polished, and modest always took precedence over trendiness at family dinners and friends' sweet sixteens, and my mom's tendency toward the proper also affected my day-to-day style as a kid. She took me to get my eyebrows waxed when I was in middle school because she thought they looked unruly. And one of the most common fights we'd get into were a result of her throwing away favorite T-shirts of mine or well-worn pairs of sneakers because she deemed them "too dingy," which always seemed like an absolutely arbitrary judgment call.

As I grew older and started buying my own clothes, I stopped throwing as many temper tantrums, and the war with my mom settled into a casual detente. I also started taking her advice about throwing out T-shirts with coffee stains more seriously. But perhaps the biggest difference between my youth and my young adulthood has been my willingness to openly embrace my Korean heritage. Part of that can be chalked up to maturity, and understanding that I'm never not going to be Korean so I might as well be OK with it. But my more immediate interest in Korea stemmed from the simple fact that against the odds, Korea has become kind of cool.

The ball arguably started rolling when Psy broke the Internet with "Gangnam Style" in 2012, and ever since, interest in Korean culture has been growing in the media and even among my friends, who are now excited by and curious about my Korean-ness. The most obvious example of this explosive growth has been the meteoric rise of Korean beauty, which dominated fashion magazines and beauty blogs in 2015. These days, even Kim Kardashian goes to Korean spas for full body scrubs (places my mother and grandmother have been frequenting for decades).

That newfound trendiness of Korean beauty appealed to me, especially as someone who writes about style for a living. So when I had the opportunity to spend a few months in Seoul last year, I knew I had to take advantage of it. But just because I thought Korean culture was cool now didn't mean I really knew anything about it. While I was dreaming of K-beauty domination, my mom was worried that I wouldn't have enough clean clothes to bring with me, warning me that I needed to make sure I dressed well otherwise I might offend someone, or everyone. I shrugged her off.

My expectations for Korean style when I arrived in Seoul were less than upbeat, and though they weren't as simplistic as my full-on rejection of the hanbok as a child, most of them weren't exactly flattering. My mom's constant nagging about always looking good gave me the impression that Koreans placed huge emphasis on the superficial, going to any length to look good and achieve the standard of beauty prescribed by society.

I had also read stories about the constant pressure to lose weight, the prevalence of eating disorders, the wacky ingredients women would slather on their faces to get rid of wrinkles, like snail slime or placenta, and was pretty horrified by the statistics around plastic surgery. According to The Atlantic, approximately one in five Korean women has gotten cosmetic surgery, compared to one in 20 American women. I was ready for a country where competition to keep up with the Joneses — or the Parks and Lees, as the case may be — was the prevailing driver of trends.

Some of these assumptions turned out to have kernels of truth to them. I saw crude ads for liposuction and jawline reductions in nearly every subway car in which I rode. I passed by women in Apgujeong, a neighborhood known for its high density of plastic surgery clinics, walking around with bandages wrapped around their heads as they strolled into the nearby Hyundai Department Store, presumably to purchase a Prada purse.

I also found myself on the receiving end of comments from Korean friends, and even strangers, about my own appearance that, at first, served to solidify my belief that Korean society was deeply superficial. My aunt would make nearly daily comments about my weight, congratulating me when I went on a run or seemed to lose a couple of pounds, while simultaneously asking me if I'd eaten enough food that day. A salesclerk at Olive Young, the Korean equivalent of Sephora, came up to me while I was browsing the skincare aisle one day, pointed at the zits that had popped up on my forehead, and asked, "Do you want to do something about those?"

What I soon realized after being barraged by these judgments day after day was that the tone, though blunt, was usually meant to be helpful in some way. They reminded me of the comments my mom would make when I was younger. Yes, I hated being told that my shirt looked gross, but I did usually look more put-together once my mother's exacting eye went over me once or twice.

And as I spent more time in Seoul and learned more about Korean fashion trends and beauty routines, I began to understand the deeper, cultural logic to what I had initially perceived as arbitrary preferences. The emphasis on appearance was much less shallow than I initially thought, and fashion choices and beauty practices tied deeply to Korean culture and society. "Weird" Korean beauty trends started to feel much less wacky, and learning more about how to dress and carry myself in Korea helped to shed light on Korean culture more generally.

The pressure to fit into Korean society's strict standards of beauty is pervasive, and it certainly can have unintended, negative consequences, but the emphasis on physical perfection isn't necessarily nefarious. It makes sense in the context, where the social structure is set up in such a way that your reputation and your family's reputation precede you. In that scenario, you don't want to be the one to mess up your family's good name by dressing like a slob.

Even the decision to get elective cosmetic surgery started to seem more reasonable to me. In a job application process, candidates must almost always include a photo with their resume, and looking conventionally attractive is pretty closely correlated with getting hired, especially when many employers expect a certain look that includes big eyes and double-eyelids. Plastic surgery is no casual thing, but the procedure somehow seems more imperative when it could be the difference between getting a job or not, and many of your friends have already done it anyway.

Impressing others is one driver of this desire to appear put-together, as is a deep-seated respect for others. At barbecue restaurants, for instance, I'd be handed giant plastic bags in which to put my coat, scarf, and purse; it was explained to me that this was to avoid reeking of seared beef afterward. Not because it might be gross for you, but because it might offend those around you. Even the whole idea of going to a day spa, or jimjilbang , scrubbing your skin until it's raw and red to remove all of the dead skin, is related to this desire to be hygienic and not gross other people out.

Suddenly, my mom's fondness for "clean" T-shirts started to make sense as a cultural preference rather than a personal one. It's not just my mom. It's Korea. Her insistence about dressing well comes more from the desire not to embarrass the family, and for me to present myself to others in a way that will make her proud. Wearing clean clothes and taking care of my skin and my body are also ways to set myself up for success, and to show others that I consider them highly enough to change into a clean, unstained T-shirt. Keeping up with the latest beauty products and fashion trends, especially in Korean society, is one way to show to the world that I have my act together in some fundamental way and that I get the rules of the game — something I didn't understand until going there.

I've fallen hard for Korea and am endlessly impressed by the country's ability to bring traditional values to modern life, and how even the trendiest fashions have roots in the old. Even hanboks have made a comeback, heralded by Vogue as Seoul's newest street style trend. Once outlandish looks feel more reasonable because I have more context, and Korean culture makes so much more sense because of that better understanding of Korean fashion and beauty. Going to Seoul helped deepen my understanding of Korean beauty trends, but I also came back with a better appreciation for Korean culture and, more personally, my mother's point of view. And, in more ways than one, I have to thank the popularity of K-beauty, K-pop, face masks, and even Psy for getting me there.